How do you think this – the current crisis – is going to play out?

Will the economy “recover” and everything go back to normal?

Will the economy continue to deteriorate, even collapse – and with it, the social order?

Given almost unprecedented (in modern times) unemployment combined with the disappearance of comparable job opportunities as a result of off-shoring – which will likely make the current 20-something-percent unemployment persistent;

And given the enormous net worth loss suffered by most middle and even upper middle class Americans as a result of the collapse in real estate values (and, by dint of that, their 401k values);

With their fixed costs – especially mortgages – largely the same (or even higher, in the case of taxes, including real estate taxes and the new soon-to-be-here healthcare tax that will be imposed on millions of Americans to fund Obamacare) …

I see dark times ahead.

Demand for services and entitlements is going to increase at exactly the moment the tax base is dwindling. This will put more pressure on people who are still able to pay taxes, eventually pushing more of them into the “need services” category.

Any business not selling essentials is apt to see less business as the people who still have discretionary income grow increasingly reluctant to buy anything they don’t absolutely have to. This will result in more layoffs, more home foreclosures… more demand for “services.” And so the death spiral will continue… .

There is only one thing that might save us from a systemic collapse (and some form of autocratic Second or Third World-like government run openly by and for the benefit if the ruling oligarchy). That one thing is jobs. Jobs comparable in pay and security to those shipped to China and Mexico and Indonesia and India by our corporate ruling class as a result of the “free trade” policies of NAFTA and GATT, passed back in the 1990s.

But that would take a sea-change shift in national policy, which is probably not going to happen before there is a major crisis – perhaps the crisis, which will formally end the American Experiment and replace it with something more along the lines of the system in China or Mexico. To a great extent, we have this already, of course. But it’s not official policy and we still have at least the veneer of a constitutional system and the rule of law.

We are, I think, very close to the edge.

If the national leadership doesn’t do something profound, soon, to save the American middle class, then America will be past saving. 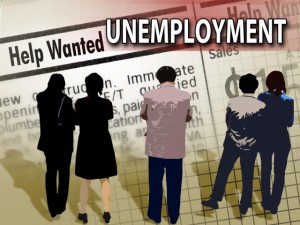