Why do Porsches continue to sell?

You can get exotic car performance in a modern car for much less than exotic car money. A slightly tweaked Mitsubishu EVO will do 12 second quarter miles. It costs less than $35k, brand new. A $60,000 Corvette is as quick – and fast – as a six-figure 911. The ‘Vette handles as well, too.

So… enter the Boxster.

It manages the neat trick of being at least somewhat reasonably priced while still providing the full Porsche Experience. A significant update for 2010 that includes the addition of a new hardtop Spyder version to the lineup makes Porsche’s entry-level model even more appealing.

The Boxster is a two-seat, mid-engined, rear-wheel-drive sports car available in standard roadster (soft-top convertible) and hard-top coupe (Spyder) bodystyles. Base price is $47,600 for the roadster; $58,000 for the roadster “S” with larger, more powerful engine and $61,200 for the Spyder hardtop coupe.

Base models get a larger, more powerful 2.9 liter version of the famous Porsche flat six “boxer” engine; S models get a direct-injected version of this engine bumped-up to 3.4 liters and 310 hp – making the 2010 Boxster the most powerful version to date. Both base and S models can also be ordered with Porsche’s superb PDK fully-automated seven-speed manual transmission. The front end has been restyled to look more 911-like and the interior has been updated with a new LCD display and hard-drive-based GPS system.

Mid-engined handling/balance unmatched by anything in its price range except perhaps a Lotus Elise – with vastly better day-to-day livability.

Acceleration/power/handling/braking (including base versions) worthy of the Porsche crest, but at a manageable price point.

An instant classic that won’t look dated even 10 years from now.

Membership in a very exclusive fraternity.

If you’re over 40 – or more than six feet tall – getting in and out can be awkward (or painful).

The standard Boxster comes with a 2.9 liter, 255 hp “boxer six” (the name derives from the fact that the cylinders oppose each other instead of being arranged in-line or in a “v” configuration; this engine layout is a Porsche signature feature). It is paired with either a conventional six-speed manual transmission with a driver-operated clutch or (optionally) Porsche’s Doppelkupplungsgetriebe (PDK) fully-automated manual, with the clutch engagement controlled entirely by computer. The PDK transmission has seven speeds and features fully automatic gear changes or driver-controlled gear-changes.

Boxster “S” models get a larger, 3.4 liter version of the boxer six with direct injection. It produces 310 hp and comes with either the six-speed manual or the seven-speed PDK gearbox.

With the 255 hp engine, the Boxster can accelerate to 60 mph in about six seconds flat; the S version gets there about a second faster.

Fuel economy is very good for a car of this type – 19 city, 27 highway for the standard model and virtually the same (19 city, 26 highway) for the Boxster S. Data for the soon-to-be-here hardtop Spyder wasn’t available at the time of this writing, but it should be even better since the Spyder ought to be considerably lighter than the convertible roadster version.

Short of a Lotus Elise, nothing compares – and the $47,250 Lotus Elise is unusable for drivers over six feet tall or who need to take more than what they are wearing with them, or who want a car that has some suspension compliance built in and doesn’t feel like it’s riding on run-flat tires and aluminum body mounts.

It has a not-unreasonable ride, virtually nil cowl shake, doesn’t leak (rain or wind) has more legroom up front for the driver and front seat passenger than you’ll find in some sport sedans – and a lot more trunk (because you have two, one up front and one in back) than just about anything else its size with two doors.

The Boxster’s engine – base or S – sounds so sweet you’ll want to record an MPEG file of it to listen to on your iPod or use for a ringtone. Though all modern Porsche engines are water-cooled now, the distinctive thrashy, spitting sounds are still there – immediately noticeable as soon as you key the engine to life. An optional sport exhaust is available to make even more of this pleasure – the raspberry reverbs calling to mind visions of the Nurburgring, with you at the wheel.

A Boxster is not the quickest thing on the road, but acceleration is not the only facet of sports car performance.

The Boxster’s mid-engined layout has the engine mounted behind the driver but not behind the rear axle (as in the rear-engined 911), giving the car almost perfectly balanced 50-50 weight distribution as well as superb traction/grip.

Going up and down a series of “S” turns where the suggested speed is 45 mph is easily done at 70 without any sign the car is approaching its limits. There’s barely any tire squeal until you’ve really begun to push it – and I mean massively. The Boxster is so good it almost makes you feel inadequate as a driver (unless you’re a pro) because most of the time it’s not even trying even though you’re already at or near your own limits.

You’ll read reviews of other sports cars that talk about “effortless” cornering, but there really is nothing like a mid-engined Porsche.

There are only two downsides. The first is getting at (and servicing) the engine – if you can figure out where it is. The flat six is buried deep down in the car, and many covers must be removed just to get a glimpse of it. All that’s normally visible in the “engine compartment” out back is a fill neck for engine coolant and a dipstick for the oil. The battery is accessed under a plastic cover up front. This is not a DIY-friendly car! But that’s the price you pay for the mid-engined layout.

The other price you pay for the mid-engined layout is that when it does finally let go in a corner, it lets go more abruptly (and usually, at higher speed) than would happen in a rear-drive sports car. This is the double-edged sword of the Boxster’s formidable handling prowess.

It really is an expert’s car – and not to be taken lightly.

The optional PDK transmission is nothing less than the best such transmission on the market. In automatic mode, it functions as smoothly as the best real (that is, hydraulic) automatics currently available; you would never believe there is a clutch in there somewhere if no one told you. The car starts out perfectly from a stop; no lurching backward then forward again – and no sense whatsoever of clutch slippage. Gear changes are subtle and perfectly timed. In manual mode, it changes gears with both precision and perfection. Even the best (including pro drivers) can’t shift perfectly every single time.

For the ultimate in PDK performance, you can order the optional Launch Control system. It does the same thing as revving the engine and slipping the clutch for a maximum-effort acceleration run – only the computers and actuators do the whole thing for you. Just nail the throttle and go.

I generally prefer shifting for myself and up to now have never liked automated manuals, but the PDK works so well that if I were going to buy a Boxster I would give it serious thought. The only downside is the cost; $3,400 would buy a decent used Corolla so I could keep the Porsche in the garage on rainy days.

The exterior updates are significant but not dramatic; Porsches tend to evolve rather than change dramatically. There’s a new face, with 911-like swept back headlights and brighter LED-illuminated tail-lights. My test car was a dark forest green color that I really liked because it wasn’t as noticeable to the cops – but you can choose from a color palette that includes almost any color imaginable and if that’s not good enough, you can order custom colors – though this, too, will cost you.

In roadster models, you can lower the top with the car moving – up to 30 mph. This is a gleeful slap in the face to the suffocating safety-uber-alles orthodoxy that afflicts so many other cars.

Utility-wise, the little Boxster is amazingly well thought-out. For openers, the passenger compartment is extremely roomy, with a 2-3 inches of clearance between the top of your head and the soft top – even if you’re a six-footer like me. In this respect alone it is superior to most other roadsters on the road today. At 6 ft 3 and 210 lbs., I can’t comfortably drive a Lotus, for example. Or a Mazda Miata, or a Honda S2000. They’re all just way too small. No problem in the Porsche.

But that’s not the only area where the Boxster shines.

The thing also has room for stuff. More room, in fact, than just about any other two-seat compact roadster out there.

Remember: There are two trunks in the Boxster – one up front, the other out back – with a combined capacity of* just over 10 cubic feet. That beats the BMW Z4 (9.2 cubic feet) and absolutely creams the recently deceased Saturn Sky/Pontiac Soltice’s pathetic 5.4 cubic feet. The mid-engined Lotus Elise is closest to the Boxster in layout and price and performance, but it’s much smaller and far more cramped – with even less cargo capacity (4 cubic feet) than the handbag-sized trunk of the Sky.

All this room – given the kind of car we’re talking about – makes the Boxster a lot more useable as any everyday driver than many (maybe all) other cars of its type.

You’ll also find a pair of equally usable pop-out cupholders that tuck into the dash on the passenger’s side of the car – and a few storage nooks/cubbies sculpted into the console and elsewhere. Most roadsters are like Saturday Night Special handguns – good for a single purpose and useless for just about everything else. The Boxster’s design is remarkably practical – especially for a car that gives up nothing as a sports car.

The only negative is the poor visibility to the side, with the top up. Blind spots can make it difficult to judge whether traffic’s coming when trying to merge onto a road. It’s an issue that most convertibles suffer from.

The new Spyder model should be a lot better in this respect.

Porsche paint jobs look liquid – as though the car had been hot-dipped in a vat of PPG’s finest. Even the underside of the trunk/engine cover are meticulously finished – with more gloss and depth than the exterior surfaces of lesser cars.

The Boxster may be the least expensive model in the Porsche lineup but it has the same high-end attention to detail you’ll find in the Cayman or 911. It’s so good you wonder why people buy 911s – other than to show off what they can afford to spend.

Safety equipment includes outstanding brakes (even on the base Boxster; the S version gets even better stoppers) and Porsche’s equally outstanding stability management system (PSM), which combines electronic stability control and traction control. The PSM system gives you a lot of free reign before it cuts in and even then, it does so very unobtrusively. It is perhaps the most driver-oriented “safety net” on the market.

Roadster models have built-in structural hoops to support the weight of the car in the event you manage to flip it.

Though the 911 (and Cayman) are the focus of most of the drooling – at least, by the automotive press-* the Boxster is a jewel that should not be overlooked by anyone looking to experience the Porsche phenomenon where it really counts – out on the road. The rest of the Porsche lineup is equally worthy – but neither the Cayman nor the 911 can offer the exotic car experience without the exotic car price tag. 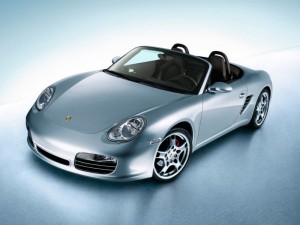