“As I was motorvatin’ over the hill, I saw Maybelline in a Coupe de Ville; Cadillac rollin’ on an open road… nothing outrun my V-8 Ford.”

But that wasn’t the point when you were behind the wheel of Caddy’s ultimate lead sled coupe. If you drove a deVille, you ran from no man.

A Coupe deVille in the driveway was, for nearly 30 years, one of the ultimate American status symbols.

Its doors were longer – and heavier – than the entire front ends of many of today’s “large” cars. Made of thick-plate steel that might have made the cut as armor for an M1 Abrams tank, they swung wide on massive hinges bushed with bronze inserts that imparted a deceptive lightness of feel. But watch your fingers! And when one of those mammoth doors got away from you in a parking lot, the consequences for the car parked next to your deVille were painful.

The deVille’s expansive hood was a flight deck of shimmering flatness whose far border was marked by the insolent wreath and crest hood ornament.

Inside, this Big Bertha easily swallowed five adults. If you were “connected,” a “made man,” there was also plenty of room in the trunk for ex-associates, too. Wire wheels, whitewalls, chrome and velour. Phaeton faux convertible top. Seven liters of cast iron V-8 under the hood. Eight liters in the final years of Glory.

What could be better?

The Coupe deVille began life in the late ’40s, when it was introduced as a high-trim, pillarless hardtop version of the Series 62 Club Coupe. The 1949 model was the first production example and was powered by a brand-new 160 hp 331 cubic inch OHV V-8 that was more powerful and efficient than the old L-head 346 engine, despite lower displacement. This engine was one of the first f the post-war engines designed to take advantage of the higher octane fuels that were just then becoming available

Interesting touches included a headliner ribbed with chrome trim plates to simulate the appearance of a convertible top. Later versions continued this tradition with vinyl roofs likewise intended to mimic the look of a convertible with its roof up. On early models, the roof was often painted a contrasting color, such as white, to enhance the effect. But unlike the Eldorado, which was available in both coupe and convertible forms for most of its production life, the Coupe de Ville was always a hardtop coupe, right through to the end.

Though expensive, a Coupe deVille was more accessible than outrageously priced Eldorado, yet it offered virtually the same hulking curb appeal – and with better body integrity than the leak-prone Eldo ragtop. As a result, it was produced in fairly large numbers, even early on – and eventually, would become one of Cadillac’s biggest sellers.

By 1956 (last year of the “first generation”) Cadillac was selling more than 24,000 Coupe deVilles annually – vs. combined Eldorado production (Seville hardtop and Biarritz convertible) of just 6,050 cars that same year.

Internally, the Coupe deVille was looked upon as Cadillac’s “money maker” – a prestige car that was also profitable. It was the model that made the lower-volume, more-expensive-to-build Eldorado possible – and it did it without in any way cheapening the Caddy mystique.

1957 marked the appearance of the second generation Coupe deVille, notable not just for its jet-age, wide-bodied styling but also for its potent new 365 cube V-8, which broke the 300 hp barrier (in the Coupe DeVille) for the first time – and for the addition of three more inches of wheelbase, now up to 129 inches from the previous year’s 126. Overall length remained the same at 200.5 inches. Weight stood at an impressive 4,620 lbs. – bulkiness surpassed only by the 4,930 lb. Eldorado Biarritz convertible.

Two years later, the deVille (like the Eldorado before it) became a distinct model line in its own right and no longer a high-end Series 62. The car was a spectacle: 225 inches long and 4,700 lbs., its stern capped off with massive pillars of steel intended perhaps to function as air rudders, the means by which the dreadnought could be steered through the ether. In fact the car was maneuvered via ultra-low-effort power steering enhanced by the mechanical leverage of a hoola-hoop-sized steering wheel. Course changes could be effected by finger-dialing to the left or right, as needed.

1965 marked a stylistic U-turn for Cadillac (and General Motors). The influence of Harley Earl, who had retired a few years previously, was waning. The new ethic, as defined by his protege and successor, Bill Mitchell, blossomed fully with the introduction of the fifth generation Coupe deVille.

Voluptuous curves and baroque gave way sharp angles and a more serious demeanor. The previous wraparound front glass was retired in favor of a smaller, flatter windshield which fed into a squared off roof that cut sharply back toward the trunk. Fins, as such, were no more. The slab-sided rear quarters now pinched upward, ending in fully integrated vertical tail-light buckets that would remain a Cadillac styling element through the 1980s. Vertically stacked quad headlights and a wider egg-crate grille up front competed the ensemble.

The ’71 restyle – which lasted through the ’76 model run – represents the apotheosis of Coupe deVille enormousness. Wheelbase grew to its ultimate expression, 130 inches, while overall length now extended nearly 231 inches from stem to stern (in ’72). A 5,000 pound curb weight was achieved the moment the driver sat down. With two aboard, a sixth generation Coupe deVille was easily a 5,200 lbs. weighty waddler.

To get it all going, Caddy plopped in a 500 cubic inch V-8, shared with the Eldorado but detuned slightly to 375 hp (vs. 400). The 1970 500 cuber would also be the most powerful of the series – but unfortunately, not for long. In ’71, the rated output of this engine declined to 345 hp (365 in the top-of-the-line Eldorado) and the trend would grow worse in the ensuing years, as GM struggled to make V-8s built for an era of Who Cares gas mileage and indifference to exhaust emissions compliant with the EPA regulated and OPEC strangled ’70s.

By 1975, the 8 liter 500 cube V-8 was making a desperately sad 190 hp, less than half its rated 1970 output. But despite this underhood emasculation, the public still revered Caddy’s vehicular blunderbuss, perhaps understanding that they would be the last of their kind.

Soon, deVille had to make do with 368 cubes and a rather wretched 150 net hp.

Two years later, in 1984, the Last of the Large left the shipyards – propelled by a completely sad 105 hp diesel V-8 hashed together in haste from an Oldsmobile-built gas V-8. It was either that or the even more problematic “variable displacement” V-8-6-4 that (in theory) operated on four or six cylinder under light load to conserve fuel but (in actual practice) was one of GM’s greatest fiascos of the century and cost the automaker dearly with consumers.

The door slammed shut for good in ’85, when a Camry-sized front-wheel-drive pretender to the laurels appeared. Cadillac would continue trying to pawn off these downscaled de Villes on an unwilling public through 1993, when the much-abused designation was finally allowed to rest in peace.

From a collectibility standpoint, de Villes – especially ’76 and older models – are very desirable. These barges are even more impressive today than they were back in the day – because the disparity between their outsized proportions and the run-of-the-mill “full size” car of the modern era is so striking. Early models through about 1976 with the 500 cube V-8 are more collectible – and command higher prices. But the ’77-84 models are almost as entertaining to operate, nearly as visually impressive – and much more affordable. They’re also much more available, having been produced in very large numbers and (for the most part) having been owned by older drivers who tended to baby them.

* The pillarless coupe design of the first generation Coupe DeVille was itended to provide the airy, open feel of a convertible with the body integrity/soldiity of an enclosed coupe.

* A deVille convertible was offered during the mid-late 1960s; however, it was not a Coupe deVille.

* Though it began life as one of Cadillac’s top models, by the ’77 model year, the Coupe deVille had become Cadillac’s entry level car, replacing the discontinued Calais in this role. It carried a base price of $9,810.

* A Phaeton Package offered in the mid-’70s was intended to duplicate the convertible “look” – similar to the chrome interior bows used in the first generation cars. 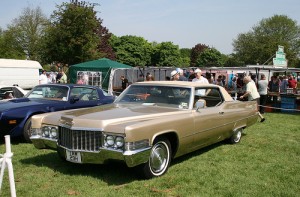