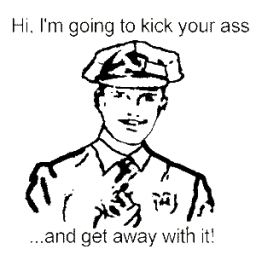 It used to be a word that carried a lot of weight. Not just morally but also – and critically – legally. You could say no to cop and, provided he didn’t have a warrant issued by a judge – or at the least, some specific probable cause that would stand up before a judge – he had no choice, legally speaking, but to back off. If he did not – if he say forced his way into your house or forced you out of your car or forced you onto the ground – the odds were pretty good that down the road, any charges leveled against you would be dropped ( “fruit of the poisoned tree” doctrine) and – even more significantly – the cop himself would likely find himself looking for a new line of work. Or at least chastened.

But that was the past, alas.

One of the greatest freedoms we have lost since 911 is that we have been deprived of the power of no. Instead, we are told we must immediately Submit and Obey – and failure to do so immediately now constitutes “probable cause” in our Brave New World. If one says no to a cop demanding ID, one can expect to be put in cuffs and thrown face down over the hood of a cruiser. If one declines to open the door to one’s  home for a cop, it is entirely likely that the cop will force his way in and if you do so much as put your hands up to ward off the blows, you will very likely find yourself charged with “resisting” and possibly “assault upon a police officer.”

Much worse, the law will back him up, not you.

Even if the door kick-down at 2 in the morning and subsequent ransacking of your home are later declared an “administrative mistake” (they meant to bash in the door of the house across the street, not yours) but you, in your fear and absolute innocence  took steps to defend yourself/your family  and in the process shot a “law enforcer,” guess who’ll be up on murder or attempted murder charges?

This has actually happened already. For instance, there’s the case of  Ryan Frederick of Chesapeake, Va.. He was charged with first degree murder for shooting a cop who broke into his home on a trumped-up drug warrant. Frederick, 28 at the time, had no criminal record and the warrant was the result of a supposed police informant who claimed that Frederick was growing pot plants. In fact, Frederick – an avid gardener –  was growing a Japanese Maple. On the basis of this, a no-knock warrant was executed – just afew days after Frederick’s home had been invaded by burglars. When Frederick’s dogs began barking and he heard someone breaking through his front door, he grabbed his gun and – quite reasonably- fired at the intruder. The intruder happened to be a cop and now Frederick awaits life in prison – or a needle in the arm. (See here for more.)

He was not able to say no.

More recently (Feb. 7) a diabetic man, Adam Greene, was beaten to a bloody pulp by several costumed Nevada Highway Patrol thugs – including multiple kicks to the head while he was supine on the ground. The provocation for this near-fatal assault? Low-speed erratic driving (caused by diabetic shock).  See here for the brutal video, recorded by the dash cam of the costumed thugs’ vehicle.

He never had the chance to say no, either.

Instead, Greene was roughly dragged out of his car – at gunpoint – thrown to the pavement and given the Clockwork Orange treatment. He never in any way resisted, unless you count attempting to ward off the blows as “resisting”- which of course is precisely how the costumed cretins look at it. “Get on the ground! Stop resisting, (expletive), stop resisting (expletive)!” they screech at the prone and clearly not-resisting figure, landing blows and kicks all the while.

Eventually, and thanks only to the publicity generated by the video evidence, Greene received a small cash settlement ($158,000 for a beat-down that puts you in the hospital with life-threatening injuries is a small settlement). According to the  Las Vegas Sun, one of the thugs-in-costume  was “disciplined.” Not fired. Let alone charged with what he – what they – clearly did: Nearly beat to death a helpless – and innocent – man.

I was thinking about all this just the other day when I was stopped by a cop for specious reasons. We live near the Blue Ridge Parkway and use it often to travel “down the mountain” and back. Last Sunday, we were headed back home after a morning outing. It was a warm day – sunny and in the mid-high 50s. Well, we get to the entrance and a cop is there, closing the gates – because of a possible snowstorm the next day. I stop to ask  why they are closing the gates now given there’s not a flake (or even a cloud) in the sky and it’s at least 20 degrees too warm to worry about snow. This was a mistake because he spied me not “buckled up” for safety. He – a 26-year-old kid – peremptorily barks at me to put on your seatbelt. I do not immediately Submit and Obey like a good serf – and this immediately  incites the fury of the cop. I have questioned his Authoritay. So I get the license and registration drill. I also have to give him my gun (I have a CHP). I also have to sit by the side of the road for 10 minutes while this dude runs his Power Trip. My wife advises me to be quiet and polite, to shut up and behave. I do not have the option of saying no, either.

None of us do anymore.

I got away without a ticket – or a Tazering – but probably only by dint of the fact that I have some media “cred” and the cop may have figured I wasn’t worth a beat down.

I wonder what might have happened to someone without any “cred” – on the side of the road in the middle of nowhere, just him and the costumed cretin…. .

Reader Question: Standing up to Coronamaniacs?