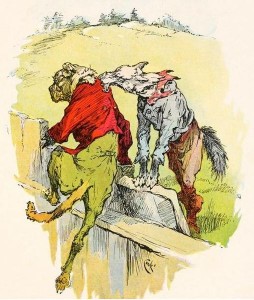 A short while back my wife pointed out this story and since then I (and my wife) have read this story to my infant son; he really seems to enjoy Eric Carle books which is great because my wife (former kindergarten teacher) has many of them. The vibrant colors and general design of the illustrations seem to really speak to kids early on. This specific story is in a compilation book of various Aesop’s Fables retold by Eric Carle.

A poorly dressed wolf with an empty stomach happened to meet a well-fed and well-dressed dog.
“Ah, hello, Cousin,” said the wolf. “How are you?”
“Don’t call me ‘Cousin,’ answered the dog. “Look at you! In tatters. And begging. It’s disgusting! Disgraceful!”
“What a beautiful dress you are wearing,” the wolf went on, “and you have such nice plump cheeks. It’s clear that you don’t know what it is to be hungry.”
“I work for my master and he takes good care of me,” answered the dog.
“I would like to work for your master, too” said the wolf, “if he’d take as much care of me.”
“Well, it just so happens,” said the dog,” that my master does need more help.”
“What kind of help?”
“We need another watchdog.”
“Can I do that?”
“Surely, it’s easy. Come along.”
As they walked toward the master’s house the wolf noticed something around the dog’s neck.
“Cousin, what is that thing around your neck?”
“That is a collar.”
“What is a collar for?”
“One can attach a chain to it.”
“A chain? Whatever for?”
“Watchdogs are often tied on chains outside their master’s house. Didn’t you know that?”
“Thank you, Cousin,” said the wolf, turning around. “I know that I’d rather be hungry than chained up like a slave.”
And with that the wolf said goodbye and left.
Being free is the greatest gift.

I was totally blown away (in a good way) by its analogy, delivery and moral. Whether the moral is realistic or pragmatic in this world can be argued but the point being made is it is better to starve free than live as a fat slave. It also made me lament how so many stories for kids focus strictly on thoughtless sharing and other collectivist/statists ideals.

Any type of discussion or essay should include definitions of the words that represent the core thoughts/ideas that are to be discussed. That way the ambiguity is removed (hopefully). Here are mine:

To be free (as in freedom or liberty) is best defined by Thomas Jefferson. “Rightful liberty is unobstructed action according to our will within limits drawn around us by the equal rights of others.” This means we are free to do what we want as long as we don’t harm or aggress against another person or their property. If something is partially obstructed then it is not unobstructed. Coercion is a form of aggression. An illustrative example would be if I wanted to put up a flag pole on my property but my neighbor did not like the “sight of it” or the flags I decided to fly. It is not his property and it is not a form of aggression, therefore he/she should have no say in the matter. He/she has a right to be offended but being offended is not the same as being harmed. Many would disagree with this train of thought but that just means that we have differing definitions of being free.

To be a slave is to be the property of and subject to another; a bond servant. You do not own your life, what you think is your property is really not your own. You exist only because your “master” allows it. I subscribe to Doug Casey’s definition: “… someone who is deprived by force of the fruits of his labor.”

The wolf is free; free to live but also free to die. Freedom is dangerous and it can be messy and painful but it is the greatest gift that is accompanied by our humanity; it is somewhat analogous to Pandora’s Box letting out all the evil in the world while also releasing hope. It is also extremely rare. Being free is a state of being, not a destination. In this way it is like a person’s health. Once it is achieved it takes a lifetime of toil to maintain it because there are those that constantly want to enslave you, especially the ones that say they are doing it for your benefit. There will be times when one feels hungry, that feeling of “hunger” can be a reminder that you are alive, and it makes the truly earned meal taste even better. To be free does not mean to be free from responsibility but your responsibilities must be the result of your uncoerced decisions and actions and not the decree of a master.

Ask yourself, are you free? Are your possessions really yours? Family and friends are important, and helping them, along with strangers can be a great and noble act, but if you are forced or coerced into helping them, are you free? If your property can be taken for the “common good” or when there is an “emergency”, did you ever really “own” it? Who decides what constitutes an emergency or the common good? If you decide to take action with your property without harming or aggressing against another person or their property, are you required to ask permission? And whose permission must you seek and how did they achieve that omnipotent position of privilege? If loans and debt were taken out by previous generations in your name, are you free? Because you are allowed to check a box in favor of Master D or Master R, are you free? Does being a master make theft or murder a noble act? These are important questions but they are also uncomfortable. Many of our mantras and dogmatic beliefs reinforce that we are free but they alone do not make it so.

The dog is faithful, well-fed, kept warm, likely has fewer worries and is obedient; but he is not free. If a dog stays loyal and remains useful they will continue to be taken care of, but once they don’t serve the purposes of the master they can/will be discarded. Obedience is the most important thing to the “master(s)”, obeying the laws and “playing by the rules.” But these rules do not pertain to the masters; they are only for the dogs. Not all masters are cruel and some may be very generous and may even truly love their dogs but this does not change the fact that they are owners (or view themselves as such).

It is important to distinguish who is a master and who is a slave. Many slaves do not even recognize they are slaves. Whether it is because they are willfully ignorant or feel the need to be part of a group, a cog in the machine if you will, they are happy with their enslavement. But that does not give these slaves dominion over others and they do not have the authority to enslave others with their “vote” even if the masters assure them they have that privilege. Many will also look for others to join the pack, in the hopes that increased numbers will legitimize the necessity of their own enslavement.

Jefferson had an important addition to the quote above I used as my definition, it is the
following:

“…I do not add ‘within the limits of the law’ because law is often but the tyrant’s will, and always so when it violates the rights of the individual.”

This is why everyone should question every law at all times. Laws are/were to be created to protect individual rights; therefore there must be a victim whose rights are being infringed upon. Any law that can be violated without there being a victim does not meet this simple criteria; this makes the law immoral and illegitimate. Laws that are made to create/sustain “order” fall into this category. Their true purpose is to create an orderly slavery among the masses and destroy individuality by making all of society scofflaws that wrongly carry a sense of guilt; there are so many laws that the average US citizen likely violates multiple state and federal laws each day (knowingly and unknowingly). The goal is to use fear to rule/enslave. I would argue that close to if not more than 90% of the laws on the books are “the tyrant’s will.” When one of these laws are brought into question a typical answer will be “because it’s the law”, this is a warning sign of an immoral law and there is a fair chance you are speaking to a slave.

From the moment I found out my wife was pregnant I was overjoyed. It was amazing to see the first sonogram, finding out we were having a son just days before my 30th birthday along with all the checkups along the way. When he was born, even though I was as happy as I have ever been in my life, I found myself on rare occasions correcting people about the fact that he was “ours.” He is our responsibility but he is not “ours”, we are his parents, his custodians, not his owners. It may be a very subtle difference to most but it is a very important distinction to me. I want him to grow up never feeling hungry but more importantly never feeling owned, as well as being able to diagnose the symptoms of slavery so that he can make sure only he owns his person.

This is a story that will be read more than once to my son, because the lesson is so important; be free; be a wolf!