If you’re really serious about saving money on transportation, the very last thing you should do is buy a new car. Particularly a new hybrid car. It’s as counterproductive as trying to lose weight by ordering a diet Coke with your triple Angus Thickburger. 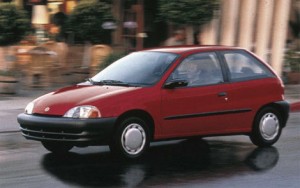 The car companies – like the fast-food places – don’t want you to realize this, of course. Their business model depends on you losing money (or gaining weight – or both).

Luckily, we’re not yet forced to buy new cars – or eat Thickburgers.

We still have the option to do something better – something smarter. And when it comes to cutting transportation costs, buying a cheapster is much smarter, money-wise, than buying a new hybrid.

What’s a cheapster? It’s a car like they ought to be making now but aren’t – for a variety of reasons, including government regulations that heavily compromise fuel efficiency for the sake of making them every more crashworthy (which typically means making them ever-more-heavy). Cars like the old Geo/Chevy Metro – made from circa 1989 through 2001. This car never had an engine bigger than 1.3 liters (many had a 1 liter engine)  because it never weighed more than about 1,800 lbs. (early models weighed as little as 1,600 lbs.). As a result, it got 42 MPG – nearly as good as a new Toyota Prius (which weighs a beefy 3,042 lbs.). 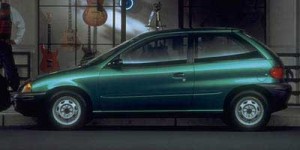 Think about this a minute. These cars cost almost nothing to buy – many people will be able to stroke a check for the whole amount, thereby eliminating the monthly payment. Meanwhile, had you bought a new Prius, you’d be paying about $400 a month for the next five years – and that’s assuming you bought one for sticker and pay zero interest. How much gas would you have to save to make up for what you just spent? Probably, you’d never reach break even. The difference in cost between the used Metros and a new Prius – about $20,000 – would buy roughly 5,000 gallons of unleaded regular at $4 per gallon. At an average 40 MPG, this is enough to keep the car going for 200,000 miles. Only then would a new Prius begin saving you money – assuming, of course, it’s still running by then.

Remember: The used Metro cost you zip per month. Your only fixed cost is fuel – and the Metro’s gas mileage is nearly as good as the real-world mileage of the Prius. (Doubters should check out a comparison test Car and Driver magazine did in 2008. A ’98 Metro hatchback was stacked up against a Honda Insight hybrid and a Toyota Prius. The Metro registered 42 MPG – right on the tailpipe of the then-new ’08 Prius’ 48 city, 45 highway.) The non-hybrid Metro is also a simple car – no battery packs or electric motors to sweat once the warranty expires. Even if the engine eventually requires work – including a complete rebuild – the work will not be cost-prohibitive. A new/rebuilt Metro engine and transmission would probably cost you around $4,000 for everything, done by a pro – and you’d be good to go for another 100,000-plus miles of 42 MPG. 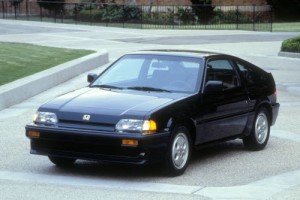 That’s how you save money on transportation, folks.

Another potential cheapster is the Honda CRX, built from 1983-1991. Like the Geo/Chevy Metro, these cars had tiny engines (1.3-1.5 liters) because they had very low curb weights –  1,713 lbs. for the HF version. These cars, which also had more sophisticated engines than the Metro,  were capable of 41 MPG in city driving and as much as 50 MPG on the highway.

Nothing that’s not a hybrid can match this performance today.

These are just a few examples. There are other makes/models from that era – the mid-late 1980s through the early-mid 1990s – that would do about as well. Lightweight economy cars were abundant then, because the government hadn’t yet effectively outlawed them. Sure, they’re not as “safe” as a modern – and much heavier – compact (which by the standards of the ’80s and early ’90s would be upclassed to mid-sized). But that’s only an issue if you get into an accident – and most “accidents” aren’t.  They’re the result of driver error – and so, to great extent avoidable. Back then, a buyer could decide that the higher everyday gas mileage of a 1,600 lb. compact was preferable to the theoretical safety advantage of a larger, heavier car. (Theoretical, because it only became a real factor in the event of an accident, which might never happen).

Today, new car buyers are denied that choice. The government has decided for you that gas mileage must take a back seat to “safety” – at your expense, of course.

Luckily, one can still do an end-run around all this by shopping for a high-mileage, low-cost cheapster instead of a mediocre mileage, high-priced “safety” car.