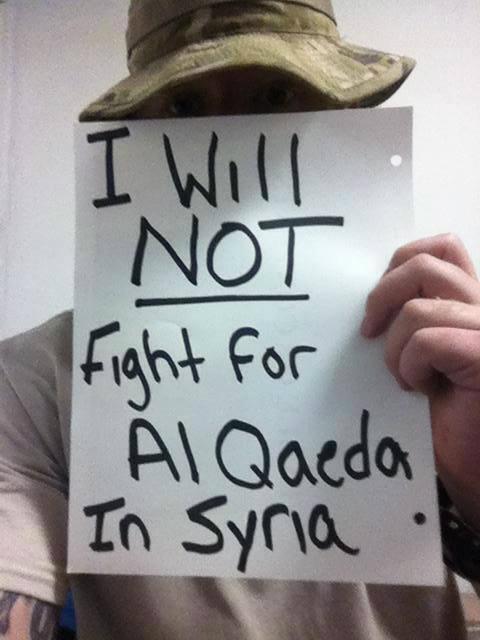 The military revolt against the Obama administration’s plan to launch a potentially disastrous attack on Syria is gathering pace, with both top brass and regular service members expressing their vehement opposition to the United States becoming entangled in the conflict.

The backlash began to spread on social media yesterday with numerous members of the military posting photos of themselves holding up signs stating that they would refuse to fight on the same side as Al-Qaeda in Syria. The photos went viral, with one post alone generating over 16,000 shares on Facebook.

Others have posted their photos on Twitter alongside the hashtag #IdidntJoin.

As the Obama administration prepares to present a draft resolution to lawmakers that is by no means “limited” in its scope and would in fact grease the skids for an open ended war, John Kerry and other State Department officials have signaled that Obama will simply ignore Congress if they vote no and launch the assault anyway.

This will do little to reassure a growing number of influential figures in the US military who are becoming increasingly recalcitrant about the United States becoming embroiled in yet another war in the Middle East.

The Washington Post reports that, “The Obama administration’s plan to launch a military strike against Syria is being received with serious reservations by many in the U.S. military, which is coping with the scars of two lengthy wars and a rapidly contracting budget, according to current and former officers.”

Republican Congressman Justin Amash also took to Twitter to state, “I’ve been hearing a lot from members of our Armed Forces. The message I consistently hear: Please vote no on military action against Syria.” Amash’s statement was followed by a series of tweets from military veterans who also expressed their opposition to the attack.

Business Insider’s Paul Szoldra also spoke to “sources who are either veterans or currently on active duty in the military,” and asked them if they supported military escalation in Syria.

“Most have responded with a resounding no,” writes Szoldra.

He quotes an active duty First Class Sergeant who states, “We are stretched thin, tired, and broke,” adding that the United States “(does not) need to be World Police.”

“Our involvement in Syria is so dangerous on so many levels, and the 21st century American vet is more keen to this than anybody. It boggles my mind that we are being ignored,” adds former Cpl. Jack Mandaville, a Marine Corps infantry veteran with 3 deployments to Iraq.

Not only are military personnel going public with their concerns, Politico reported that leaks of attack plans are also, “emanating from a Pentagon bureaucracy less enthusiastic about the prospect of an attack than, say, the State Department, National Security Council or Obama himself,” unauthorized disclosures that have the White House “peeved”.

Meanwhile, the Syrian Electronic Army hacked the official US Marines website and left an astounding message calling on US soldiers to join the Syrian Army in fighting Al-Qaeda (click for enlargement).

The full text of the message reads:

“This is a message written by your brothers in the Syrian Army, who have been fighting al-Qaida for the last 3 years. We understand your patriotism and love for your country so please understand our love for ours. Obama is a traitor who wants to put your lives in danger to rescue al- Qaida insurgents.

Marines, please take a look at what your comrades think about Obama’s alliance with al-Qaida against Syria. Your officer in charge probably has no qualms about sending you to die against soldiers just like you, fighting a vile common enemy. The Syrian army should be your ally not your enemy.

Refuse your orders and concentrate on the real reason every soldier joins their military, to defend their homeland. You’re more than welcome to fight alongside our army rather than against it.

Your brothers, the Syrian army soldiers. A message delivered by the SEA.”

View a selection of US servicemembers expressing their opposition to the attack on Syria via the #IdidntJoin meme on Twitter below.