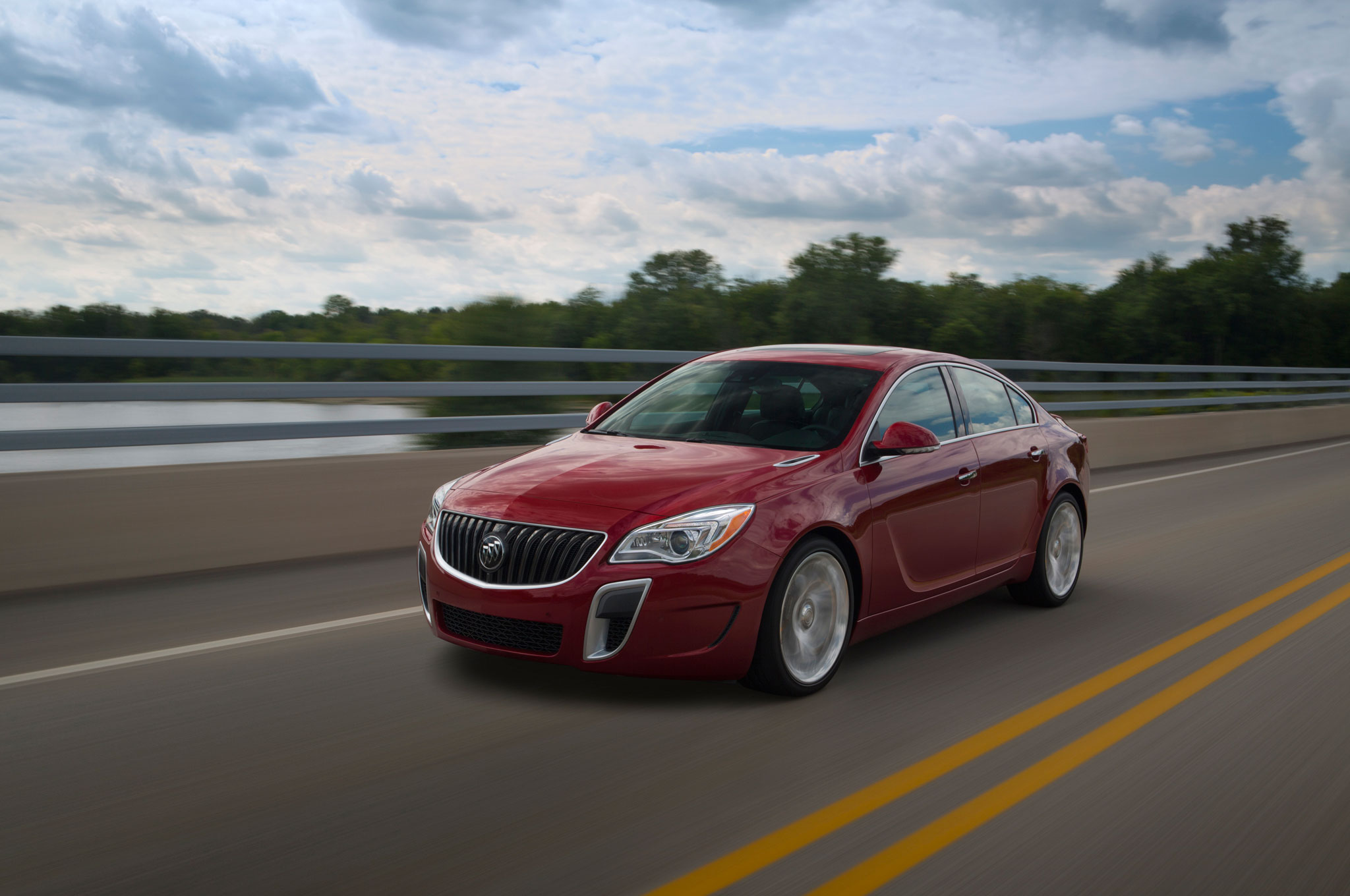 When the Regal GS came out back in 2011 as a new 2012 model, it had two very un-Buick (but extremely cool for a Buick) features: A screamin’ mimi turbocharged 270 horsepower 2.0 four (shared with the Saab 9-3, RIP) and – wait for it – a six speed manual transmission to go with it. 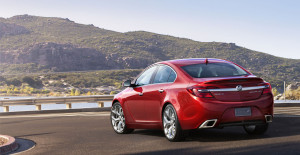 The last time Buick went off the reservation like this was way back in the mid-’80s. You may remember. The Regal Grand National (GN). Darth Vader turbocharged heavy breathers, triple black, every one. As quick as a Corvette, but with four seats and a Goodfellas trunk.

It changed Buick’s image overnight – and might have transformed Buick itself – except for one fateful thing: GM, like everyone else at the time, was switching most of its product portfolio over to front-wheel-drive (and downsized) platforms. The rear-drive Grand National had its feet – so to speak – kicked out from under it. 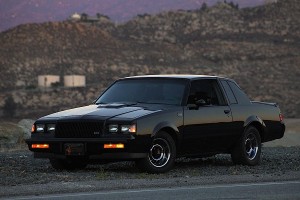 Buick settled down for the next 20 years, building Wilfred Brimley mobiles.

Then along comes this GS. Not a Brimley-mobile. Zero to 60 quicker than you can say “dia-bee-tes.”

It was a ballsy move by Buick. An attempt to dye the blue hair black again – and get rid of that “AARP” sticker on the bumper.

Three years later, Buick seems unsure of the Regal’s future. You can still get one with a six-speed manual, but the turbo 2.0 engine has been tamped down a little – to 259 hp. On the other hand, you can order one with all-wheel-drive. And the interior has been jazzed up with a new flat screen gauge cluster (similar to current Cadillacs) and an eight-inch LCD touchscreen in the center stack. 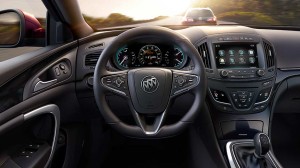 It’s nicer than ever – just not quicker than it was.

What’s it going to be, Buick? A performance car?

Or a luxury car?

The Regal GS is the sportiest version of the Buick Regal mid-sized sedan. It’s available in FWD and (new for 2014) AWD versions – with a manual six-speed transmission available either way.

A six-speed automatic is optional.

Base price is $36,905 for the front-driver with the six-speed stick. With AWD and six-speed automatic, the asking price climbs to $39,270. 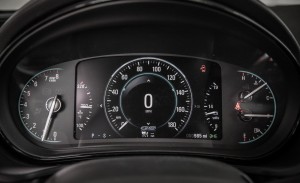 This car is still an interesting alternative to other entry-luxury mid-sized sedans like the Lexus ES350 ($37,530) and Acura TL ($36,030) neither of which offer a manual transmission. It can even be cross-shopped against sportier – but smaller – numbers like the BMW 3 and Audi A4, both of which can be had with manuals but not with more interior room .

Major changes include the addition of AWD to the options list – and the subtraction of 11 hp from the GS’s turbocharged 2.0 liter engine.

Also new is a Cadillac-esque flat-screen instrument cluster – replacing the previous analog cluster. All Regal trims – not just the GS – get a new eight-inch touchscreen monitor in the center stack for the GPS, audio and infotainment systems. 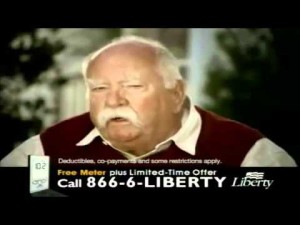 A manual in a Buick.

Roomy in both rows.

De-tuned turbo engine has lost some of its punch.

Not as quick as Acura TL.

“Haptic” (finger swipe) inputs for cabin temperature settings and seat heaters sometimes require more inputting to get them to work.

Well, least they haven’t dropped the manual trans from the roster. This bucks the trend. It’s hard to find a Porsche with a manual transmission these days. So a manual-available Buick deserves some chutzpah points.

But, the other half of the equation has been watered down some. 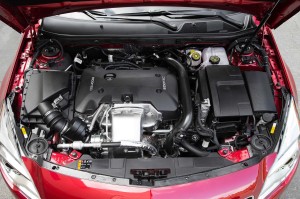 The 2.0 turbo engine that’s standard in GS versions of the Regal is still powerful. It’s just not as powerful as it used to be. Eleven hp has been lost along the way. The boost delivery is also subtler – and the final drive ratio (a CAFE friendly 2.77 in automatic-equipped cars) is less aggressive. Add  AWD and the end result is 0-60 in just over 7 seconds. This put the ’14 GS mid-pack, straight-line-acceleration-wise.

And felt it, too. 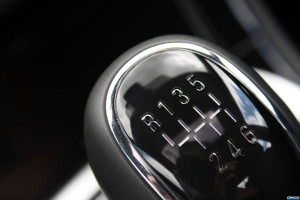 With the manual, you could launch the thing hard – bringing up the revs (and the boost) with your right foot, then sidestep the clutch with your left. Holy Metamucil, Batman! I just did a burnout  . . .in a Buick!

Channel your inner Beavis and Butthead.

Forget about all that with the automatic – and the AWD. This version of the GS is more gentlemanly.

No skittering tires, no tire smoke. Settle down, Beavis… 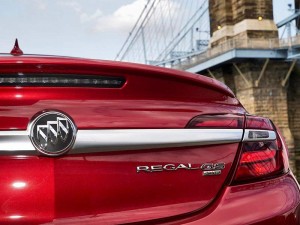 By the numbers, the automatic/AWD GS is still in the same ballpark, straight-line-wise, with cars like the Lexus ES350 (6.5 seconds to 60) though it’s not nearly as quick as the Acura TL (5.7 seconds with its optional 3.7 liter V-6).

And the availability of a manual version definitely adds something important to the mix that neither of those two automatic-only cars offer. 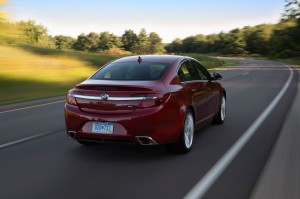 If Buick is serious about positioning the Regal as a performance alternative to cars like the Mr. Softie Lexus ES, it probably ought to deliver more performance than a Lexus ES, et al.

The six-speeded version does add excitement – even when you’re not actually driving the car. When people notice the third pedal, they do a double-take. 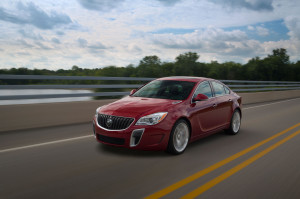 And it’s fun to be able to chirp the tires – not just coming off the line but also on the 1-2 upshift. You can’t do that in either the Lexus ES or the Acura TL.

But, be advised: Do not order AWD if you want to be able to do this.

It slows the car down, too.

Contrary to what you’d expect, the automatic-equipped GS (including AWD versions) sometimes feels – and even sounds – sportier than the manual/FWD versions.

In the manual car, you can upshift to a higher – gentler – gear and lope along quietly. The engine makes plenty of torque (295 ft.-lbs., same as last year) so it’s not necessary to keep the revs high up the dial in order to keep the car moving, even on grades. 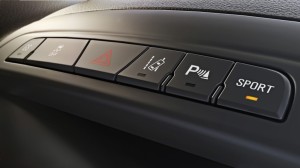 In the automatic-equipped GS, on the other hand, the transmission often seeks out a lower gear, especially on downhill stretches (for engine braking effect) and will hold it there, with the RPMs frequently lingering around 3,000-ish. Select Sport mode and the transmission gets downright belligerent – in a good way. You can almost chirp tires on the 1-2 upshift at WOT. And with a little aftermarket reprogramming, I bet you could chirp ’em.

The ride, on the other hand, is soft. Very “Buick.” 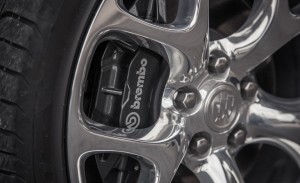 But so is the handling – notwithstanding suspension enhancements over the run-of-the-mill Regal, including front end calibrations designed to maintain negative camber during cornering.

Part of the problem is all that weight sloshing around.

It’s hard to make a two-tonner handle without also causing it to ride like a tank.

Buick does give you good brakes, though. Brembo brakes. Like that third pedal, it’s surprising to find such things in a Buick. 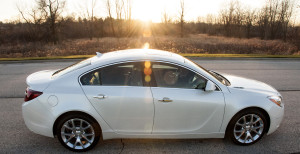 One of the Regal’s biggest draws is its size . . . relative to price-competitive sporty sedans that also offer manual transmissions.

The BMW 3 and Audi A4, for instance, are both more engaging to drive – and both offer manual transmissions. But they’re both smaller cars – with much less room in the backseat especially. 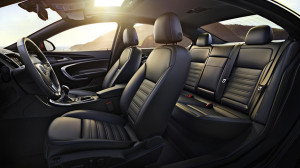 The Lexus ES has even more backseat legroom – an amazing 40 inches – but you can’t get a manual in that car.

Or all-wheel-drive, for that matter.

Buick has made a number of changes to the interior, chief among them the new instrument cluster with Cadillac-esque flat screen speedometer in place of the previous all-analog cluster. This – along with the also-new touchscreen off to the right at the top of the center stack – adds to the premium-car vibe.

But it doesn’t make the GS any sportier. 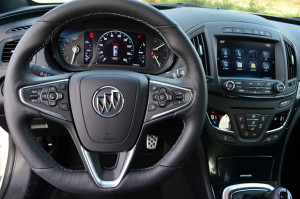 Buick does include a very nice – because very meaty – leather-wrapped steering wheel, with thumb notches and a flattened lower section (to bettter clear your knees during high-performance maneuvering). But how about a turbo-boost gauge? Why hide (or rather, not proudly announce) that this is a turbocharged performance car?

The exterior remains pretty much the same, other than a few subtle tweaks to the headlights and taillights.

It’s a tasteful-looking if not head-turning car. 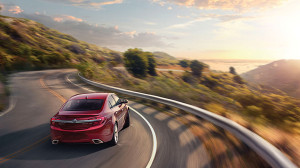 Buick has added a number of technology and safety features to the roster of standard and available equipment, including cross traffic alert, lane change alert, side blind zone alert and forward collision alert and collision-mitigation braking, which means the car will warn you with visual and auditory cues if you fail to notice something in the vehicle’s path that you probably ought to slow down for to avoid hitting – and will slow the car down for you if you don’t notice it in time to slow the car down yourself.

This is all nifty, as far as gadgetry goes. But it doesn’t do anything to enhance the performance car bona fides of the GS. 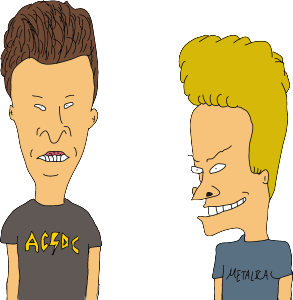 What would do that?  How about 300 horsepower instead of 259? That would instantly transform the GS from a slightly warmed up Buick to a bad-ass Buick. And isn’t that what a GS ought to be?

Just like that, the Regal GS could give BMW 3 drivers more than a run for their money – and do the Mike Tyson on cars like the Lexus ES.

You’re either in – or you’re out. Buick needs to make up its mind.

And, keep in mind: The demographic Buick craves is my demographic. Generation Xers who are in their 40s and responsible now – but still hear their inner Beavis and Butthead calling sometimes. Doing a burnout in a Buick – or at least, knowing that you could – is exactly what my crowd craves.

Forget the blue hairs. They’re never going to give up their ’96 Regal for a car like this Regal. Besides, they’ll be doing the dirt nap soon regardless. 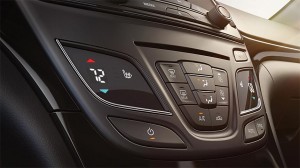 Small gripes: Buick, like Cadillac, is into fitting its cars with these flat-panel “haptic” inputs. They look cool – like the flat panel on your microwave. And the idea is good – no cracks for dust/dirt to sneak into, easy to clean (just wipe ’em down), etc. But they don’t work as well – as easily and straightforwardly – as knobs and switches. The sensors sometimes don’t sense your finger taps/swipes. And then you have to tap/swipe again. Luckily, the Regals’s haptic inputs are limited to the seat heaters and cabin temperature settings.

I can’t help thinking of Brando’s famous line from On the Waterfront: “I coulda been a contender.”

Please, Buick: Don’t let this one fade away to palookaville.

ABOUT US
Eric started out writing about cars for mainstream media outlets such as The Washington Times, Detroit News and Free Press, Investors Business Daily, The American Spectator, National Review, The Chicago Tribune and Wall Street Journal.
Contact us: Eric Peters epeters[email protected]
FOLLOW US
© copyrights by ericpetersautos.com - 2016