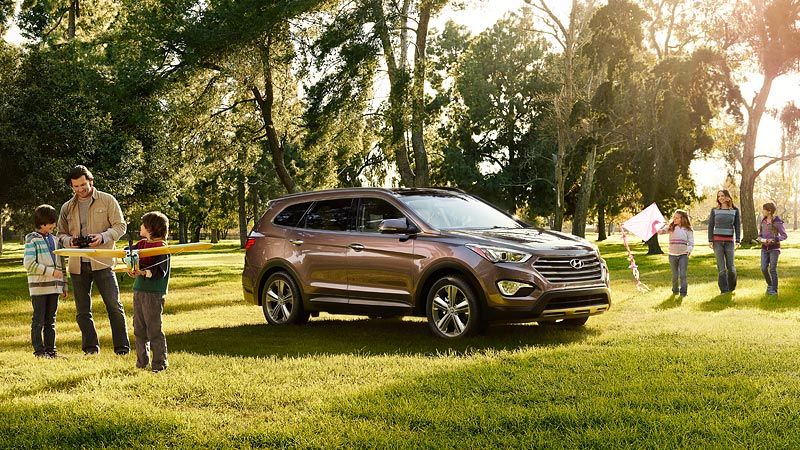 Having two versions of the same crossover is pretty smart. Not everyone needs three rows – and room for seven. 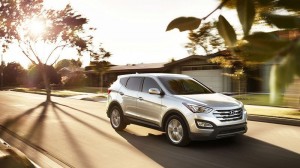 Some, on the other hand, have got to have that third row.

The Hyundai Sante Fe is the only medium-small crossover that comes both ways – take your pick.

The Sante Fe is Hyundai’s entrant in the compact and mid-sized crossover wars.

It’s available in compact-sized Sport trim – with two rows of seats and room for five and an available high-performance turbocharged four cylinder engine. Or, you can buy a larger wheelbase GLS/Limited – with three rows and seating for seven and a standard 290 hp V-6 under the hood. 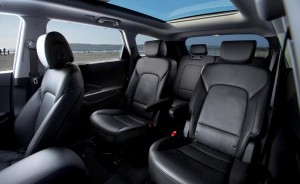 Possible cross-shops include the Honda CR-V and Toyota RAV4 and Ford Escape – but none of them offer a third row seating option. The Ford, however, does offer a turbocharged engine option (as in the Sante Fe Sport) and it’s significantly more fuel efficient (33 on the highway vs. the turbo’d Sante Fe Sport’s 27 MPG). 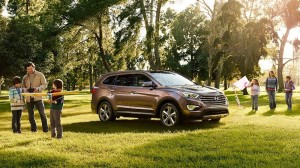 The Sante Fe was redesigned last year, replacing the Veracruz – which Hyundai no longer sells. Rather than have two separate models – one smaller, one larger – Hyundai now has one model that’s available in smaller – and larger – sizes. 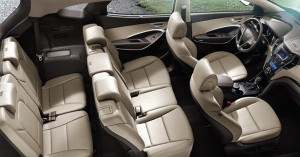 Also, both versions of the 2014 Sante Fe have had their EPA fuel economy numbers notched down slightly for the new model year. 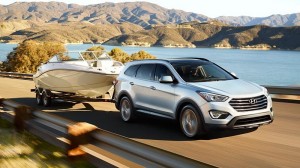 Peppy – or practical. And both at the same time.

Can tow up to 5,000 lbs. (V-6 models) completely outclassing the four-cylinder-only competition. 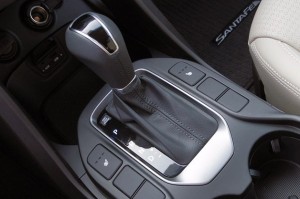 Base engine in Sante Fe Sport is more powerful than competitor engines, but thirstier.

All Sante Fes are automatic-only, including turbo 2.0 Sport model.

Excellent turbo 2.0 engine is not available in the larger/three-row Sante Fe. 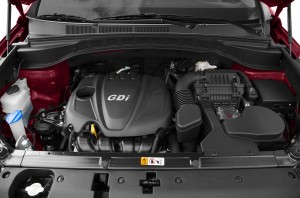 Many automakers are paring down their engine lineups. For example, the Toyota RAV4 no longer offers anything but a small four (it used to offer an optional V-6).

The Honda CR-V is also four-cylinder-only.

It’s also more than you get in the base trim Ford Escape, which comes standard with a 168 hp 2.5 liter engine. 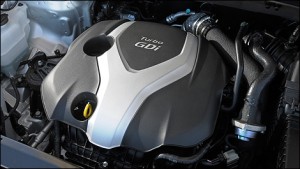 You can get a comparably powerful V-6 in something like the Chevy Equinox – which is available with a 301 hp, 3.6 liter V-6. But the Equinox – which is larger than the regular wheelbase Sport Sante Fe but not quite as large as the long-wheelbase Sante Fe – does not offer seven passenger seating. To get that, you’ve got to up-size to something even larger, such as a Chevy Traverse (or  a Mazda CX-9).

Interestingly, the EPA fuel economy numbers for the 2014 are slightly less than they were last year – despite no major changes to the vehicle or the drivetrains. 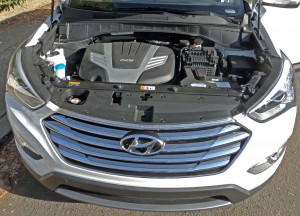 On the upside, the base-engined Sante Fe Sport is quicker than most of its competition, getting to 60 (FWD) versions in just over 9 seconds.

What compares even more favorably, though, is the Sante Fe’s optional (in regular wheelbase versions) 2.0 turbo engine. Despite the 74 hp uptick, gas mileage with this engine is almost the same: 19 city, 27 highway (also slightly “de-tuned” for 2014; the same-engined 2013 Sante Fe carried an EPA rating of 20 city and 27 highway). With the optional AWD system, the numbers are 18 city, 24 highway (vs. 19 city, 24 highway last year).

The turbo’d Sante Fe can scoot to 60 in about 7.9 seconds (FWD; AWD versions take a tenth or two longer), which smokes the CRV and RAV4. Ditto the four-cylinder-powered Equinox, which – like the other two – takes well over 9 seconds to get to 60. 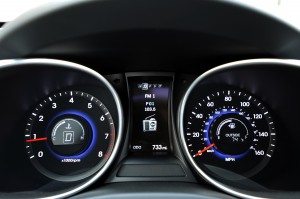 Only one same-sized competitor runs quicker and gets better gas mileage – the 2.0 turbo’d “Ecoboost” version of the Ford Escape. It can hustle to 60 in the mid-high sixxes and manages 22 city, 30 highway (FWD versions).

But, you can’t have that great performance (and gas mileage) and seven seats, too. Because like all the others in this class, there’s no third row, chico.

Unfortunately, the rumor – encouraged by Hyundai at the time of the Sante Fe’s launch last year – that the punchy (and not too hungry) turbo 2.0 engine would be offered as an option in the three-row GLS/Limited has not panned out.  The bigger Sante Fe comes standard – and is only available with – a 3.3 liter, 290 hp V-6.

All Sante Fes, regardless of engine, come with a six-speed automatic as the standard (and only available) transmission. 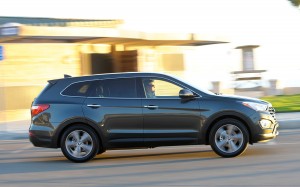 I test-drove a Sport model with the 2.0 turbo engine – which is (slight tuning differences aside) the same excellent engine found in other current Hyundais like the Sonata (and its corporate cousin, the Kia Optima) where it makes an advertised 274 hp vs. 264 in the SF.

Blessed be the turbo.

The only thing  in this class that’s competitive in terms of power/acceleration is the also-turbo’d Escape (270 lbs.-ft of torque) but, again, just the one wheelbase – and no third row. 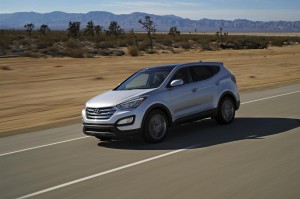 The only area where I’d say Hyundai hit a triple instead of a home-run is transmission-wise. There is nothing objectionable about the standard six-speed automatic that comes with every SF engine. It shifts smartly and quietly, working well with the turbo engine’s strong bottom end torque and its high-RPM horsepower. It doesn’t shift too soon – or too late. I hardly used the driver-selectable manual gear change mode because why bother? The transmission didn’t need any help from me. It knew exactly when to drop down a gear – and when to hold a gear. I never felt the need to over-ride its decisions.

However . . . it’s still an automatic. And no matter how perfectly timed it shifts, how quiet it is – or how fuel efficient – it is not as much fun as working a clutch and stirring gears yourself. If you prefer a manual, you’ve got two possible alternative choices: The VW Tiguan and the just-redesigned Subaru Forester. The Tiguan’s appealing because it comes standard with a 2.0 turbo engine (200 hp) and a six-speed manual. The Soobie is less powerful (170 hp) but also comes with a six-speed manual as standard equipment. 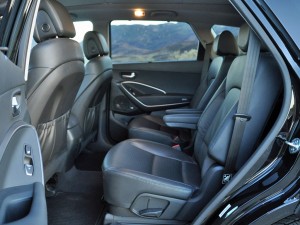 But – once again – neither the Tiggy nor the Soobie offer more than two rows of seats.

And its handling is inevitably less agile.

The seven-passenger SF isn’t quite as big as three-row/seven passenger competitors like the Chevy Traverse, Mazda CX-9 and Ford Flex. It is 193.1 inches long overall and rides on a 110.2 inch wheelbase – vs. over 200 inches long for these others, all of which also have several inches more wheelbase (118.9 for the Traverse, 117.9 for the Flex, 113.2 for the CX-9). 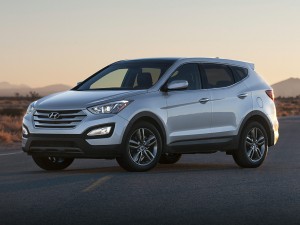 But – and here’s a surprise – it turns out the physically smaller on the outside Sante Fe GLS actually has more second row legroom (41.3 inches) than the much larger Traverse (36.8 inches) and the CX-9 (39.8) and its cargo capacity (80 cubes) is only slightly less than the Ford Flex ‘s (83 cubes).

Now, the Flex has really generous second row legroom (44.3 inches) and the Traverse and CX-9 much more cargo room (116.3 cubes and 100.7 cubes, respectively) but the SF splits the difference pretty nicely and may be just roomy enough – without being too big – for your needs and wants. 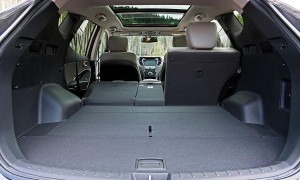 And for those who don’t need that third row, there’s the regular wheelbase SF. The second row’s a little tighter (39.4 inches) and there’s a bit less cargo capacity (71.5 cubes) but these stats still stack up well when compared with the stats of other two-row-only, compact CUVs. In fact, the two-row SF has considerably more second row spreadin’ out space than its most direct rival, the Ford Escape – which has just 36.8 inches of second row legroom. That’s 2.6 inches of difference – which is a noticeable difference. The SF also outclasses the CR-V (38.3 inches) and the RAV4 (37.2 inches) and absolutely mauls the VW Tiguan – which has a crumple-you-up 35.8 inches of second row legroom. That’s 3.6 inches of difference – a huge difference. Ditto the cargo capacity count: The tiny Tiggy has only 56.1 cubes of cargo space.

Of course, utilitarian considerations aren’t most people’s only consideration. Style – and features – matter, too.

On style, I’m reminded of the refrain from that little ditty that plays during the opening credits of the HBO TV series, Weeds:

And they all look just the same… 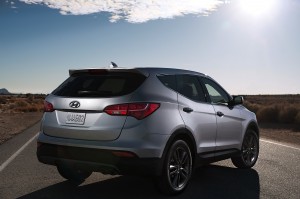 Which, they pretty much do. It is getting really hard to tell one brand’s CUV from another brand’s CUV. None are disfigured. They’re just . . . derivative. I’d be willing to bet that  the up-canted rear quarter glass from a new RAV4 would fit a new Escape, which would fit a CR-V . . .  which would fit the new SF.

Ok, that’s a bit of an exaggeration – but not by much. A coalescing sameness is spreading across the land. You have to squint hard to discern aesthetic differences – and identify one brand vs. another brand from say 50 yards away. Thank the motor gods for those helpful badges they glue to the tailgate. . . .

Overall, the meme is more sportwagony than SUV-ish, if that makes any sense. The SF and its rivals are less box-on-box-like, with swept-back rooflines and rising rear haunches, a visual trick to make them look like they’re about to pounce. (Motorheads did the same thing back in the ’70s with a set of Gabriel Hi-Jacker air shocks.) 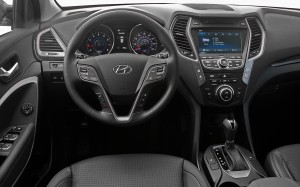 I have no objection – other than the distorted (and limited) view to the rear – a consequence of the “fast” roofline and truncated (and also steeply slanted) back glass. The SF has this issue.

They all have this issue.

Inside, it’s modern and slick-looking (as is the case with Escape and the others, too). But there are some individualized coolnesses, such as the AC vents built into the B pillars and the expansive (optional) panorama glass roof. I also like the side bolsters on either side of the center console – with a semi-hidden storage cubby in between. 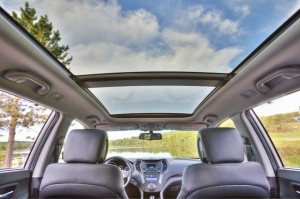 Also, you can replace the second row bench with a set of captain’s chairs in the Limited. A heated steering wheel is available, too  – and on all trims, including the base Sport.

Usually, you’re forced to buy a more expensive higher trim to get features like that.

The only thing I didn’t like about it is more a matter of wishing it offered the one thing it doesn’t – a manual transmission to go with the spicy 2.0 turbo engine. I know, I know. Hyundai – like most everyone else – is moving away from manuals because most buyers prefer automatics – and also because automatics are now so efficient, they confer a gas mileage advantage relative to a manual, which is a big deal in this era of ever-upticking federal fuel economy mandates. 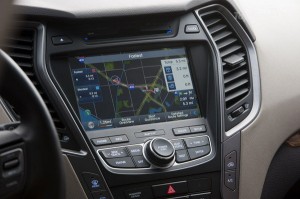 Still, it would be nice to find a clutch down there. The SF is not a CR-V or a RAV. That is, it’s more than merely an appliance. It wants to have fun.

But it would be more fun with a six-speed stick.

The one other bitch I’ve got is the fairly dramatic price uptick. It now costs almost $5k to go from the two-row to the three row. Last year, it was only about a $3,500 jump. This is hard to justify on newness grounds as the Sante Fe was “all-new” last year – and the 2014 is basically a carryover.

It’s either inflation, an unfavorable exchange rate  . . . or, Hyundai feels confident enough about the Sante Fe to price it closer to par with the competition – in some cases, more than par.

We’ll see how it works out. 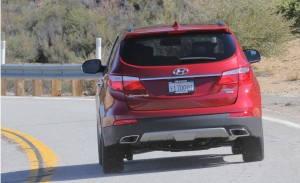 The price increase aside, Hyundai’s still the only player in this segment that offers you a choice of wheelbases – and three engines – in the same vehicle.