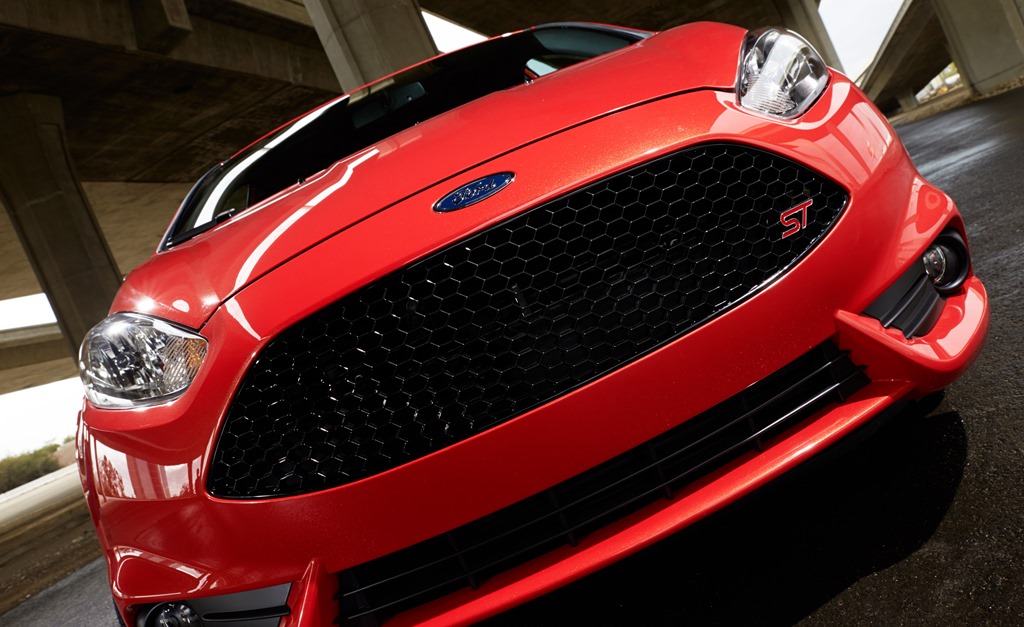 What made the original, classic-era muscle cars what they were wasn’t high-horsepower … as such. 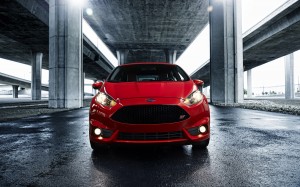 Oh sure, it was a huge factor. But the decisive factor was the accessibility – the affordability – of those horses.

The first (1964) Pontiac GTO – grand-daddy of the breed – was a fairly cheap car. In fact, it was a $295 option you could add to turn an ordinary Tempest into a GTO.

And that was a new twist.

Powerhouse cars had been built previously – the letter series Chryslers and Oldsmobile Rockets, among them. But the 1964 Tempest GTO was the first affordable one such. A car that guys in their late teens and early 20s could buy … as opposed to their dads.

The muscle car era was born. 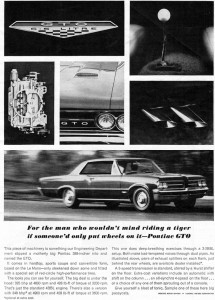 They are more like the letter series Chryslers of the late ’50s than the muscle cars of the mid-late 1960s.

Arguably, the modern inheritor of the spirit of the original-era muscle cars is a car like this Ford Fiesta ST.

It’s a small economy car fitted with a a big horsepower engine that you can buy for not too much. 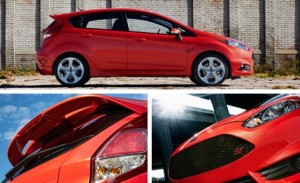 The Fiesta ST is a hot rodded version of the Ford Fiesta subcompact. It comes standard with a 197 hp turbocharged engine and six-speed manual transmission only.

Capable of scuttling to 60 in the high sixxes, it is actually just as speedy as a ’64 GTO – and speedier still than any other subcompact currently on the market.

Right now, there isn’t another sedan/hatchback sedan on the market that can match its moves for the money.

There’s a new RS version of the Chevy Sonic, but it’s an appearance/handling package only. No special high-powered engine.

A Fiat 500 Abarth is a possible cross-shop. But the 500 is a two-door and though it has about the same backseat legroom, getting into and out of those seats is more challenging. It’s also significantly more expensive, with a base price of $24,595.

The Honda Civic Si is available as a sedan or a coupe – but it’s a step up in size (compact rather than subcompact) and price ($22,900 to start for the sedan). 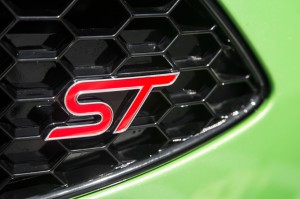 The ST package is new – and unique.

Ford is currently the only automaker offering a serious high-performance subcompact for less than $22k to start.

Burns corners as well as barks the tires.

More space inside than you’d expect – for people and cargo.

Excellent gas mileage – 35 on the highway – if you can keep your foot out of it.

Mouse interface that controls audio/GPS is not the user-friendliest thing. 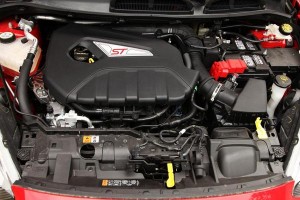 The ST Fiesta doesn’t have a big V-8, but it does have a much bigger horsepower engine than other Fiestas. Than any other car in this class.

What you get is a much-tweaked (and heavily turbocharged) 1.6 liter four – same displacement as the base Fiesta’s engine, but with about 40 percent more power, courtesy of 21 pounds of boost on demand. 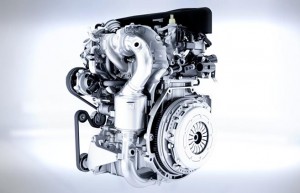 Instead of 0-60 in the mid-high nines (with the standard engine) you’ll enjoy mid-high sixes to 60. And that is seriously speedy for a car that costs not much more than a run-of-the-mill econo-car. (And about $2,500 less than a Fiat 500 Abarth.)

The ST also manages to rate almost exactly the same gas mileage as the base 1.6 liter Fiesta: 26 city and 35 highway vs. 28 city, 36 highway. You lose an unnoticeable 2 MPG on the bottom (and 1 on the top ) in exchange for getting to 60 about 3 seconds sooner.

And that, you’ll notice!

The ST’s turbo four is paired with a six-speed manual transmission – period. There is no optionally available transmission. The final drive ratio is a very hairy 3.82 (my ’76 Trans-Am has a 3.90 rearset) but this hard-launching ratio is made civil at highway speeds courtesy of the deep overdrive sixth gear.

Surprisingly, the engine will accept regular unleaded. High-dollar premium is recommended – but not required. 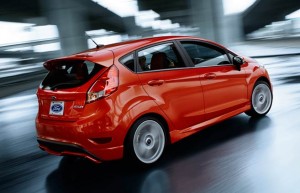 The Fiesta ST passes the muscle car test. You may remember. Place a $20 on the dash and tell your front seat passenger if he can grab it, it’s his.

Then dump the clutch and floor the gas.

Your passenger will be pinned to his seatback by the G forces, unable to filch the $20.

That’s how you told a GTO 389 Tri-Power from an ordinary Tempest 326. And it’s how you tell a Fiesta ST from the standard Fiesta.

In the curves, too.

Because the ST is not all engine. It is also suspension – and rolling stock. Faster steering telegraphs to 17 inch wheels (two sizes up from what comes on the base Fiesta) wrapped with extremely aggressive low profile (205/40/17)Bridgestone Potenza “summer” tires, the works cinched down low and tight. The resultant ride is on the rigid side, but latter-day GTO seekers will not object to this. Indeed, they will smile at Ford’s brazen refusal to compromise the car. That goes doubleplusgood for the mandatory six-speed manual transmission. The GTO’s fiercest engines (the legendaryRam Air IV) were also never made more mass market-friendly by offering them with an automatic. 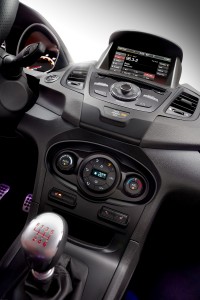 An interesting thing about these modern turbo performance cars is they do not behave like turbo performance cars traditionally behaved. The power band is not a power spot – with dead spots on either side. No matter the RPM, the engine pulls. Just harder as the RPMs climb. There is torque enough to leave the six-speed in sixth from about 35 MPH up, if you’re simply looking to maintain  steady forward progress. If you want more than that, drop down a gear. The point to take home is that it’s not a peaky engine that needs a lot of management. Like the old muscle car V-8s, there’s easy power everywhere. This makes the car pleasant to drive when you’re just driving. But when you feel like driving, a bit more pedal dials up the full  almost-200 hp which – in this 2,720 pound package – makes for very GTO-like shits and giggles.

One other thing: Vis-a-vis the Fiat 500 Abarth – which sounds as though it has straight pipes and no cats – the ST is surprisingly quiet. There’s a bit of a braaaaap when you get on it, but the rest of the time, it’s far less obstreperous than the 500.

The Fiesta shares the Mini-me Aston Martin styling that Ford has been using – to good effect – across its product line. The DB7-ish nose tapers forward as if to vacuum up the road ahead. STs also get a body kit, rear airfoil and foglights on the outside and aluminum pedals and door sills plates on the inside – plus special ST badging and a fatty leather-wrapped steering wheel. All of which is credible rather than silly visual posturing, all-too-common among cars with not much more than the proverbial loosely wound rubber band under their hoods. 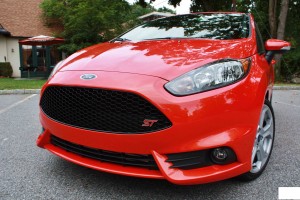 Size-wise, the little Ford falls in between the Chevy Sonic – which is about a foot longer overall – and the Fiat 500, which is more than a foot shorter overall. The Chevy has a more spacious interior – including back seats with 34.6 inches of legroom vs. 31.2 for the Fiesta. This of course is in keeping with the Sonic’s primary mission – which is to be a transportation appliance.

On the other hand, the Fiesta is very competitive, cabin room-wise, with its only real performance car competition – the Fiat 500 Abarth. Both have virtually the same back seat legroom (at 31.7 inches, the Fiat actually has slightly more legroom in its second row than the Fiesta). However, the Ford has four doors while the Fiat has just the two. Among other things, this means that the driver and front seat passenger have to get out before passengers can get into the back seats. The 500’s front seats must also be slid forward and folded in order to access the back seats after their occupants have exited. The Ford’s back seats are slightly tight for people over six feet tall, but they are – ironically – much more practical. Ford was wise to go with the hatchback sedan layout rather than the two-door coupe layout. (A three-door hatchback is available in export markets – and may make its way here, too.)

The ST package – in addition to all the performance enhancements – also gets you a 6.5 inch touchscreen display in the center stack, automatic climate control, keyless/pushbutton ignition, leather trim, seat heaters and an upgraded Sony HD audio rig with satellite radio. 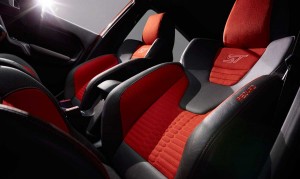 My only beef with the car has to do with my own beef. I’m not a fatty, but at 6 ft 3 and about 200 pounds, the Recaro track-day buckets took some squeezing to get into and they, in turn, squeezed me. Short-term sterility is a likely side effect. This is one area where the ST is a very different car than the GTO – which had a three-across, low-backed bench seat (since outlawed for “safety”). The downside to that arrangement, of course, is that you’d slide across the slick Morrokide (what Pontiac called their fake vinyl) right into the passenger seat – not the hot ticket during hot laps.

I think if I lost 10 pounds, the ST would fit fine. Your mileage may vary. 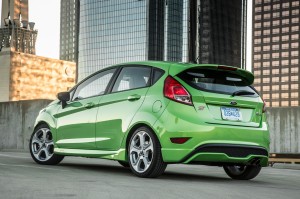 Another thing the ST has in common with its GTO godfather is that because it’s so affordable, you’ll be able to afford modifications. In the good ol’ days, that meant things like headers and mag wheels. Today, it might mean an adjustable wastegate for the turbo, so you can dial up more than 21 pounds of boost. Or maybe an intercooler. There are lots of possibilities – and because you didn’t have to spend every last cent on the car (or insurance, or gas) it’s more financially feasible to actually buy those items than dream about them.

The fact is that guys buying cars like the new Camaro or Mustang GT are almost all older guys. Because – for the most part – it’s guys over 30 (over 40) who can afford a car that costs more than $30k to buy, probably $2k a year to insure – and without doubt about $70 to fill-up. 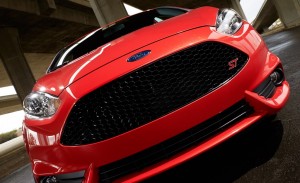 Bless Ford for showing the way. For re-inventing the muscle car concept – and thereby, giving it a new lease on life. With any luck, the others will imitate. Exactly as happened when the ’64 GTO turned the automotive world upside down.