Sexual assault is a crime… except when it’s done by an armed government worker (that is, a law enforcer).

How else to describe the horror visited on a South Dakota man named Dirk Sparks?

He was suspected of having ingested a “drug” arbitrarily decreed to be illegal by the same government that just as arbitrarily decrees other “drugs” to be legal – and when he declined to assist in his own incrimination by providing evidence that could and would be used against him in a court of law, was forcibly restrained, had his underwear pulled down, his penis exposed and handled – and catheterized – by armed government workers, who then extracted the urine sample they needed as evidence of his guilt.

He was later charged with two counts of “felony drug ingestion,” according to news reports.

What happened to Sparks is not an isolated atrocity performed by sadistic hillbilly cops. Under proliferating “no refusal” laws, if you decline to assist the government in establishing your guilt under DUI/DWI laws, the state has empowered itself to literally force the evidence (if any) out of your very body.

The federal government – through the National Highway Traffic Safety (run, when you hear that word) Administration – has been using “grants” (i.e., your tax dollars) to “encourage” (that’s their word, not mine) these “no refusal” checkpoints at which blood and other such bodily samples may be forcibly extracted from the victim. 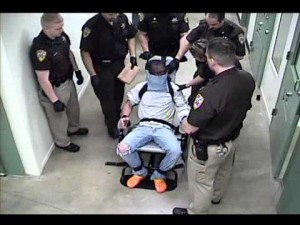 A gauze of “legality” is provided by rubber-stamp search warrants issued on the spot (or via phone) by a compliant official. These are like the always-approved federal warrants delivered (in secret) by the FISA courts against alleged “terrorist” suspects. Basically, if the government wants to read your e-mails and obtain other such info, it’s going to get the go-ahead from the FISA kangaroo courts. Just the same, if a Hero at a DUI checkpoint is unhappy about your refusal to do roadside yoga or blow into a Breathalyzer machine, he can call Judge Rubber Stamp and then proceed to drop your drawers or jab a needle in your arm.

It’s going to get worse, too.

No arbitrarily illegal “drugs” were found. 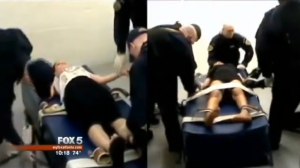 A Florida woman, Leila Tarantino, was similarly stopped by another armed government worker over a minor victimless affront to a statute – a “rolling” stop – and subjected to a sexual assault by the armed government worker, who shoved her hand inside Tarantino’s underwear, inserts her fingers into Tarantino’s vagina and forcibly removed the tampon (but no “drugs”) that was inside her.

Again, these are not “isolated” exceptions; they are policy.

Dozens of states have passed laws or have laws already on the books that permit this sort of thing, legally. The courts have affirmed the legality of such things. It is claimed we have given our “implied consent” to such things by dint of having acquired the driver’s license we are effectively forced to have in order to travel.

This “implied consent” business also provides the legal pretext for subjecting us to being stopped at random, without the once-upon-a-time legally mandatory probable cause, without which (in better times) armed government workers were obliged to leave us alone.

All of this is done to us under duress – pressure/threats used to coerce us to “agree.” It is interesting to observe that in civil law, if it can be established that a party to a contract agreed to the contract under duress, the contract is non-binding, illegitimate. But as with sexual assault, a different standard applies when dealing with the state and its enforcers. 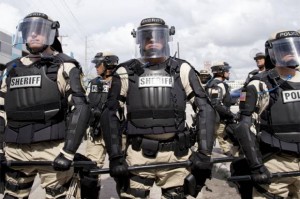 Again, this is a pattern, not some anomaly that can be safely dismissed as an aberration. One standard (and set of obligations) for us, another for anyone wearing a government-issued outfit.

He will not be charged with murder – just as the Heroes who committed sexual assault in the Sparks, Eckert and Tarantino cases will not be charged with sexual assault, of which they are all clearly guilty, if words have any objective meaning. Neither will the laws that authorize this abuse be rescinded as the outrages upon decency and affronts to the clearly delineated (ex) protections enumerated in the Bill of Rights that they obviously are.

Like an alcoholic and abusive spouse, there is a tendency to rationalize and even soft-peddle what America is becoming.

It does not change what America is becoming.