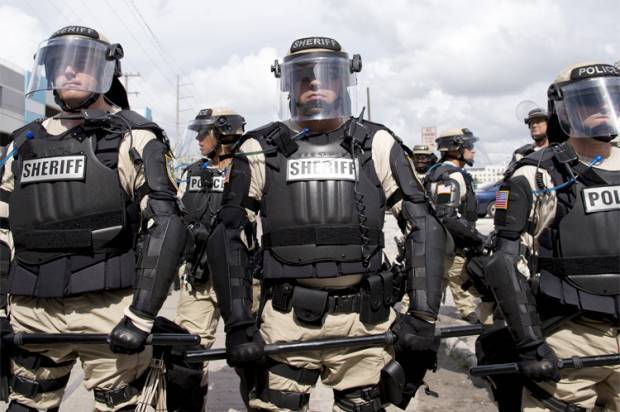 First, the Reader Letter – with portions italicized and my response to the thing in its entirety below:

While you make some valid points, they only apply 100% in Utopia 🙂

Also, you take 2-3-X examples of bad/stupid cops and you generalize, I don’t know what you call that, but it’s not an argument. The US is a continent with north of 300 million people and tens of thousands of cops.

Not all cops are bad, authoritarians assholes etc. Not all people shot by cops are (black) angels etc.

All I ask from you is to be a little more calm and reserved until you know what happened there. I am not talking in generalities, but about 2 specific cases (see the hysteria about Zimmerman, “hands up don’t shoot” crap, another hoax inciting racial hatred/civil disobedience because it’s an electoral year).

Because, you know, what happened next? Cops being assassinated and big bro having an additional pretext to take over, right?

That’s martial law, governments thrive upon chaos. And if you play their game, just like BLM activists, you’re no better dude. BTW, I am a big fan of your website and I live in Eastern Europe-Romania.

But cops are “authoritarian assholes” – it’s what they do that defines them. Not whether they perceive themselves as being “nice guys” who “give people breaks.”

And what do they do? They enforce the laws. Many – arguably, most – of these laws being statutory “offenses” of one kind or another that criminalize actions (or non-actions) that involve no harm to others. They are merely “violations” of “the law.”

For example: There is a stop sign at the “T” intersection a mile down the road from my place. Approaching the intersection/stop sign to make a right or left turn (onto the “cross” of the “T”) one can literally see clearly in either direction for an eighth of a mile or more. If there is no traffic, there is no need (insofar as being a safe/considerate driver) to come to a complete stop. So I don’t. But this is “illegal” – and if a cop sees me (as here) he will threaten me with physical violence and proceed to steal money from me on behalf of the state. If am not “buckled up for safety,” he will steal more of my money. If he says he “smells marijuana,” he can and probably will place me in irons (handcuffs) and take (“seize”) my vehicle as piratical booty.

“Asshole authoritarian” enough for you?

In my opinion, anyone who voluntarily (and for money) chooses to coerce or harm people who’ve done nothing to harm other people – who’ve merely “offended” a statute, with the state as “victim” – is, indeed, an “authoritarian asshole,” by definition.

We are now routinely subjected to unreasonable searches, compelled to provide evidence to be used against us, presumed guilty until we prove ourselves innocent. Our property may be taken from us without even the formality of a criminal charge being leveled against us. If we attempt to defend ourselves in any way, it constitutes “resisting” and amounts to legal pretext for beating us up or even killing us. If an “officer” claims he “feared for his safety,” we can expect to be summarily executed (see here, for example).

Just a few examples. There are many, many more.

Who is doing the enforcing of all this? Pointing guns at us? Barking orders at us?

It’s a hard thing to come to grips with – like a bad marriage.

But it’s the reality.

I am no “leftist,” not a BLM supporter (all lives matter). And I ardently support peacekeeping. Dealing with the small handful of people in society who breach the peace by hurting other people, either by physically harming them or by harming their property. I mean people who commit physical assaults (beating someone up, rape/sexual assault, murder) and deliberate/malicious harm to property (e.g., arson, etc.)

If cops were legally restricted  to dealing with such things only  – with the small handful of people who harm other people – and left the rest of us alone – I’d be defending them even more ardently than I currently criticize them.

But then they’d be peacekeepers, not law enforcers.

It’s time to shed the fantasy that these law enforcers “serve and protect.” If they do, it is entirely incidental.

There was an excellent piece in (of all places) The Huffington Post the other day (see here) that suggested an alternative to cops – law enforcers – swarming society on the lookout for “violations.” Instead, like firemen, maybe they should wait until they’re needed – until a crime has been committed.

Not “might be.” Not because “the law” has been violated.

An actual crime – defined as an actual harm caused to an actual flesh-and-blood victim. Not “the state of Virginia” or similar nonsense.

Then – and only then – do they make an appearance.

But that would mean living in a free society rather than a police state.