One of the best little Toyotas isn’t.

It’s the Yaris iA. Which was badged as a Scion last year. But it’s not that anymore, either.

Toyota will sell you one, though. 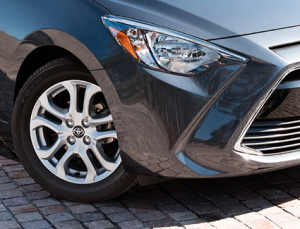 The iA is a car in search of a home.

Toyota bought Mazda2s to rebadge and sell as iAs through its youth-brand small car line, Scion. This kind of thing is common because it saves the cost of developing a new car from the wheels up and in this case, it gave Scion something Mazda dealers didn’t have.

But then the Scion brand went away; something had to be done with all those cars.

So, they got rebranded for the third time – this time as Toyotas.

Not if you like a perky, extremely fuel-efficient, space-efficient, features-laden (standard 7-inch LCD screen with apps, push-button ignition, collision-avoidance system) and very affordable small sedan that – for whatever reason – Mazda has decided not to sell here under its own label.

Base price is $15,950 for an iA with a six-speed manual transmission.

With the optional six-speed automatic – which features rev-matching downshifts – the price tag is $17,050. 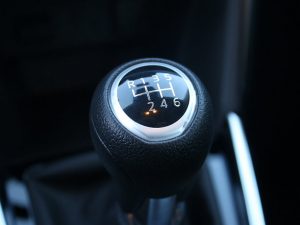 The primary cross-shop is Ford’s Fiesta, which costs less to start ($13,960) and is available in both sedan and five-door hatchback versions. Its chief deficits relative to the MazdaYota are a much tighter back seat (31.2 inches of legroom vs. 34.4 inches in the iA) and fewer standard amenities.

You might also want to consider the iA as an alternative to Corolla – which costs about $2k more to start and isn’t as fun to drive, in part because it’s only available with an automatic transmission and in part because it’s a Toyota – and hasn’t got the Mazda’s sporty reflexes.

Finally – and confusingly – there is the other Yaris. The hatchback coupe/five-door. Which is a totally different (Toyota-built) car. It’s smaller overall by about a foot and a bit less (but not much less) roomy inside. It’s priced very similarly – $15,250 to start – but it’s not nearly as nice a car, in terms of standard features and amenities. Probably the only reason it’s still in the lineup is because it gives Toyota a two-door hatch and a five-door hatch in this price range, for those who like the iA but don’t like four doors (or a trunk vs. a cargo hatch). 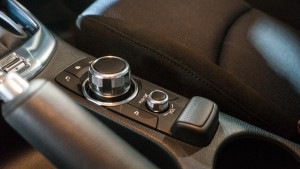 Mazda-designed LCD interface looks slick but isn’t the easiest to use.

The 50 MPG-capable Sky-D diesel engine that was on deck has been put on permanent hold. 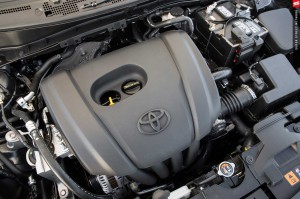 It takes the Toyota-incarnated Mazda about 8.9 seconds to get to 60 with the six-speed manual vs. about 9.5 for the Ford.

And to get the turbo engine and dual-clutch transmission, you have to buy the higher SE trim, which brings the price up to $15,885 – erasing the Ford’s initial price advantage.

Interestingly, the iA’s gas mileage is still nearly as good as the turbo-Ecoboosted Ford’s: 32 city and 40 highway (with the automatic; 30 city, 39  highway for the manual) vs. 31 city, 43 for the Ecoboosted Ford. 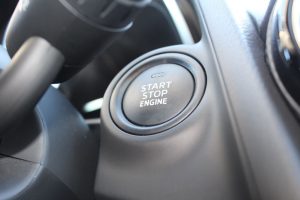 Mazda relies on very high compression ratios (12.0:1 in this case) to literally squeeze more power out of every drop of fuel. Turbochargers also increase cylinder pressure, but they do so only part-time and are primarily designed to make power on-demand.

High compression engines always make the most of the incoming air/fuel charge, but the trick (historically) has been avoiding engine knock – and doing that without having to feed the engine high-octane premium fuel. 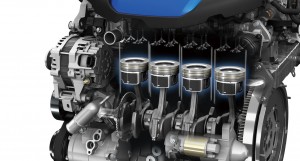 Toyota does not tout this, but the engine’s the same regardless of the name.

Worth a mention also is the IA’s optional six-speed automatic, which – unlike the Ford’s – is conventional (hydraulic, with a torque converter) rather than an automated or dual-clutch automatic.

Why is this worth mentioning? 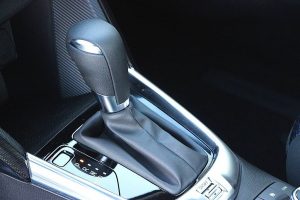 The Ford’s dual-clutch/automated manual box will cost you maybe more than the car itself is worth if it ever craps out on you, post warranty. And the nature of the thing – it’s an extremely complex piece of technology – makes it more prone to crapping out and more expensive to service regardless. Ford uses these transmissions chiefly because they are extremely efficient but note (again) that the Fiesta’s mileage isn’t appreciably better than the ToyoMazda’s.

Mazda excels at building fun-to-drive small cars (and fun-to-drive bigger cars, too). A car’s personality isn’t affected by where you buy the car – or the badge on the trunk lid. A Toyota Camry re-sold as a Mazda6 (no, they’re not actually doing that . . .) would not feel like a Mazda. 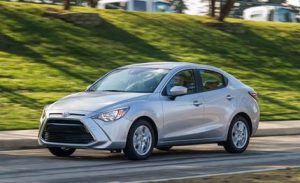 And the iA does not feel like a Toyota despite being sold at Toyota stores.

So, what’s that mean, exactly?

Toyotas – the ones built by Toyota, not just badged by Toyota –  excel at being dependable long-term companions. Cars that take you from A to B without muss or fuss for 200,000-plus miles miles and are usually still worth more than the tankful of gas you just put in the thing. Long-haul reliability and blue chip value. These are the main reasons people buy Toyotas  – and so that’s what Toyota focuses on.

Mazda, on the other hand, focuses primarily on the driving vivacity of its cars. How they make you feel when you’re behind the wheel – when the wheel is cranked hard left and your right foot is hard on the gas coming out of your favorite back road curve. 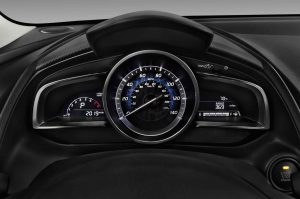 An engine that seems happy when you’re running it hard.

A manual transmission to match.

You will find all these things in the iA – because, after all, it is a Mazda.

Those reading this who may be dubious about the iA’s small-sounding 106 hp should bear in mind the Mazda Miata’s not very muscular, either – but it’s still one of the most fun to drive cars in the world – if you’re someone who likes to drive. Both the Miata and the Mazda2  – uhm, the iA –  are cars that respond when you make advances. When you ask, they answer. Enthusiastically. 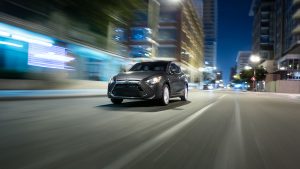 They are not cars for people who enjoy sitting on the sofa watching Price is Right reruns.

That’s what the Corollla – and the other Yaris – are for.

Peak power isn’t made until 6,000 RPM, so don’t be afraid to rev the thing. The sounds it makes when you do will let you know it’s ok – that it’s at home in the upper reaches of the tach. Eighty-ish is this car’s sweet spot, with the tach running around 4,000 RPM. Which just happens to be exactly the torque peak (103 ft.-lbs.) of the 1.5 liter engine.

The little Mazda-in-mufti likes to cut a rug, too.

Notwithstanding its fairly long wheelbase (101.2 inches vs. 98 for the Fiesta) the iA’s turning circle is more than two feet less than the Ford’s (32.2 feet vs. 34.4 feet). The iA also comes standard with 16 inch alloy wheels (vs. the Ford’s 15 inch steel wheels) and weighs less, too. 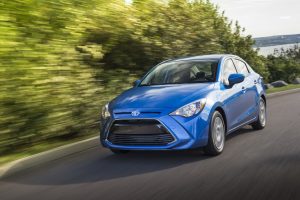 The result is an eager little rabbit puncher that is both economical to drive and exceptionally fun to drive, too.

Even with the optional automatic, by the way.

Which comes with a driver-selectable Sport mode, manual gear change control and throttle-blipping, rev-matching downshifts, too.

The other Yaris comes with a four-speed automatic. No rev-matching.  And its standard manual has only five speeds. The Corolla is automatic (CVT) only. 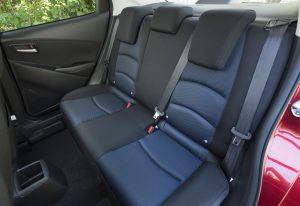 Another thing Mazda does well – and so now Toyota – does, too, is space efficiency.

The iA is small, foot-print-wise – but it’s not cramped. The car has 34.4 inches of backseat legroom vs. 31.2 inches in the Fiesta. It also has al most 14 cubic-foot trunk, large for the size of the car. 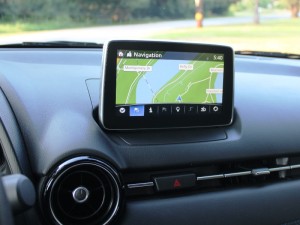 It also comes standard with everything.

Or at least, more things than you’d expect to find in a car in this price range – including a 7-inch LCD monitor, pushbutton/keyless ignition (with remote engine start), a back-up camera and a collision-avoidance system with automatic braking.

These are high-end features in a just-over-$15k-car. 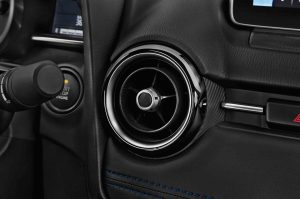 No extra charge for any of it.

The cabin is much nicer than the other Yaris’s too. It’s finished, Mazda-style, with handsome real chrome/polished metal accents and carbon fiber trim panels; the AC vents are ball-type and so you can direct airflow almost anywhere. 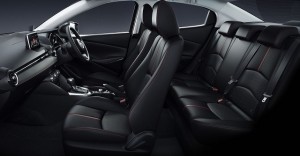 There is only one option – other than the automatic transmission: A GPS upgrade for the LCD infotainment system.

The “Multi-Function Commander Control” input – which consists of a knob that you rotate/push and secondary buttons mounted on the center console – looks sharp but isn’t as functionally well-conceived as the rest of the car. Things that should only require one action – changing radio stations, for example – require multiple actions. To change stations, you first have to select the audio function, at which point a bar of options appears on the LCD screen. Next, use the mouse to scroll right to reach the << or >> to go up or down.

There ought to be just one knob for this.

Don’t blame Toyota, though. Blame Mazda. It’s their system. The same one you’ll find in other new Mazdas, incidentally.

The good news is certain often-used functions (such as volume control) can be controlled by secondary controls mounted on the steering wheel.

These steering wheel controls are also standard, by the way. 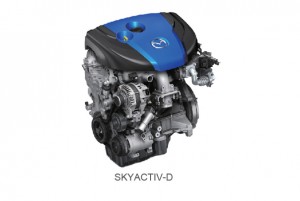 It sucks that Mazda’s line of Sky-D diesel engines are not (unlike Eddie Murphy) coming to America . . .either in Mazdas or Mazdas rebadged as Toyotas.

These engines – which are available in Japanese/European market Mazdas – are capable of 50-plus MPG, almost as good as a Prius hybrid, without the hybrid downsides of high up-front costs, weight and multiple powertrains (combustion engine, electric motor, battery pack).

Mazda – and other car companies that have diesels ready-to-go – are not ready to go here because of our EPA’s  almost-impossible-to-comply-with diesel exhaust emissions regs. See what happened to VW. Mazda – and the others – don’t want that to happen to them.

Hence we get no diesels, in Mazdas. Or ToyoMazdas.

Speaking of which: Since Mazda no longer sells a subcompact sedan under its own label, the only way to get one is to buy this one. And here’s an interesting thought for you:

The iA as an alternative to the Mazda3 – which is the smallest car Mazda sells under its own label. 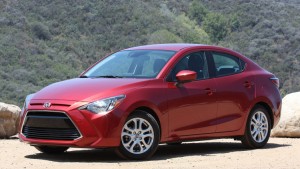 The Mazda3 is bigger outside – but only slightly more on the inside. It has about an inch more legroom for the backseaters and less than half an inch more such room up front.

It actually has less cargo room (12.4 cubic feet) behind its back seats (it’s a hatchback rather than a sedan) and though it has more engine (155 hp) it also carries more curb weight  (2,930 lbs.) and so it’s only marginally quicker – and its fuel economy, though good (28 city, 36 highway) isn’t quite as good as the Mazda2’s (oops, the iA’s).

The badge has changed, but the goodness remains the same.