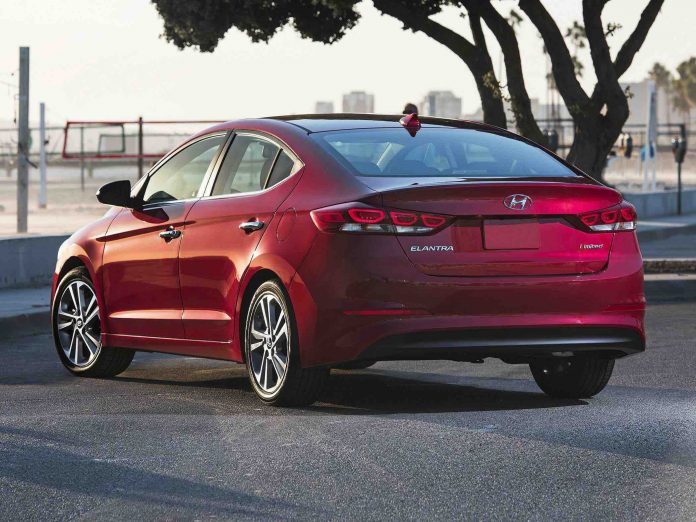 Something worth knowing about today’s “compact” sedans is that some of them have more room inside than some mid-sized sedans do.

Another thing worth knowing is that some of these “entry level” compact sedans offer more in the way of choices – particularly under the hood – than more expensive cars.

And most of the same amenities, too.

Just for a lot less money.

Which is why you ought to know something about the Hyundai Elantra in particular. 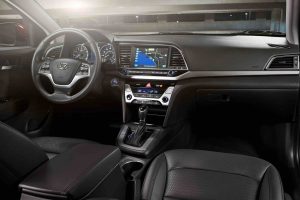 The Elantra is Hyundai’s second smallest, second least expensive sedan. It slots in between the subcompact Accent and the mid-sized Sonata sedans.

You’d expect the Elantra to be both larger and roomier than the subcompact Accent – and it is. What’s unexpected is that the Elantra – though smaller overall than the Sonata – has slightly more room inside: 35.7 inches of backseat legroom vs. 35.6 in its bigger-brother. It’s only a tenth of an inch’s difference – but the point is the much-smaller-footprinted (and much less expensive) Elantra has a just-as-roomy backseat as the Sonata.

It also presents you with three engines to pick from – and three different transmissions, too. 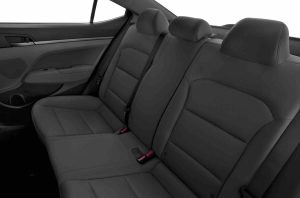 Most of its same-sized rivals (except its Kia-badged cousin, the Forte) offer offer two of each.

They cost more, too.

Well, except for the Forte!

The Elantra’s fiercest rival is its Kia-badged sibling, the Forte sedan – which stickers for $16,800 to start ($150 less than the Elantra SE) and has slightly more backseat legroom (35.9 inches).

Both siblings come standard with the same class-best warranty coverage, including ten years/100,000 miles on what’s under their respective hoods. 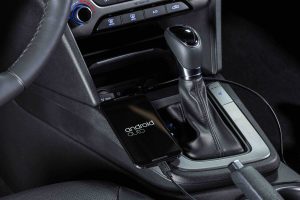 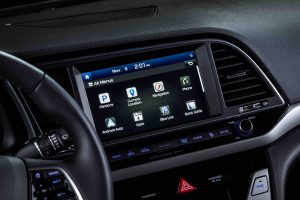 Costs less than same-size rivals, offers amenities they don’t  – and comes standard with a much better warranty.

Three different engines – including 40 MPG-capable (on average) Eco engine and 201 hp high-performance engine available with either a manual or automated manual transmission.

Honda Civic Si is manual only. 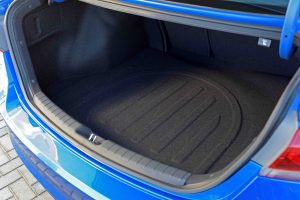 Kia-badged sibling is an even better deal – roomier – and costs even less.

GM made a mistake when it stopped making Pontiacs (and Oldsmobiles) that were mechanically different from Chevys – but continued selling  “Pontiacs” and “Oldsmobiles” that cost more than Chevys. 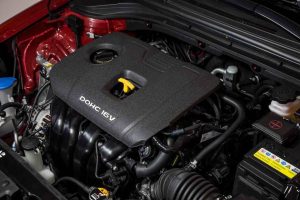 The Hyundai-Kia combine  has not made the same mistake here.

While the Elantra and its Kia-badged sibling are similar they are not the same – visually or mechanically.

Both come standard with same 2.0 liter, 147 hp four cylinder engine – available with the same six-speed manual transmission or six-speed automatic transmission – but the Hyundai’s next-up/optional engine is an economy-focused 1.4 liter turbocharged engine that makes less power (128 hp) but ups the MPGs from the base four’s 26 city, 36 highway to 32 city, 40 highway – which it is capable of exceeding.

The Forte’s next-up engine is a stronger (164 hp) version of the 2.0 liter four that isn’t available in the Elantra. 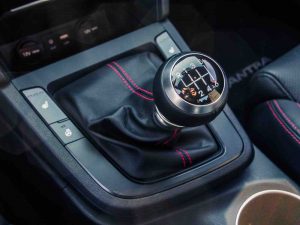 The Elantra’s 1.4 liter “Eco” engine is also available with either a six-speed manual or an optional seven-speed automated manual transmission – the automated manual delivering the best mileage as well as the best performance.

What gives the Eco-powered Elantra the boost?

Or rather, the turbo does. It boosts the torque output of the 1.4 liter engine to 156 ft.-lbs vs. 132 ft.lbs for the 2.0 liter engine – and the Eco’s swell of torque is on tap at 1,400 RPM vs. 4,500 RPM for the 2.0 liter engine. It’s the almost-immediate torque (no revving – or at least, less) which accounts for the Eco’s superior performance while the mileage advantage is a function of the engine being smaller when not boosted. 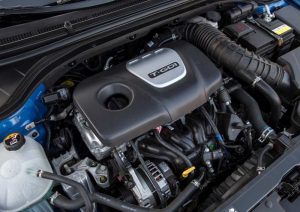 Note how much higher the 1.4 liter’s city mileage numbers are vs. those of the 2.0 liter engine. The reason is that in stop-and-go traffic, the smaller engine is a  . . . smaller engine. It gets “bigger” – in terms of airflow (and power) when the boost comes on, but that doesn’t happen when the engine isn’t revving – as when you aren’t moving.

Or not moving much.

On the highway, the Eco vs. 2.0’s mileage advantage narrows – because the the littler engine needs to be made effectively bigger via boost to keep up with the 2.0 engine.

But even though the mileage spread isn’t as much once you’re rolling – the Eco gets rolling a lot more quickly. Zero to 60 in 7.8 seconds vs. 8.5 for the 2.0-equipped Elantra. 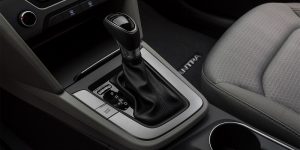 The Elantra Sport comes with a 1.6 liter turbocharged four that makes 201 hp – which you can play with either via a standard six-speed manual or a performance-calibrated version of the seven-speed automated manual.

This drivetrain knocks the Elantra’s 0-60 time down to 6.2 seconds – which just for the record is quicker than most V8 muscle cars of the ‘80s.

The Elantra Sport does. 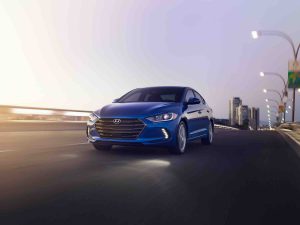 The Elantra’s character changes pretty dramatically depending on which drivetrain combo you select. The standard-issue four is what you’d expect in a modern economy car. There isn’t an abundance of power but there is enough power.

This engine does its best work – and is more fun – with the six-speed manual transmission because you can get it revving higher – where it makes its power- sooner.

On paper, you’ll lose about 2 MPGs  by going with the manual vs. the optional six-speed automatic but in the real world, the manual-equipped version may do better – if you know how to row.

The automatic does better – on paper – because it can be programmed to score highest on the EPA’s test loop, by shifting in such a way as to exactly coincide with what’s optimal for maximizing MPGs.

But in the real world, its mileage may be less – because a deftly shifted manual can outperform an automatic. The problem with manuals isn’t inefficiency; it’s that their  efficiency depends almost entirely on the efficiency of the human operating the clutch and the shift lever.

You might be surprised at the mileage you can get out of the manual.

The Eco-engined Elantra is a slightly different story. 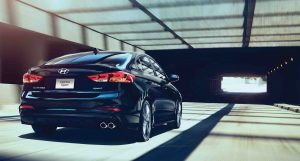 It does better with the automatic – but this time it’s because the seven-speed automatic used with this engine is an automated manual. It’s even more efficient than a shift-it-yourself manual because it combines the inherent efficiency potential of a manual with the spot-on shift programming of an automatic. It also has that extra gear, which gives it a leverage advantage.

The turbo helps, too.

All that torque is a leverage advantage. The Eco pulls with almost as much authority as the 1.6 Sport’s engine at part throttle, in the lower and mid-ranges – with the main difference being the 1.6 has a deeper well of torque to dip into.

There is another difference – and this is a difference vs. every other new car I have test-driven over the past 25 years, with one exception. That exception being VW’s now-verboten TDI diesel engines. 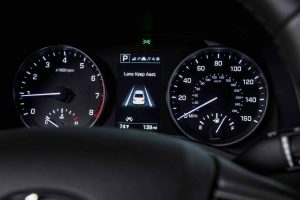 And the difference is this:

The Eco-engined Elantra delivered better-than-advertised mileage. During the week I had it, I averaged 39.8 MPG. This is nothing short of spectacular. EPA says the Eco Elantra ought to manage 40 . . . on the highway.

I averaged almost 40 – all the time. City and highway. And driving not slow, which I don’t do as a matter of religious necessity.

I used Sport mode – which makes the transmission upshift later and more firmly, to maximize the acceleration potential of the package – and passed many slow-moving Clovers, pedal to the floor. Ran it up to 70-plus more than a few times. Even so, the Eco almost refused to run empty. At week’s end, there was still about a quarter tank left. 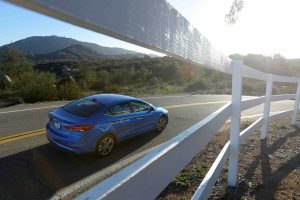 If you drive more reasonably, you should be able to do better than I did.

And that is outstanding.

The Sport’s 1.6 liter turbo engine is almost exactly as strong as the Honda Civic Si’s 1.5 liter  turbocharged engine, which makes 205 hp. But the Civic Si’s engine is only available with a manual transmission; there’s no automatic option. And the manual-only Civic Si’s base price ($24,300) is $2,500 higher than the base price of the 2.0-equipped Elantra Sport.

Put that toward gas, insurance – or back in your pocket. 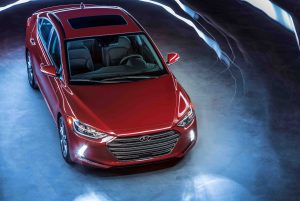 One of those things car journalists aren’t supposed to spill beans about is the fact that “compact” sedans sometimes make more sense than more expensive mid-sized ones.

And without costing you anything – even though they cost less.

For instance, it used to be the case that you had to go with a mid-sized car if you needed family car room. Especially backseat room – and also trunk room.

The Sonata does boast significantly more front seat legroom – 45.5 inches vs. 42.2 in the Elantra – but that’s more than all but the very tall will need so it’s a mostly theoretical advantage, while the Elantra’s almost one foot-less length is an everyday advantage as far as finding a place to park and not taking up as much space in your garage.

Plus the price difference.

Elantra rivals like the Mazda 3 and Honda Civic sedan are also very space (and size) efficient, the Honda especially. It has 37.4 inches of backseat legroom (almost two full inches more than the Hyundai) but the price difference here is significant enough to call that one a draw.

As mentioned earlier, the Elantra’s most threatening rival is its brother-from-the-same-mother, the Kia Forte sedan. It is slightly more space efficient: 179.5 inches long, so about half an inch shorter than the Hyundai – but with slightly more back seat legroom (35.9 inches) a slightly larger trunk (14.9 cubic feet) and a lower sticker price.

The one thing it hasn’t got is the Elantra’ available 1.4 liter Eco engine – and that amounts to a lot. 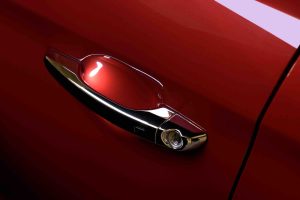 The base SE trim and the Eco trim both come with 15-inch wheels, which is something you don’t see much anymore.

Which is too bad.

Fifteen-inch wheels have less rolling resistance (which helps save gas) than the larger diameter wheels that most new cars now come with – chiefly for visual reasons.

Fifteen inch tires should be less expensive, too – when it comes time to buy new ones. 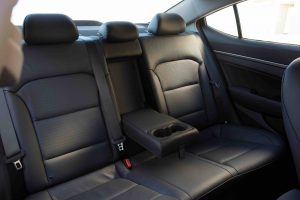 If you buy the Eco, Limited or Sport trim you’ll get approach lights built into the door handles – a small thing but a nice thing when it’s dark outside and an unusual thing to find offered in an “entry level” car.

So also the sun visor extenders that also come standard in these trims. And the rear seat center console-mounted cupholders, too.

This “entry level” car can also be ordered with adaptive cruise control, an eight-inch touchscreen, eight-speaker HD stereo with Clari-Fi music restoration technology, an enhanced 3.5 inch TTF main gauge cluster, climate control, heated front and rear seats and a hands-free power trunk opener, too. Several of these items are not to be found in same-sized/similarly priced rivals. 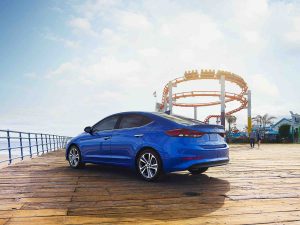 All trims comes standard with the Hyundai-Kia ten year/100,000 mile powertrain coverage – best in the business.

You may have read that sedan sales are sputtering – and it’s true. With a few exceptions. Hyundai isn’t having any trouble selling this sedan.

And now you know why.