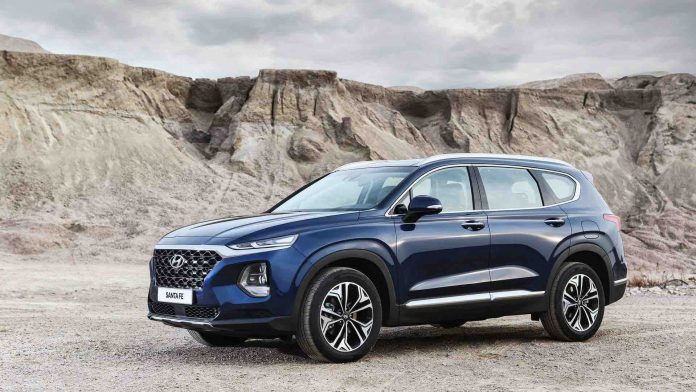 It’s also available with three different engines – and all of them can be paired with AWD, not just the more expensive ones. 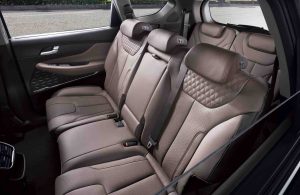 Technically, there are two different Sante Fes as well. But since Hyundai calls them both by the same name, I’ll review both at the same time.

The Sante Fe is Hyundai’s compact and medium-sized crossover SUV.

The regular SF comes with two rows of seats and room for five. Your pick of turbo’d – or not turbo’d four cylinder engines; with – or – without AWD. Yes, indeed – you can get the much more powerful turbo’d engine without AWD.

It’s often case that the weaker/standard engine is offered only with FWD  – and if you want the more powerful engine, you have to buy AWD, too.

Hyundai lets you pick what you prefer – mix and match. 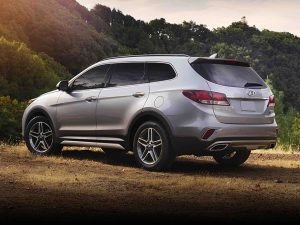 Or, you can buy the three row Sante Fe XL – and get a powerful V6.

Also with – or without AWD.

In between is the regular SF with a 2.0 liter turbo, with – or without – AWD.

There’s a name change, for openers.

Last year’s two-row SF was the SF Sport– while the three-row version was just Sante Fe (no XL).

This year, the two-row SF is just the SF – and the three-row becomes the SF XL. 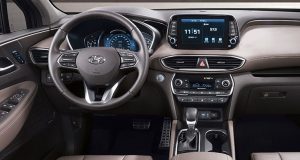 This has to do with the two-row SF receiving a number of upgrades, including a new eight-speed automatic transmission (standard with both of its available engines), revised suspension tuning, exterior/interior styling tweaks and some new – and standard – tech features, including Lane Keep Assist and Smart cruise control with Stop and Go.

The three-row SF XL gets discounted a bit because it’s pretty much the same as it was last year. 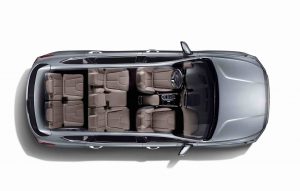 No upselling you an engine (or trim) to get AWD – in either version of the SF.

Regular SF comes standard with everything but autopilot.

The regular SF has a lot of driver “assists”  . . . and they’re all standard. 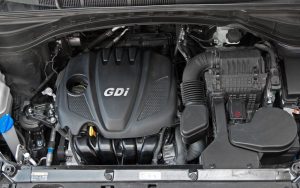 Standard equipment in the five passenger SF is a 2.4 liter, 185 hp four paired with FWD and an eight-speed automatic; the new transmission features  tighter gear spacing and much deeper overdrive gearing than last year’s six-speed transmission.

You have the option to add AWD – without having to upgrade to the optional 2.0 liter turbocharged engine, which makes 235 hp this year.

That’s down 5 hp from last year’s 240 hp rating, but it’s still among the most powerful available engines in the segment and the new eight-speed’s tighter gear spacing makes up for it anyhow. 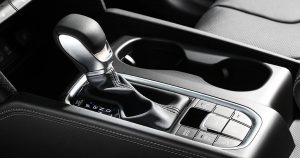 The three-row XL comes standard with a 290 hp 3.3 liter V6 paired with a six-speed automatic and – again – your choice of FWD (standard) or AWD (optional). 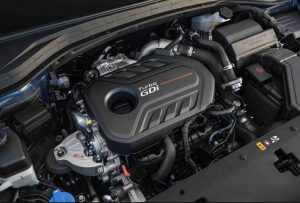 Bad news, the diesel engine which had been dangled as a prospective option has been tabled.

Which is a shame, because the diesel would have given the Sante Fe even more pulling power – and much better mileage.

Uncle seems opposed to this – allegedly because of the higher emissions of diesel engines. In fact, because diesel engines are a dagger pointed at the soft spots of the EV Agenda, which seeks to replace all forms of internal combustion with external combustion (at power generation plants) for the sake of tightening the noose around the public’s collective neck.

Short-range/long-recharge EVs being much more amenable to control by Uncle.

There is a saying – horses for courses. It means picking the type that best suits the need. A Clydesdale is great for pulling a Budweiser wagon; not so great for running the Kentucky Derby. 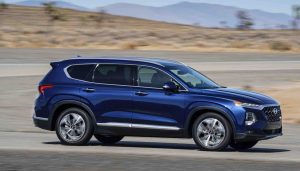 The smaller SF is the right horse for your course if you don’t need to haul a crew of passengers.

Its more compact dimensions – 187.8 inches long overall vs. 193.1 for the SF XL – make it more agreeable as a commuter that also suits for picking up the kids on the way home from work.

It’s easier to park – and has a tighter turning circle, so less backing up and straightening out before you’re pointed in the right direction.

The new eight-speed transmission also cuts the revs down to hardly running when the SF is running 70 or so. Two overdrives now instead of just the one previously – with the top one (eighth) being a .635 ratio that’s within spitting distance of half the once-typical 1:1 gearing in pre-overdriven transmissions. 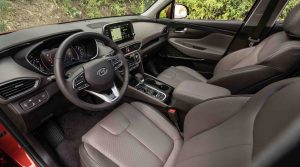 And the gas it would suck would give a big block ’69 Chevelle SS 396 a run for its money.

Fuel economy uber alles wasn’t such as monster concern – for the car companies – when the current SF XL was designed back in 2013.

It is a monster concern now – because of unhinged federal fuel economy fatwas (CAFE, or Corporate Average Fuel Economy) that threaten to jump from the highs 20s to the low 50s – and just a model year or three from now, too  . . . unless the Orange Man can put the kibosh on it. 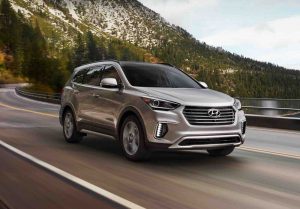 This is why the two-row SF (just tweaked-up) has the eight-speed tranny (and .635 OD gearing) and why the 2020 SF XL – or whatever Hyundai ends up calling it – will have something in the same ballpark  . . . and probably not the V6.

So – for now – the XL feels a bit busier at the same highway speeds vs. the two-row SF.

It also doesn’t feel as strong in the lower and mid-ranges of the RPM band – despite the 3.3 liter V6 being almost twice the physical displacement of the SF two-row’s optional 2.0 engine. 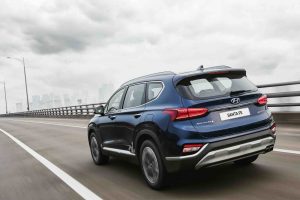 Put another way, you have to floor the V6 to get the power; it’s there – but you have to reach for it. The SF two-row’s power – the torque that gets you rolling – is right there almost from the moment you turn the engine on. The turbo 2.0 will get going as quickly as the V6 with hald pedal vs. full.

But, if you need to pick up the kids’ friends, the XL is the right horse for that course.

It’s only slightly longer, so not a beast to deal with – as some 7-passenger crossovers are. And there is something good to be said for simpler engines without turbos and transmissions with fewer gears and parts – both of which tend to last longer, give less trouble and cost less to fix if something goes awry. 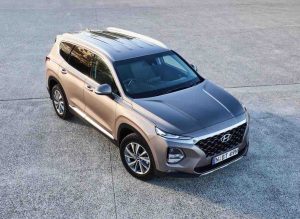 Hyundai has tweaked the looks of the two-row SF, with a new (larger) grill and new (smaller but brighter) cat’s-eye LED headlights – kind of similar to the look Jeep gave the Cherokee a few years back.

Like the Cherokee, the look is more conventional from the sides and rear.

Inside, the tablet-style display for the GPS/audio and infotainment system has been canted toward the driver to reduce glare and improve visibility. The main gauge cluster and dash have also been revised. 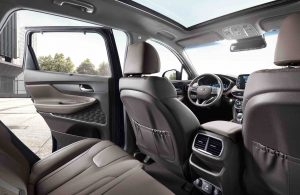 Surprisingly, the two-row SF has more first row legroom than the XL – and not by a little bit: 44.1 inches vs 41.3 inches.

This has been achieved in part by modifying the two-row’s interior panels; more elbow room has also been craved out by moving the mounting point for the window switches and grab handles forward. 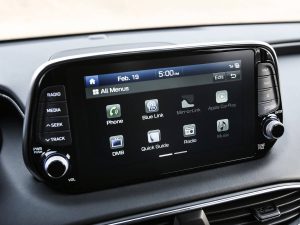 That’s not much more space than in some compact sedans.

Be aware, though, that the XF’s third row is basically a kids’ row. Adults will sit bunched up, unhappy. Third rows in crossovers the XL’s side – which is mid-sized rather than full-sized – are necessarily compromised. If you need adult-friendly third row seating, you’ll want to shop for something larger. 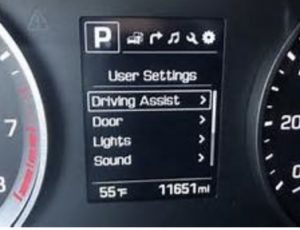 It also means lots of “assists” – the car being peremptory, countermanding/correcting – which I personally don’t dig but you may. These “assists” are sneak-peaks at the Automated Driving Future – which I dread – but which people seem to want.

The fact that this stuff is being made standard (like ASS – Automated Stop/Start) rather than offered optionally is indicative of top-down pressure, on the principle of you-know-what rolling down the hill.

The government is pushing Automated Cars very hard; the industry seems to want them, too – though the why is hard to understand, since one Automated Car is pretty much the same as any other, except for size and color. If this automated car thing ever comes into being, it will likely mean an unprecedented thinning of the herd. No need for 25 or 30 different brands of Crest. 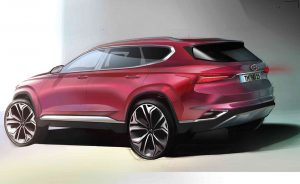 The current XL will be replaced for 2020 with a new – and eight-passenger crossover that may not even be called Sante Fe (XL or otherwise) and will probably also come with all of the “assists” that are now standard with the updated two-row SF. 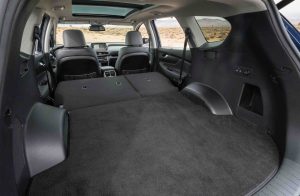 The upside is you should be able to negotiate a very good deal on a new 2019, especially as the year rolls along.

Regardless of year – or rows – Hyundai still offers unsurpassed warranty coverage – including 10 years/100,000 miles on the engine, transmission and major drivetrain parts.

This remains a major sell for Hyundai – and Kia – vehicles.  The coverage last longer than most people keep their cars these days – and longer than it takes to pay them off, too.

Whether you need room for five – or seven – the Sante Fe’s got you covered  . . . under the same label.