Our original Clover – the eponymous Clover – has been outstripped and outdone by our newest Clover – “Alex” – also known as “LH” and “Winnie” among other self-applied sobriquets.

I marvel at his doggedness. This Clover – banned for his miasma of incoherence, personal attacks and general impenetrability – continues to submit posts (126 and counting) despite all of them going automatically into the trash. Paraphrasing Bob Dooooooooole: He knows it; I know it – the readers of EPautos know it!

But he keeps on lying about my record – as Bob used to say – and for that reason I occasionally let one slide by, for the sake of intellectual dissection. Have a look at this loaf:

In reply to eric.

It’s almost over. This imbroglio that you have created is going to take this ship down. Slowly at first, and then real fast. Your minions seem to be jumping ship one at a time now Eagle Eric. They now see that you’re really not a Libertarian. Especially if you are willing to sell out your Libertarian principles for a just few extra shekels in your pocket. Yep, your voting choice seems to ‘clearly’ go against your nonaggression principle by associating with a person who seems to have never heard of this principle. Along with the principle of due process and numerous other principles. Oh well. 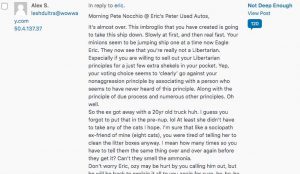 So the ex got away with a 20yr old truck huh. I guess you forgot to put that in the pre-nup. lol At least she didn’t have to take any of the cats I hope. I’m sure that like a sociopath ex-friend of mine (eight cats), you were tired of telling her to clean the litter boxes anyway. I mean how many times so you have to tell them the same thing over and over again before they get it? Can’t they smell the ammonia.
Don’t worry Eric, ozy may be hurt by you calling him out, but he will be back to explain it all to you again for sure. he-he-he Yeah, everyone now feels like they could be on the chopping block now too. Like I said and tried to warn everyone about before, there are certain faux pas that will not be tolerated by Herr General. Now they are finally getting it. But I don’t think that they care so much about how Herr General ‘feels’ anymore, because he doesn’t feel much. If you would have only bought a few boxes of Girl Scout cookies with the money that you saved by not buying health insurance. And yeah, everyone understands that if you do have an unexpected event, that someone is going to have to pay for that. Like by not taking the responsibility to buy your own health insurance, that you put everyone else at risk too. Not much different than an illegal going to the hospital with a serious injury, or just dropping his wife or daughter off to have the baby.
I see that “Burnouts and Beatdowns” is still getting a number of hits. I guess you can thank me for part of that, but I believe that it was your input that keeps bringing them to it. Or maybe it’s a school of psychiatry that has been telling it’s students to try and figure out which mental deficiency you have, or how many. lol
There’s more that I can add to this for sure. But like you should have done early this morning, I’m going to take a break now. Yep, continuing to stroke your…. cat by the pond would have been a much wiser decision for today.

Alex reporting from Siberia. It’s -71 today and I hope to get a few things done outside. There’s an unexploded practice missile stuck in the ice out front that I have been meaning to remove since 2018. We have been waiting for a thaw that hasn’t come yet. Maybe next year huh.

And they ask my why I drink!

To Shift For Oneself?

The Pressure to Diaper, Dissipated

You Have the Right to Show Me Your ID