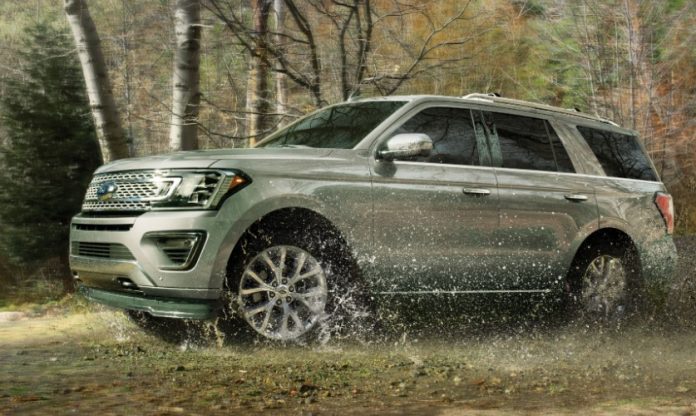 What’s a big SUV without a big engine? If it’s a Ford Expedition, it’s the strongest big SUV in its class – with the smallest standard engine.

It’s also the biggest, period – at least, without changing names.

The Expedition comes in two sizes. Full-sized and fuller-sized.

Both of them skinned in Reynold’s Wrap. 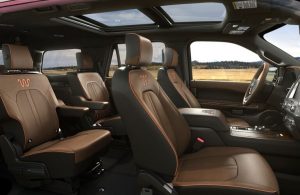 The Expedition is a large SUV that’s based on the popular Ford F150 pickup. It comes standard with the same twin-turbo 3.5 liter V6 that’s optional in the F-150, in strong (375 horsepower) and even stronger (400 horsepower) versions – both versions stronger than the big V8 that’s standard in its main rival, the Chevy Tahoe.

Both versions of the Expedition have three rows of seats and eight passenger capacity but the fuller-sized MAX version, which is similar to the Chevy Suburban – which is a fuller-sized Tahoe with a different name – is about a foot longer overall and has significantly more cargo capacity behind its third row. 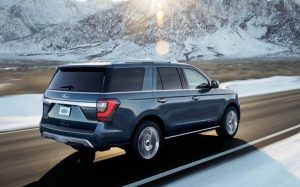 Prices start at $521810 for the standard-length XLT trim with rear-wheel drive. Limited, King Ranch and Platinum trims are available – with either rear-drive or four-wheel-drive with low-range gearing and driver-adjustable terrain settings.

The biggest change for 2020 is the addition of the King Ranch trim – formerly an F-150 trim. It dresses up the Expedition similarly, with soft-touch Del Rio leather seats, stitching and badges as well as an adaptive suspension and 22-inch wheel/tire package. 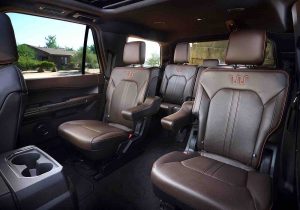 This – plus inflation – likely accounts for the slight price uptick from last year – when you could buy an otherwise-the-same XLT for $52,130 to start.

All trims come standard with the strongest engine in the class.

Pulls more than Tahoe – and Suburban.

Driver “assists” aren’t optional. You may not want ’em but you have to pay more for them.

The 400 horsepower version of the turbo’d V6 is only available in the highest-cost Platinum trim.

Aluminum skin (like the F-150’s) is light but more easily damaged and more expensive to repair than steel. 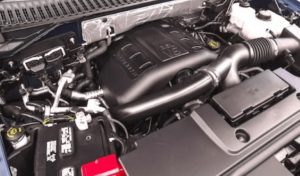 The Expedition has an option, too. Platinum trims come standard with a 400 horsepower version of the 3.5 liter V6. 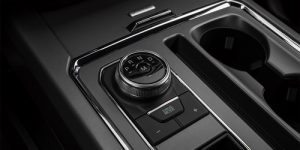 Something else to consider – as a possibility – is that the 375 hp version of the Expedition’s V6 might be DIY upgradable to the 400 hp version  – without buying the Platinum trim. It’s basically the same engine – unlike the Tahoe’s optional 6.2 liter V8, which is a different (physically larger) engine.

The difference between the 375 and 400 hp versions of the Expedition’s V6 might be a matter of adjustment – a bit more boost, for instance. Something you could do without swapping engines.

Or buying an optional one. 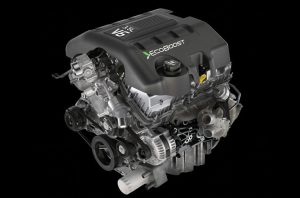 Eighth, ninth and tenth gear are all overdrive gears. Tent is a deep 0.63 ratio – which cuts engine revs to barely running unless you’re really hauling. With a light right foot, the V6 can keep the Expedition trundling along at 70 at about 1,800 RPM – which accounts for the slight MPG edge the Expedition has over the less powerful Tahoe.

Something else the Expedition has is range. 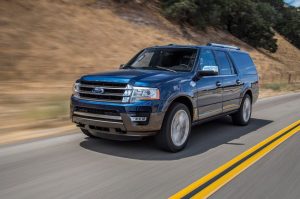 On a full (24 gallon) tank, the standard-size 2WD Expedition can go almost 500 miles before it needs to stop for fuel – which is nearly as far as a Prius hybrid – and a lot farther than any electric car.

Plus, you can get going again in about five minutes – for another 500 miles – a feat no electric a car (or truck) can match or even come close to matching.

Also of note: Both versions of the Expedition’s mighty V6 are regular (87 octane) engines – amazing given the boost. And it raises an interesting question. How much more boost could these engines handle if fed 91 octane or better gas?

It may not have a V8, but it feels – and sounds – like it does. In addition to the big-engined power, there is also – somehow – that big-engined sound. A bass note that develops into a cape buffalo bellow as the big bus accelerates. 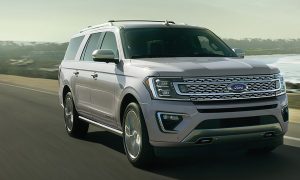 It rides better, too. An amazing – almost magical – achievement given this is still a body-on-frame/real-deal truck-based SUV, not a car-based crossover SUV.

The contrast between this huge SUV – and my little truck (an ’02 Nissan Frontier) was striking. Part of my test loop for trucks and SUVs includes a very rough, very steep (and very narrow) gravel – and mud – backwoods trail with lots of washboards. My truck must tread gingerly – slowly – or the rear axle reverbs like a ’50s doo-wop band only without the pleasantness, because it’s got a solid rear axle and leaf springs (like most muscle cars of the ’60s, by the way).

The Expedition has an independent rear suspension – just like a sport sedan – only with almost ten inches of clearance. Which enables it to barrel up the same craggy road at three times the speed with no reverb  . . . unless you’ve got the excellent audio system playing some of it. 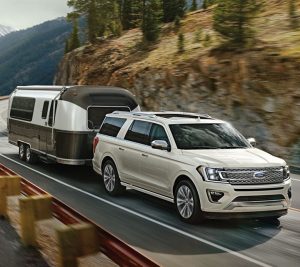 The only thing it doesn’t do better is fit in parking spots – which are sized for cars and car-based crossovers.

But even here, the Ford outmaneuvers its rivals. The MAX version is about three inches shorter bumper-to-bumper than its Suburban equivalent, so you’ve got just a bit more wiggle room – with the same room inside. Both the Ford and the Chevy have nearly identical maximum cargo capacity – 121.5 cubic feet and 121.7 cubic feet, respectively.

Some may not dig the rotary knob control for gear selection – or the push-button selection for ranges, in 4WD-equipped versions. What I didn’t like is that there’s no button to turn off ASS – the engine stop/start system that is being forced down our throats – not by the car companies, but by the government. The car companies foist ASS on us to comply with federal fuel efficiency standards; the idea being that fractional per-vehicle “savings” – achieved via repeatedly shutting off the engine – will up the car company’s Corporate Average Fuel Economy numbers. 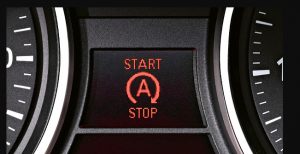 But it costs us annoyance – as well as (probably) shorter battery life.

Anyhow, when ASS first appeared in new cars about five years ago, there was always an obvious button to turn the damnable system off – so your engine wouldn’t. Lately – in the last several 2020 models (various manufacturers, not just Ford) I have tested, it takes more digging – more scrolling – through menus to find the ASS off “button.”

I never did find the Expedition’s. It may not have one.

Same goes for the traction control button. The closest I found was Sport mode, which allows a little rear wheelspin (in 2WD). But if you attempt a burnout, the car’s ECU Oberfuhrer cuts throttle and applies brakes – literally. A screen pops up int he gauge cluster to let you know. 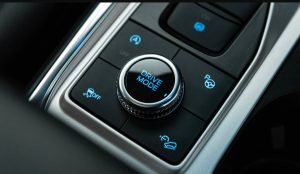 The probably good news is there is likely a quick fix – a defeat – for all these saaaaaaaaaaaaaaaafety (and “efficiency”) “features.” 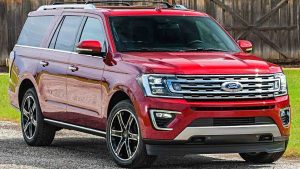 The only radical thing about the Expedition’s skin is its skin – which is made of aluminum rather than steel. Otherwise, it is conventionally handsome, with styling adjustments up to you according to which trim/option package you select – from family-hauler XLT to King Ranch cowboy.

There’s also an FX4 off-road package – similar to the same-named package available with the F-150. It includes 32-inch all-terrain tires, an electronic limited slip rear differential, HD shocks, underbody skid plates and a sand guard for the turbo intercooler – as well as subtle FX4 badges on the quarter panels. It doesn’t look as off-road-stompy as the FX4 F-150, but it’ll tackle the same terrain. 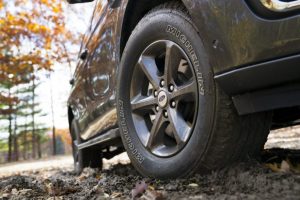 Because it is so big, the Expedition offers adjustment. Limited trims have pedals that can tailored to suit the longer (or shorter) legged. The Platinum trim comes with power folding both rows – second and third.

That third row has a pretty astounding 36.1 inches of legroom, too. That is more legroom than in the second row of many current mid-sized family cars. You really can carry eight people in this kahuna. Not just five plus some torsos.

The center console storage cubby in between the driver and front seat passenger could almost seat one more. Open it and drop your kid in there. He really might fit. Several laptops will, easily. Plus your hoodie and a chicken sandwich from Popeye’s (delicious!). 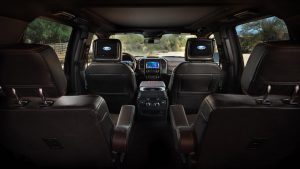 All trims come standard with more ground clearance – 9.7 inches – than others in the class, including the Tahoe (which has 7.9 inches of clearance).

The Platinum is a Lincoln in all but name – and price. It’s still expensive – but not $100k expensive. It includes all the tiered options in the other trims (except for the King Ranch’s unique seats and trim) plus the 400 hp version of the V6, power-folding running boards, leather-wrapped everything, 22 inch wheels, a larger/nicer touchscreen and an adaptive suspension system. 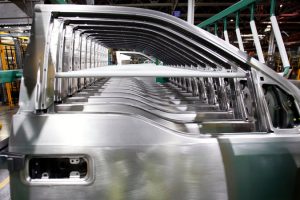 In one way, it’s more than a Lincoln. The Expedition’s tow rating is higher than the Navigator’s – even though the two SUVs are basically the same SUVs sold under different labels and even though the Lincoln’s version of the 3.5 V6 makes 450 horsepower.

There are two potential downsides to the Expedition’s two upsides – its mighty twin-turbo V6 and its lightweight aluminum bodywork. The V6 is a more complex engine than a big V8 and it is a pressurized engine – twice. How will it hold up to that over the next 15 years – vs. a simpler, easier-going V8? 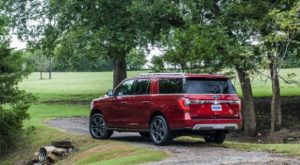 The other potential downside is the aluminum skin. It shaves a lot of weight – which is one reason why the Ford is so fast. But it is easier to bend aluminum and it cost more to fix it. Even if you don’t bend it, the prospect that you might will possibly mean paying more to cover it against potential loss than you’d pay to insure a more conventionally steel-bodied SUV.