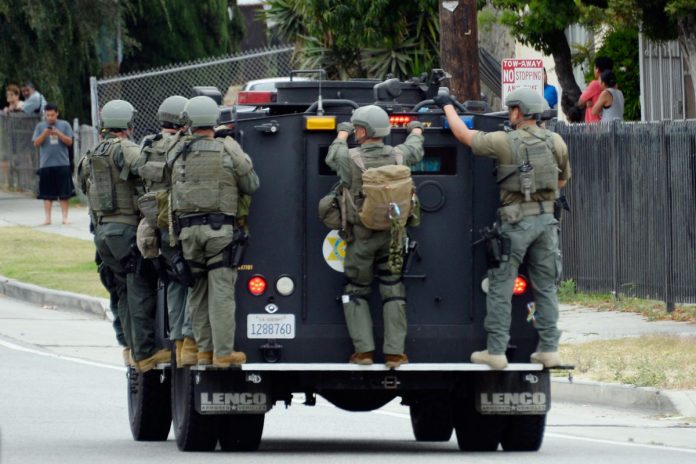 A wedding celebration in NJ was Hut! Hut! Hutted! by armed government workers  – because being human is now a criminal offense. NJ Jersey’s Fuhrer, Phil Murphy, has outlawed social gatherings, even on private property, establishing the principle that the people of New Jersey are the property of New Jersey.

“The Lakewood Police is asking that its citizens be responsible and obey the directives set forth by the State of New Jersey for the safety and health of all. Those that choose not to will be subject to criminal prosecution,.”

No, they’re not “asking” anything. They are ordering, at gunpoint.

They will kill you, ultimately – to keep you safe.

Where did they acquire the right to tell other human beings they may not get together for a wedding or any other reason? To threaten them with murderous violence for such a reason?

The argument, of course, is that people getting together may be a “threat” to the “safety” of others. This criteria having no firm definition and thus neatly serving as the excuse to leave us with less freedom of action than a stray dog in the county animal shelter.

This Corona Cringing has got to stop. Even if tens of thousands of people do die, is it worth killing everything that makes it worth staying alive?

Do you want to live under house arrest, subject to a Hut! Hut! Hutting! if you dare to leave your house? Have your job and business and everything that is your life except for your biological existence  ripped away from you – because you might get sick?

Even if half the country gets sick?

Will it be worth surviving if all you have at the end of it is a forced vaccination and a slice of government cheese?

The Mongoloid From Hidalgo