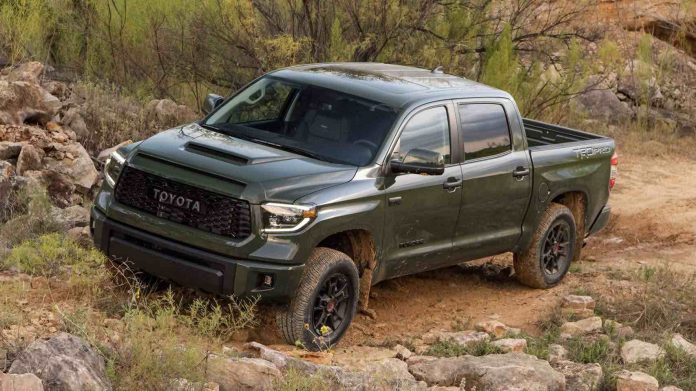 A lot has changed recently – and not just Because Corona. The market for half-ton trucks is changing, too.

And just as dramatically.

For the first time in decades, the number-one best-seller, Ford’s F-150, is threatened by the truck that for decades had been the third-best-seller, the Ram 1500. Which has already supplanted the decades’-long hegemony of the Chevy Silverado as the country’s second-best selling truck. 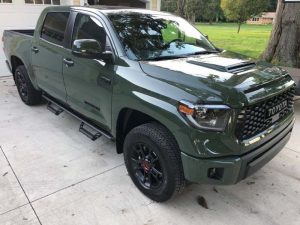 Which brings us to the half-ton truck that may become the next second-best-selling full-size truck – if the hard-charging Ram displaces the F-150 as number one:

Probably because it’s still very much a truck.

It comes standard with a big V8 – 5.7 liters – which doesn’t turn itself off every time the truck comes to a stop. No ASS.</p>

It hasn’t got got a ten-speed automatic, either. Or a turbo. No claxons going off because you got within 50 yards of another vehicle.

It does have a rugged, simple leaf-spring rear suspension and a steel (not easy to wrinkle and expensive to unwrinkle aluminum) body.

The base trim can tow as much as 10,200 lbs. with the standard engine.

The steering wheel doesn’t “assist” you, either. You drive this one.

And you’ll love doing it. 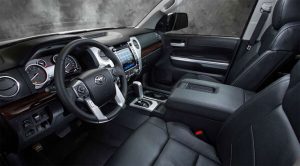 The Tundra is Toyota’s half-ton truck.

It competes with other half-ton pick-ups like the Ford F-150, Chevy Silverado, Ram 1500 and Nissan Titan. Like them, it’s available in various cab/bed combinations and offers a heavy-duty 4WD system with a two-speed transfer case and Low range gearing.

It differs from its Big Three rivals in that it comes standard with a V8 – they’re available but optional in the Ram, Silverado and F-150  – and that V8 isn’t direct-injected or saddled with automated stop/start (ASS), a system that has become common in most new vehicles as a fuel-saving measure but which many people dislike because of the constant stop/start cycling.

If you don’t want that, the Tundra hasn’t got it. 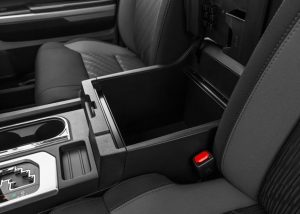 Two additional bed lengths- 6.5 feet and 8.1 feet are available, as is 4WD. You can also get a Crew Max cab – four full size doors and more room for the backseat passengers. However, you can’t get a regular carb (two door) version of the Tundra – something you can still get in an F-150 and Silverado 1500.

But not in a new Ram – which is no longer offered with just two doors. The previously available Ram Classic – which did offer the regular cab bodystyle – isn’t around anymore. 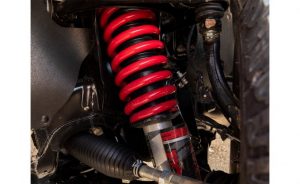 The 5.7 lier V8 that used to be the Tundra’s optional V8 is now standard and you can get the Toyota Racing Development (TRD) PRO off-road package with either cab style. Two new matte-finish colors – cement grey and army green – are now available as well.

The most affordable V8-equipped/double cab half-ton truck on the market.

10,000-plus pounds of towing capacity available with the standard SR trim.

Standard V8 is fuel-injected, not direct-injected. Doesn’t shut itself off at every red light.

Can’t get a regular cab/eight-foot-bed combo – which the F-150 and Silverado still offer.

Like all current 1500s, the Tundra’s bed walls are so high it can be difficult to reach into the bed to get things out of the bed . . .  without standing on a step ladder. 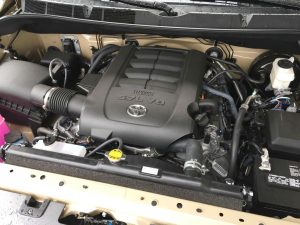 All Tundras comes standard with the same 5.7 liter V8, which produces 381 horsepower and 401 ft.-lbs. of torque – which enables every Tundra to pull as much as 10,200 lbs. without paying extra for an optional engine – or a more expensive trim.

And you still don’t get more horsepower.

To get it you have to move up to the LTZ trim and then you can  opt for the available 6.2 lier 420 hp V8, which is the strongest in the class.

You can also get a V8 (5.0 liters, 395 hp) in the F-150 and for less (without four doors). A regular cab XL ($28,745) with the optional 5.0 liter V8 ($1,995) underprices the Tundra by a couple thousand bucks. But the Ford’s V8 – like the Chevy’s – is direct injected and ASS-addled. In addition, the F-150’s whole body body is aluminum – which shaves weight but makes the F-truck much more vulnerable to physical damage and more expensive to repair when damaged. 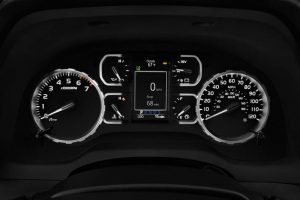 Which probably will make it more expensive to own.

Another Tundra plus is its standard  – and unique in the class – six-speed automatic transmission. All the others come with automatics that have at least eight speeds and some (the F-150 and Silverado V8s) ten. Even the otherwise appealing Ram 1500 pairs an eight-speed automatic with its optional Hemi V8.

The just-updated Nissan Titan also comes standard with a nine-speed transmission – as well as direct injection. And its direct-injected engine demands premium fuel to make its advertised 400 hp.

The Tundra’s 381 hp is delivered on regular 87 octane unleaded.

Interestingly, the Toyota’s top overdrive gear (sixth rather than  eighth or ninth or tenth) is the lowest in the class (.059) so the engine revs at highway speeds are just as low, without all that in-between shifting and without all that additional complexity.

The difference is simpler – vs. more complex.

And potentially more expensive, if something breaks after the warranty ends. 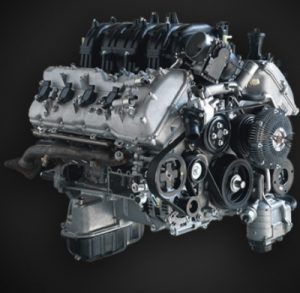 Toyota doesn’t offer a diesel engine – yet  – which is something you can get now in all three of the Big Three trucks now. But the mileage difference between the gas and diesel is probably a wash because of the much higher cost of diesel fuel as well as the higher cost of the diesel-equipped alternative. For example, the Ram’s available 3.0 liter turbodiesel adds $4,995 to the tab.

It is capable of 30 on the highway – vs. a best-case 18 for the 4WD-equipped Tundra. But given how cheap gas is (vs. how expensive diesel is) it’s not likely you’ll save any money this way. 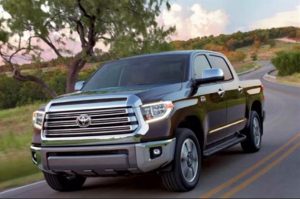 Drive the Tundra and you’ll understand why trucks sell better than cars. They are so much more fun to drive than most cars. There’s background throb of that hunky V8; the effortless pull even when six people are on board and the bed is stacked high with a pallet of bricks.

And the throbbing isn’t interrupted by auto-stop/start (ASS)which is arguably  the most annoying “feature” being foisted on the car (and truck) buying public since automated seat belts.

The reason given for ASS – fuel savings – doesn’t amount to much. The Tundra V8’s 13 city, 18 highway (2WD) is only about 5 MPG off the mileage advertised by the Silverado’s smaller 5.3 liter, 355 hp V8, which rates 16 city, 21 highway. In real-wold driving, it’s a wash – and you’ll never have to deal with the constant annoyance of stop-start cycling in the Tundra. 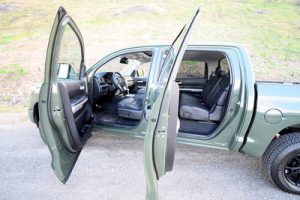 PS: If you’re worried about gas mileage, opt for the available 38 gallon gas tank. It’ll make you feel as though you’re driving a Prius, because even at the rate of 1 gallon converted to gas every 18 miles, the Tundra can travel farther than a Prius before it requires more gas.

Also, the Tundra’s gas neck isn’t capless – which means it won’t annoy you by shutting off the flow of gas while you’re trying to refuel, as is a common issue with capless fuel-fill rigs.

Something that amounts to a lot is the absence of buzzers and beeps. The Tundra lets you drive – without pestering you if a tire touches a painted line, much less creepily trying to countersteer in the direction a nanny thinks you need to go. It is pleasantly retro inside the Tundra, almost like 1995 again – but with almost 400 horsepower (and more than 400 ft.-lbs. of torque) at your command. 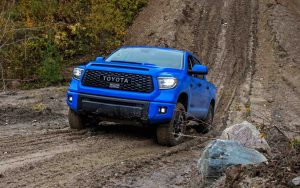 You can also roast the tires at will. Just turn off the TCS – which turns all the way off. Hold the brake – give it gas. Let off the brakes just enough to let the tires begin to rotate. Now floor the gas, modulating the brake.

Another incredible thing is how fast you can drive the Tundra off-road without the rear axle doing the Moon Bounce. It probably is doing the Moon Bounce – but you don’t feel it inside  the Tundra. Maybe it’s special biscuits in between the frame and body. Whatever it is, the leaf-sprung Tundra rides as if it had an independent/coil spring suspension out back. But without the complexity and cost and inevitable down-the-road fix-it issues that comes with IRS. 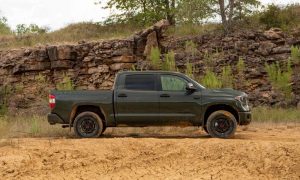 You can still get an eight-foot bed, but you can’t get it with just two doors, which means that a long-bed Tundra is a long truck. Double Cab models with the short bed have a turning circle of 44 feet. With the Crew Max cab and four full-size doors, this widens to 49 feet.

Regardless of length, the bed is tall.

The high box thing is now a universal thing and whatever you think about the look, it makes it hard to get at the things in the bed – even if you’re a taller-than-most guy, as I am. Getting to whatever you’ve got in the bed often means getting in the bed first. Toyota does not offer a built-in step ladder (as the F-150 and Chevy do) or even a milk crate tossed into the bed by the dealer at time of purchase. 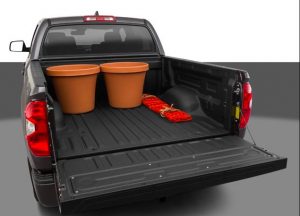 There are however some compensatory features, including configurable cleat tie-downs and lockable bins, one of which is insulated and can be filled with ice to keep things cool.

The Crew Max has more legroom (42-plus inches) than in the front seats of many full-size cars and ore head and shoulder room than any of them – unless we’re talking ’78 Lincoln Town Cars.

And the room for laptops, cinder blocks, cell phones (as many as you have pockets for) is practically limitless. Of course, other big trucks are similarly spacious but few are as wonderfully non-naggy as this one is. 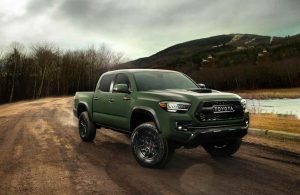 The Tundra does not have a Tee-Vee sized infotainment system – nor a digitized dashboard, either- which triggers the app-obsessed metrosexual press. Which is another reason to really like this truck.

It is a truck that does not need such distractions because it is the main event.

It’s also a more American truck than the Chevy Silverado and Ford F-150 are hecho en Mexico – while the Tundra is made in the USA (San Antonio, Texas).