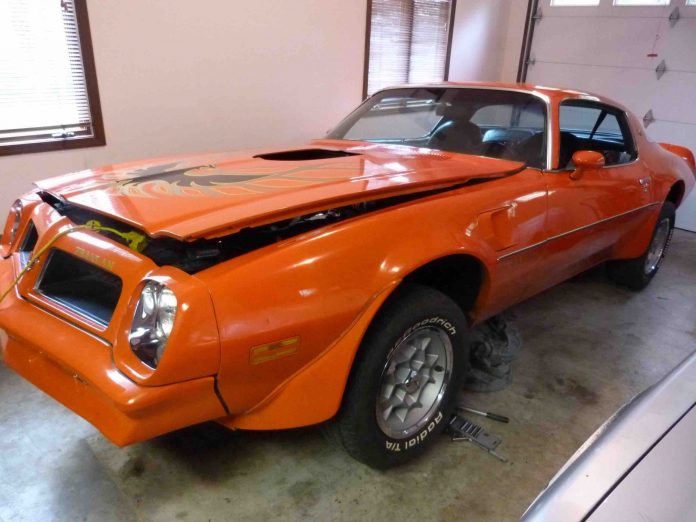 Possibly. . . maybe . . . if the ghost of Burt Reynolds favors me . . . the Great Pumpkin will soon ride again. The heartening news is that it seems like it might. I won’t know for sure, though, until I can actually drive it.

Italicized to emphasis that I have “driven” it …  just without it moving.

With the rear end off the ground, in the garage. Because it’s raining out. Has been raining, for the past four days straight. It might float if I make the attempt. Plus, the Pumpkin doesn’t get wet. 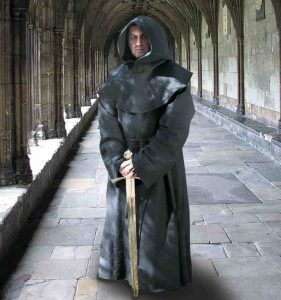 But I just had to know whether there was any reason for optimism – at least as regards the Pumpkin. There’s not much reason to be optimistic otherwise – Fear Masking being on the rise even as the mortality rate from the WuFlu (not “COVID-19” … don’t fall into the trap of using the enemy’s language; in this case, the new ALL CAPS and ominous-sounding appellation being hard-sold to sell the populace on the idea that WuFlu isn’t just another Corona virus – which is exactly what it is) is not only on the wane but never waxed.

At least, never waxed to the degree advertised – and waxed almost exclusively the already waxed (from old age and other sicknesses).

The TA, as readers of this column already know, suffered its own bout of Corona about ten days ago. The transmission stopped upshifting. Well, it wouldn’t shift out of second gear. With 3.90 gears in the pumpkin (the rear axle) that made for a screamin’ mimi 35 mile drive back home. But the important thing – and the reason why the TA has been the one constant in my life for almost 30 years now, outlasting my marriage and practically everything else – is that it never lets me down.

Crippled yes. Inert, no. She got me home. It’s like that harrowing yet triumphant scene in the classic film about WW II German submariners – Das Boot – in which the ship almost drops to crush depth but doesn’t and comes to rest on a fortuitous sandbar. After some desperate repairs – and prayers – the crew restarts the MAN diesels, blows the tanks and stare hopefully at the depth meter. Slowly – hopefully! – it quivers a little, then – yes! – it begins to move! The ship is rising! Salvation!

Just the same, I watched the needle. Kept the RPMs steady at 3,400 and tried to maintain a constant speed, so as to not upset further whatever was upset inside the transmission. And eased her into the safety of dry dock – my garage.

Thence came a process of elimination. Automatics are mysterious transmissions; unlike a manual, inscrutable things can go wrong deep inside the valve body, which is full of narrow passages critical to the proper shifting of the thing. There are also other things, which I checked and eliminated, one by one.

The governor, first. This has springs and weights and if the spring breaks and the weights don’t spin outward (or retract) as they should from the force of the spinning of the shaft they ride on, the shifting can get shifty. It was pulled and examined and not found wanting. 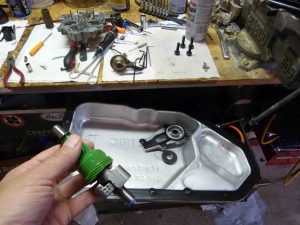 Next, the torque converter clutch solenoid and the wiring to and from. These also checked out. A close check of the tension of the throttle valve (TV) cable, which if too loose or too tight can also result in shifty problems. It was possible the adjustment/lock nut worked loose. I rechecked everything – alles in ordnung.

New filter, of course. And fresh fluid – which could be just exactly what is wanted. It was just possible that something was sticking inside the valve body – the hydraulic control circuit of an automatic tranny. Fresh fluid (and fresh additives) might clean that out. Regardless, there’s no checking the rest out without refilling the box with fresh fluid – and so I did that.

But not quite enough. Actually, not close to enough.

Usually, a GM automatic (2004R in this case) will take roughly five or so quarts of fluid after dropping the pan for a filer (and fluid) change. But in this case, the pan was off for roughly ten days and a lot more fluid escaped. It took eight quarts plus a pint more to top off the 2004R.

It is really important to get this right before you attempt a drive. Because it is really easy to burn up an automatic by subjecting it to heavy loads when very low on fluid. This is why I always do the initial restart with the TA’s tail end off the ground. The wheels meet almost no resistance this way, which is a sound safety precaution until you’re absolutely sure of the fluid level.

Which takes careful – and partial – addition, a pint at a time. So as to avoid overfilling (and having to drain the thing, again). 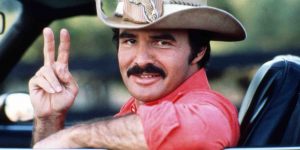 Engine warmed up – and tranny full – I crossed myself and moved the shifter into Drive and felt it engage! Happy day, even if raining like it’s the End of Days. Then Reverse, then First and Second – to get the fluid circulating. Then Park and a recheck of the level, just to be sure.

Confirm this twice at least!

Fourth (which is overdrive) came next.

It appears the Pumpkin will ride again. As soon as it stops raining, anyhow.