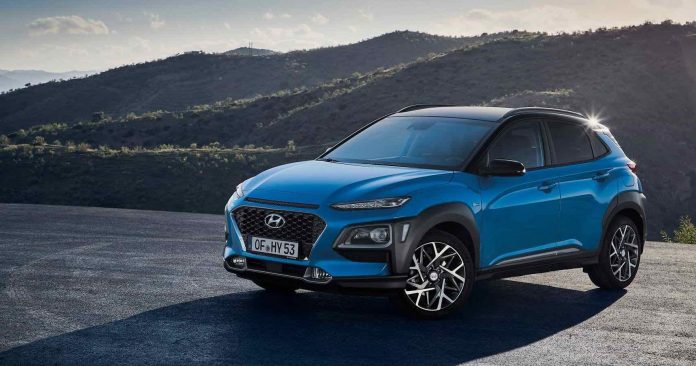 Crossovers are so popular, they’re getting smaller.

Examples include the Honda HR-V, which was one of the very first subcompact crossovers – and also the Mazda CX-3, which is one of the most stylish.

One of the latest is the Hyundai Kona, which came onto the market in 2018.

All of them very small – on the outside.

But they’re also much roomier inside than cars with much larger footprints – with about three times as much room for cargo as a mid-sized car. Which probably explains why mid-sized cars are selling like Mets hats at Yankee stadium. 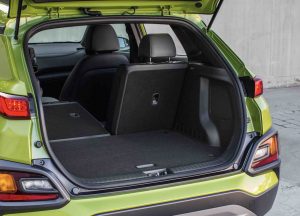 The Kona is also different under the hood – which probably explains why it has become the best-selling newcomer in its class.

Because – like all crossovers – the Kona’s cargo area isn’t a separate and walled-off compartment. It’s right behind the back seats – and with the back seats folded forward, the entire interior becomes, in effect, one very large “trunk.”

What sets the Kona apart from other crossovers in this class is that it’s available with more than just one take-it-or-leave-it engine. Also, you can order its optional high-performance engine with – or without – all-wheel-drive.

One size does not fit all.

Prices start at $20,300 for the base SE trim, which comes standard with a 2.0 liter four cylinder engine – no turbo – a six-speed automatic and front-wheel-drive. AWD is available as an a la carte option, bringing the MSRP to $21,700. 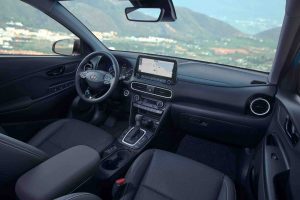 There are also SEL and SEL plus trims, with the same drivetrain availability.

Limited and Ultimate trims get the underhood upgrade – a 1.6 liter engine with a turbo – and more horsepower.

And no matter what you spend, you won’t buy ASS – automated stop/start. Hyundai doesn’t include this “feature” as either standard or optional equipment.

There’s some other things you don’t get that you might like, too – such as a pull-up emergency brake instead of a push-button electronic parking brake. 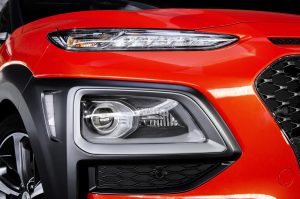 Takes up almost two feet less space in your garage than a compact sedan – while taking three times-plus as much stuff inside.

Available with more than one engine.

Available with AWD – and without AWD.

A bit less roomy than the HR-V.

A bit less sexy than the CX-3.

High-performance engine only available in the Limited and Ultimate trims. 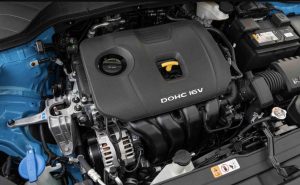 The Kona’s 2.0 liter paired with a six-speed automatic – not a continuously variable automatic – with either FWD orAWD.

So equipped, the Kia matches the performance – and mileage – delivered by its rivals.

But if you want to exceed their performance – without much of a mileage penalty – order a Limited or Ultimate. Both of these trims  come standard with a turbocharged 1.6 liter engine that produces 175 hp and 195 ft.-lbs. of turbo-boosted torque at 1,500 RPM. This engine is the most powerful available in the class. 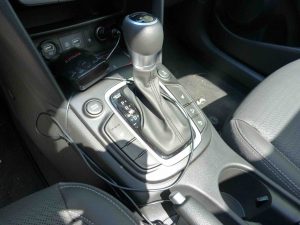 It is also paired with a different transmission – a seven-speed dual-clutch automatic. Together, the combo delivers zero to 60 in 6.5 seconds, the quickest-to-60 time in the segment.

To put this performance into context:

The one-engine-only HR-V needs more than 9 seconds to get to 60. Even the sporty-looking Mazda3 is far behind the hustlin’ Hyundai, taking about 7.2 seconds to achieve the same speed.

Amazingly, the EPA rated mileage numbers of the Kona’s turbo’d engine are only negligibly lower than those posted by the standard non-turbo’d engine: 26 city, 29 highway vs. 26 city, 30 highway.

Speed may cost money – but (in this case) it doesn’t cost gas money. 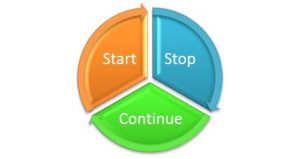 It also won’t cost you ASS. Neither of the Kona’s engines comes with automated stop/start, the “feature” that’s becoming hard to avoid in new cars that automatically shuts off the engine (and with it, in may cases, the AC) at every red light and pause in traffic – then automatically (but not instantly or silently) restarting it when the light turns green or traffic begins moving again.

ASS is marketed as a fuel-saver, but the savings are small – on the order of 1-2 MPG overall, maybe. At the cost of smoothness and quiet.

Bless Hyundai for not making it standard. 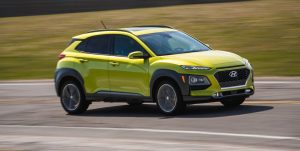 Performance is a Kona strong suit. Also how it’s applied. Which is via either a conventional six-speed automatic or (if you get the turbo) the seven-speed dual clutch automatic. Both shift through gears – as opposed to varying ranges – as the continuously variable (CVT) automatic in the HR-V does.

The difference in sensation – and sound – is marked, especially when you ask for rapid acceleration. Instead of a surge, shifts – and a reduction in engine speed with each shift up, which reduces engine noise.

CVT-equipped cars equipped with weak engines produce a racket rather than acceleration.

And with the turbo, it’s much less necessary to rev the engine, regardless – because of all that low-speed torque. 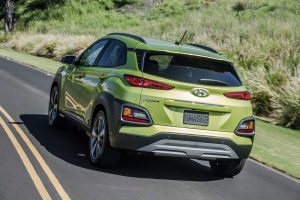 There’s also power to pass, which is sorely lacking in one-engine-only rivals.

The difference here is most noticeable when you’re on the highway and driving around 60 or so and need the beans to get around a tractor-trailer struggling to maintain 50. In the others, you might as well sit back and enjoy the wait because if you try to get around the rig you probably won’t. Not without becoming a chunk of grease in the arterial road, blocking the progress of everyone else trying to get around the rig.

Of course, the standard engine also suffers from the slows – but the point is you can opt out of the slows, which you can’t with the others. And you can still have a conventional/geared automatic rather than a CVT, which for some is a deal-breaker. 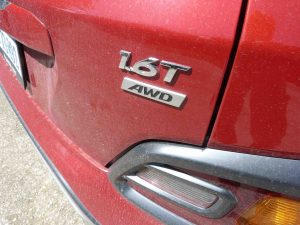 Another thing you can opt in – or out of – is AWD. Even if you do get the turbo. This is pretty unusual – and not just in this class of vehicle. The general practice, when a given FWD vehicle is offered with a high-performance engine, is to pair it with a mandatory AWD system. This does add tractability – the higher power distributed to the pavement via four rather than two wheels. In the Kona’s case, you also get a locking rear diff and a revised  rear suspension designed to optimize the whole enchilada.

There is no question this enhances winter-weather grip as well as dry-weather handling.

But, the AWD just as unquestionably adds both cost up front as well as potentially down the road and weight all the time. You pay more – and you don’t go as fast. 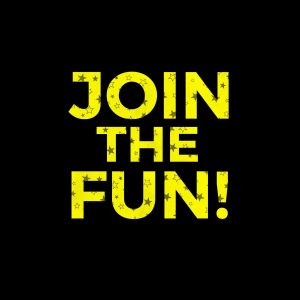 A bit less control can be just that. The driver modulating wheel-slip rather than the vehicle. And let’s be honest, it is fun to chirp the tires sometimes, especially in a vehicle that is built mainly to be . . . practical.

All work, no play makes Jack a dull boy.

The subcompact Kona is only 164 inches long.

To get a sense of how small an exterior footprint that is, compare it with the footprint of a one-size-larger compact sedan like the Honda Civic, which is 182.7 inches long – a difference of 18.7 inches in length. 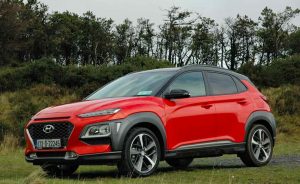 But the Kona has 45.8 cubic feet of cargo space with its back seats folded – vs. 15.1 cubic feet in the Civic’s trunk, which can’t be expanded because it’s walled off from the rest of the cabin.

The Kona’s space for cargo decreases with its back seats upright, but there’s still 19.2 cubic feet and it’s functionally more than that because of the taller roofline and because you can route cargo over the seats while people are still using them.

That’s something you can’t do in any sedan – without a Sawzall. 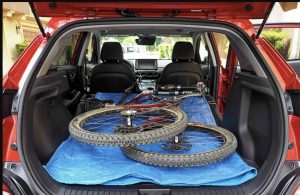 The Kona also has more room behind its back seats – and with its back seats down – than the Mazda CX-3 (17.8 cubic feet and 42.7 cubic feet) and nearly as much as the class-best (in the space race) Honda HR-V, which also has significantly more back seat legroom (39.3 inches) than either the Hyundai (34.6 inches) or the Mazda CX3 (35 inches).

But neither of them offer more than just practicality – which the Kona comes standard with with while also offering other things.

One such thing being a pull-up emergency brake lever rather than an electric parking brake. The latter is On – or Off – and so doesn’t give the driver much control over braking in an emergency. Pull-up emergency brakes allow the driver to manually modulate braking force, thereby bringing the car to a safer – controlled – stop in the event the primary (hydraulic) brakes fail. 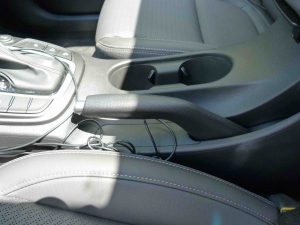 There’s also matte-plastic fender flares, slit-eye LED lights and a kind of blackout treatment for the C-pillar that jazzes up the look just enough to make it interesting – which complements it not being disappointing when you drive it.

Like almost all new cars, the Kona isn’t a Blue Lite Special – remember them? – even as it comes. 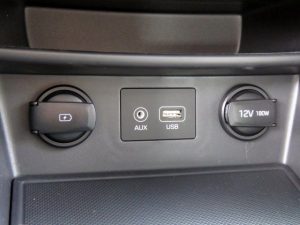 The base SE trim comes with remote/keyless entry, a 7-inch LCD touchscreen interface, AppleCarPlay and Android Auto, plus – of course – AC, power locks and windows. It’s living large without paying large – if you can remember when such amenities weren’t even available in high-end cars, which was as recently as ten years ago.

You can also get today’s high-end features (wireless cell phone charging,  premium eight-speaker audio system in the higher trim) without the high-end charge. 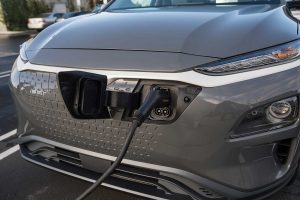 Of a piece with the simpler is better philosophy, it’s worth a mention that the SE comes with manual, you-control-it AC. Turn a knob to the left or right to increase – or decrease the temperature and the same for the fan. Electronic climate control is available, but it’s skippable if you prefer the simpler – and probably more long-term-reliable manual set up.

Also, you get a 12V power point and USB and Aux ports – to power up anything you’ve got, just about. Not just one or two of them.

If you like the Kona but don’t want to burn gas you might want to have a look at the electric Kona. It’s the same thing – without an engine. Instead, a rechargeable battery pack and electric motors. You pay more for the car – about $36,000. 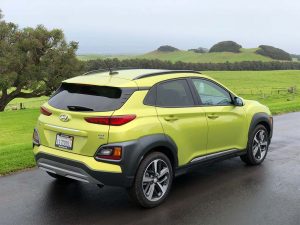 But you’ll never pay a cent for gas.

Small doesn’t have to mean cramped.

Or no fun, either.