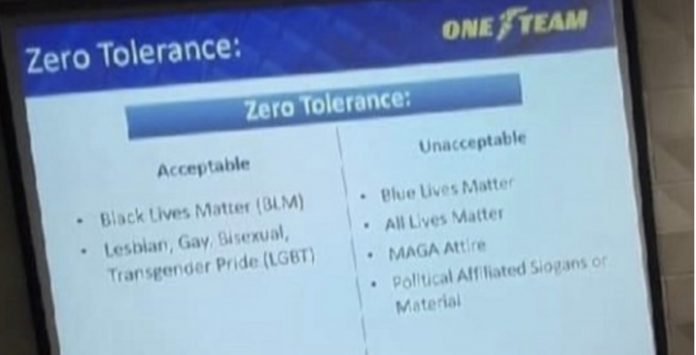 It is generally a good idea to not feed cockroaches as doing so emboldens them as well as sustains them.

Ergo, do not buy tires made by Goodyear.

Which considers itself the arbiter of which opinions its employees may have, Goooguhl-style – only worse because Goooguhl can’re fire you (yet) for posting a Tweet it doesn’t like (unless you actually work for Gooooguhl).

Here are some of the opinions you may not hold if you work for Goodyear:

All Lives Matter (because only black ones do at Goodyear).

These are Unacceptable – Goodyear’s term.

On the other hand, it is Acceptable to voice opinions in support of:

Black Lives Matter (despite the racist prima facie and the Marxist fact).

It’s not listed on the Unacceptable side of the ledger but the non-mention of heterosexuals lets it be known that one had better not express “pride” (an odd thing to boast of) regarding one’s private sexual interests in the opposite sex.

The Acceptable and Unacceptable were presented to Goodyear employees as part of a “Diversity” harangue – the latter in air quotes to mock the absurdity of using that word to describe its suppression.

Which the company says is anything but:

“Goodyear is committed to fostering an inclusive and respectful workplace where all of our associates can do their best in a spirit of teamwork. As part of this commitment, we do allow our associates to express their support on racial injustice and other equity issues but ask that they refrain from workplace expressions, verbal or otherwise, in support of political campaigning for any candidate or political party as well as other similar forms of advocacy that fall outside the scope of equity issues.”

Provided your views do not “fall outside the scope of equity issues.”

Whatever happened to making tires – as opposed to enforcing orthodoxies?

Goodyear is no longer a tire maker – just as GM is no longer a car maker. They – and a growing roster of corporations are ideologists now, with their product being obedience to orthodoxies and the cars and tires being incidental.

Our money is a potent weapon.

To corrupt an old slogan in a better direction:

And let them know why.