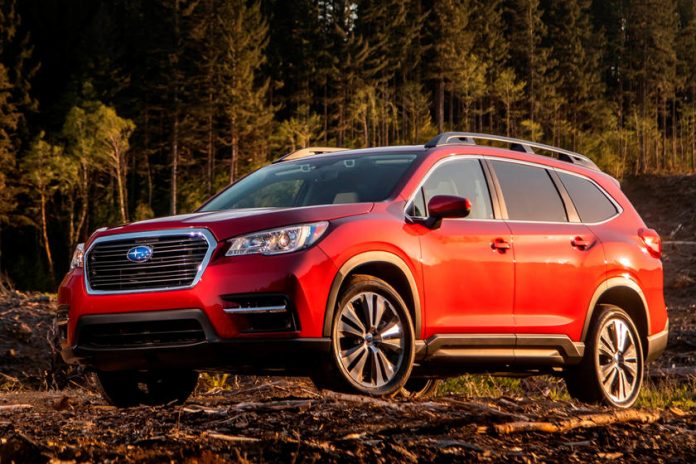 Subaru’s thing used to be small, rugged cars – sedans and wagons – that were built to deal with bad roads and poor weather as well as a 4WD truck or SUV  . . . without actually being a truck or SUV.

Then trucks – big ones, especially – got popular. And more like cars, in terms of their on-road civilities and amenities. Also the big SUVs and crossovers, which emulate them.

But there’s one thing about it that’s still small.

The Ascent is the biggest vehicle Subaru has ever made. It’s a medium-large crossover with three rows and seating for 7-8 depending on the configuration and similar to others in the class such as the VW Atlas, Mazda CX-9 and Honda Pilot. Note that all of those brands also used to specialize in small cars.

But, times have changed.

Bigger vehicles have become popular because many people need a one-size-fits-several vehicle that can also carry (and pull) a load.

The Ascent is designed for such duty.

Where it chiefly differs from otherwise-similar models in the segment is that it comes standard with all-wheel-drive (optional in the Mazda CX-9, Honda Pilot and VW Atlas). It also comes only with a small-for-its-size 2.4 liter four cylinder engine, which is about the same size as the engines Subaru puts in much smaller cars, like the Impreza and Outback. 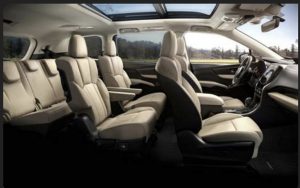 It is, however, a much more powerful engine than Subaru puts in most of its smaller cars – and nearly as powerful as the engine Subaru puts in its famous high-performance small car, the WRX.

Prices start at $32,995 for the base trim – which is less than the price of all of its main rivals when those rivals are equipped with their optional AWD systems. It’s also less than some of them, regardless.

A top-of-the-line Ascent Touring stickers for $45,445. This one comes wth captain’s chair seating for seven rather than a second row/three-across bench and seating for eight, a 14-speaker Harman Kardon audio system, panorama sunroof, heated steering wheel and seats for the first and second rows and perforated leather seats.

One of the best deals going in the class, especially if you want an AWD-equipped large crossover.

Standard small four makes almost as much power as some of the bigger (and usually, optional) V6s in rival crossovers.

Gas mileage of the small four is about the same as the mileage of bigger V6s in the class.

Unlike most of its rivals, the Ascent comes with the same engine – and what’s bolted to it – irrespective of trim. 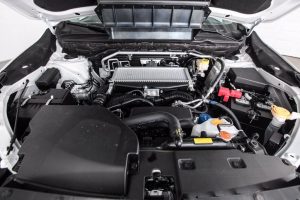 It’s also a unique engine, vs. the engines available in rivals.

It’s a four – but flat, with its cylinders laid out in pairs, facing each other across the crankshaft. This is the boxer layout, also used by Porsche and (once upon a time) VW, in the classic Beetle. The layout has packaging advantages over the more common in-line (and upright) four, because it is half the length of an inline four and because it is . . . flat.

Which leaves more room above.

It also distributes the weight of the engine more evenly, one side of it on each side of the vehicle’s centerline as well as closer to the ground, which is helpful in terms of balance and so handling. 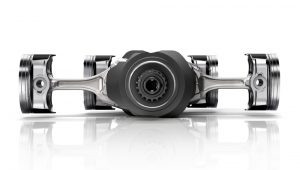 The four is little relative to the size (and weight) of the Ascent – just 2.4 liters. But like other small engines that are being put into large vehicles, it is turbo-boosted to make the power – on demand – of a larger engine.

In this case, 260 horsepower – which is more power than the even smaller (2.0 liter) turbocharged four that is standard in the Ascent-sized VW Atlas, which makes just 235 hp. It is also nearly as much power as the Atlas’ optional – and  much larger – 3.6 liter V6, which manages just 276 hp.

Of its main rivals, only the Honda Pilot comes with more engine – and more power – standard. That one has a 3.5 liter, 280 hp V6 regardless of trim and can also pull the same 5,000 lbs. as the Ascent.

It’s interesting because the main thing driving the small-engines-in-big-vehicles thing is the putative decrease in appetite that results from having fewer cylinders to feed. But that doesn’t happen when the cylinders remaining have to work harder to make up for the lack of cylinders.

Which is what turbos – in this type of application – are there to help with.

When the driver needs more power, the turbo boosts the small engine – to provide it. The theory is that when the driver doesn’t need the power, the smaller engine will have a smaller appetite. Which it would, if were not for the fact that without the boost, there is often insufficient power.

Hence boost is often being applied- hence not much difference. 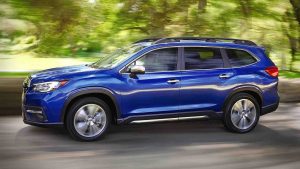 The Ascent would be a pleasant, easy-to-drive large crossover were it not for all the racket made by the saaaaaaaaaaaaaaaaaaaaaafety nannies it comes with. These include a truly obnoxious buckle-up chime that chimes insistently louder if you don’t immediately put the damned thing on, even if it’s only to drive down the driveway to the mailbox.

There is also the ding! ding! ding! of the Lane Keep Assist, which I eventually figured out how to turn off. There is a button located near the rearview mirror; you must push and hold it for a few seconds to get the LKAS to zip it

If not, every time a tire touches one of the painted lines on the road, ding! ding ding!

I didn’t need the “assistance” – the painted lines don’t always correspond precisely with the track of the road – and found the ding! ding! dinging! to be both unnecessary and annoying. 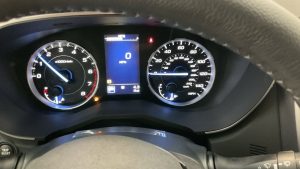 The whole “safety” thing has gotten entirely out of hand. Incompetence is presumed – and competent drivers hassled by the electronic equivalent of a backseat driver except you can’t kick her to the curb. New cars generally – not just this one – beep and chime and hit the brakes and jerk the steering wheel so much it makes you almost not want to drive – which may well be what is wanted, ultimately.

Which is too bad, because new vehicles such as this Ascent have a lot of good points, including that potent little engine under the hood. It feels much stronger than its size would indicate and – indeed – it is as strong as 5 liter V8s in performance cars like the Ford Mustang were as recently as the mid-1990s.

Granted, that’s not as recently as it once was – but it’s still a valid point of reference. 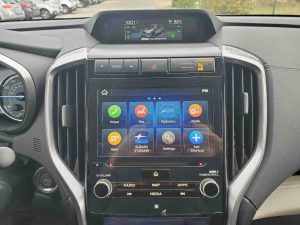 Also, Subaru has done a superlative job of programming the Ascent’s CVT automatic transmission to emulate the feel/shift characteristics of a conventional automatic in every way except the shift shock. Because of course, there are no shifts – from one fixed gear to the next up (or down) – within the guts of a CVT. There are transitions – smoothly – from range to range, which vary continuously.

Many people do not like CVTs and avoid them – not because they are smooth, of course – but rather because they are noisy. They tend to keep the engine at higher RPM as the vehicle accelerates, rather than shifting up to the next-highest gear, as a conventional automatic would   . . . with the engine RPM decreasing as it does and with it, engine noise.

But this one sounds – and even feels – like a regular automatic, with the upside that your coffee won’t splash all over the place, even when you floor it. 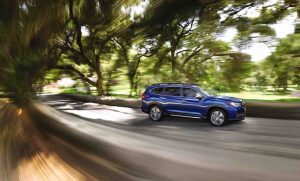 There is also a “safety” feature that adds to the pleasantness of driving the Ascent. It is the Preston Tucker-inspired swiveling headlights that turn with the steering wheel in the curves, illuminating where you’re actually going. These are now standard and the only downside to them is that they probably cost a lot to replaced when they fail. But if they help you see that deer before you hit it – and thereby avoid hitting it – that’s arguably a cost well worth the expense.

As large as the Ascent is – for a Subaru – it is not huge, for a modern vehicle.

It is 196.8 inches long, overall. For some sense of scale, that is about the same overall footprint as a current mid-sized car, such as Subaru’s very own Legacy – which is only about six inches longer (190.6 inches). 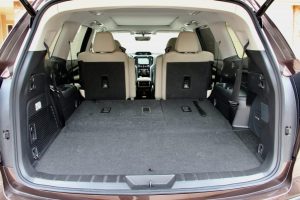 But the Ascent is much taller  – 71.6 inches vs. 59.1 for the Legacy. And much wider – 76 inches vs. 72.4. That is the secret of its much larger feel as well as its look. But functionally – in terms of how much space it occupies, curbside and within a garage – it’s about the same as a mid-sized car like the Legacy.

Yet it can fit up to eight people within itself, which is three more than fit inside an almost-the-same footprint sedan like the Legacy. This is the appeal – as well as the genius – of these crossovers vs. approximately-the-same-size sedans, which aren’t selling well for exactly that reason. 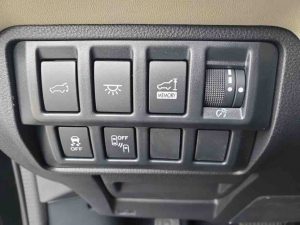 The Ascent hasn’t got quite as much space for cargo behind its third row (17.8 cubic feet) or with its rows folded (86.5 cubic feet) as rivals like the VW Atlas (20.6 and 96.8 cubic feet, respectively) or the Honda Pilot (83.8 total cubic feet of capacity) but it does have more than the Mazda CX-9 (14.4 cubic feet and 71.2 cubic feet respectively) and vastly more than an almost-the-same-footprint sedan like the Legacy, which has no more than 15.1 cubic feet  – its trunk not being expandable.

This practicality is why crossovers can get away with looking pretty much the same.

The Ascent has a toney-looking LCD touchscreen that has the downside of being very touch sensitive. It’s easy to inadvertently touch the wrong icon; this is an issue that besets all such interfaces and it is a strong argument for buttons and switches that have physicality – i.e., that can be precisely touched and which don’t activate (or deactivate) the function they control unless you actually do touch them.

The upside is Soobie’s counterbalancing of that with redundant knobs/switches for many of the necessary and regularly used functions, such as adjusting the volume of the truly excellent 14-speaker Harman Kardon audio rig. Which also has a CD slot – something getting very hard to find in new vehicles.

Something else it has – though you wouldn’t know it to look at it – is a functional hood scoop. Which you need to open the hood to see. It is on the underside of the hood, running extremely low profile. But it’s just as much a cold-air scoop as the scoop you can see on the topside of, say, the Subaru WRX. 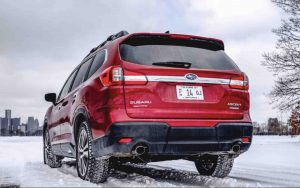 Something else you’ll need to pop the hood to see but which you’ll be glad to see is the oil filter – which is mounted right there, on the top of the engine. You can remove/install it by hand – a grateful thing when it comes to oil change time.