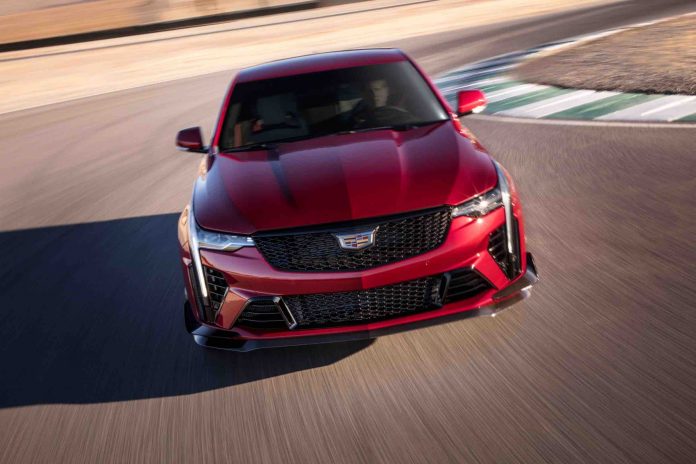 Something almost as unusual has just been sighted: A Cadillac sedan with a manual transmission.

Plus 472 horsepower. Through the rear wheels only.

The CT4 is Cadillac’s compact-sized, entry-level sport sedan. It normally comes with a turbocharged four cylinder engine and an automatic transmission. 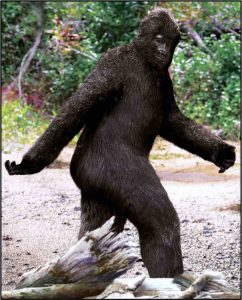 The CT4-V Blackwing comes with a V6 and two turbochargers.

The automatic is optional.

The CT4-V Blackwing is also not available with all-wheel-drive. It is exclusively rear-drive.

That plus the third pedal makes it as uncommon as Bigfoot.

Only this one’s for real.

The Blackwing trim – and the manual and twin-turbo V6 that define it – are new for 2022.

The standard manual sets this apart from automatic-equipped rivals such as the BMW M3 (a manual is available, at extra cost) and automatic-only rivals like the Mercedes-Benz CLA AMG45.

Reasonably priced – given the price of the competition.

Something different is hard to put a price on.

If you want to shift for yourself, it’s still going to cost you almost $60k. 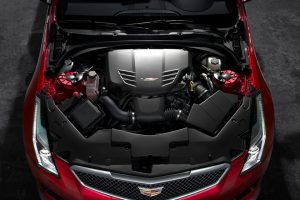 GM uses the 3.6 liter V6 that is the beating heart of the CT4-V Blackwing in many GM models, ranging from the Chevy Camaro to the Buick Enclave. But it beats a lot faster in this Cadillac, courtesy of a pair of turbos and various other upgrades that boost the power to 472 horses and 445 ft.-lbs. of torque.

This makes it as or even more powerful than several current high-performance V8s, including the 460 horsepower 5.0 liter V8 in the Mustang GT and the 470 horsepower 6.4 liter V8 used in the just-launched Jeep Wranger 392 I test drove last week.

No surprise, the Blackwing is extremely quick. It can get to 60 in 3.8 seconds. It is also very fast. GM says the top speed – not electronically limited, as in many rivals – is 189 MPH.

The surprise is that getting there is more up to you. 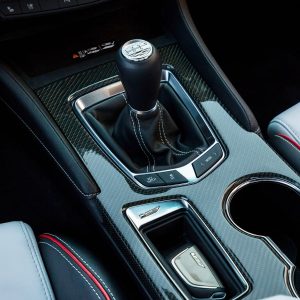 It kept the people who probably shouldn’t try to drive such cars out of trouble.

But automatics have largely replaced manuals – even in high-performance cars. For three main reasons. One, they can be programmed to shift faster and more accurately more consistently than a human driver can consistently shift a manual; the result is consistently (but not always) better performance, in terms of the numbers. 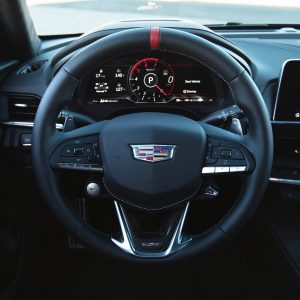 And car companies love to tout numbers. Zero to 60, quarter-mile; through a road course.

Two, the automatic can also be programmed to maximize the car’s gas mileage – on the government tests that determine whether a car achieves the average MPG number decreed as par by the government. Falling short of that number defining a “gas guzzler” – which incurs fines, passed on to the buyer in the form of a higher price for that car as well as all the cars made by that company, as the fines are based on fleet averages. 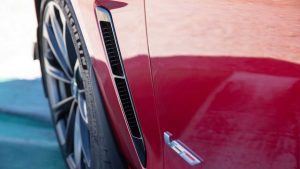 And that, ultimately, is what it’s all about.

But Cadillac decided to give people the choice – and even more laudable, to make the manual-equipped Blackwing lower cost. Two grand less – which is no small thing, even at just under $60k.

It’s six months of free gas, at any rate.

A final interesting thing about this high-performance car is that it is not all-wheel-drive or even available with it. All of its rivals are sold only with AWD, which provides the objective benefit of greater controllability at the cost of zero tail hanging out, rear-tires-roasting fun.

It also helps keep the car’s price under $60k, though just barely. 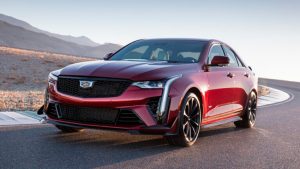 This Caddy does zig. Remember the commercial?

That was back in the late ’90s, when Cadillac was rebooting itself as an American alternative to BMW, with sporty sedans like the Catera that were available with – you guessed it – a manual transmission.

But the Catera never zigged like this Caddy can.

427 horses through two wheels – the rear wheels – is just the ticket for sideways running, whenever you like. Just turn off the stability control – and put your right foot to the floor. Instant asphalt abuse. Your left foot will be busy with the clutch, while your right hand manages the gears. This involves you in the action much more so than the usual put it in Drive and floor it, which is something almost anyone can do. 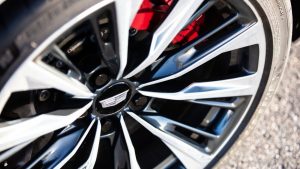 In this car, you’ve got some fun things to do. The car doesn’t launch. You launch the car. Watch the light. Bring up the revs and – just at the right moment – let up the clutch, just so, modulating throttle as you do to keep it all hooked up, or at least somewhat. Then grab the next gear, left and right foot in alternating syncopation.

It takes a bit more skill to do this well, obviously  – which makes it more satisfying. And fun, when done well – an intangible increasingly absent from even very high-performance cars, which have not nearly enough personality to go with their power.

This one has an abundance of both. 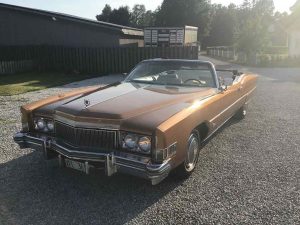 The V6 is not a V8 but you’d be hard-pressed to tell it from what happens when you punch it. Or even just press it, lightly. V8s  were once regarded as the crown jewel of a true high-performance car not so much because of their high-power but because of their tremendous, effortless low-end torque.

It is also why Cadillac was once defined by its huge V8s, which made even 4,500 pound Eldorados and Fleetwoods feel  . . . fleet.

This used to take displacement – liters and cubic inches. Cadillac had the biggest V8s GM ever made, some of them displacing 500 cubic inches, or more than 8 liters.

Now a fairly small V6 like the one in this Caddy can make as much or more torque than those old torque monster V8s . .. via boost. The turbos breath heavy, summoning 445 ft.-lbs. out of just 3.6 liters, an achievement right up there with catching a Bigfoot and bringing him in to town for everyone to see.

Only this is for real. 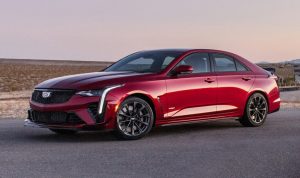 This is a small car.

That’s also a historically unusual thing – for Cadillac, which was once the brand known above all for its big cars. This car – just 187.6 inches long overall – would just about fit in the trunk of a ’74 Fleetwood Brougham d’ Elegance.

That means there is only so much room to work with inside this car. Since it’s important for the driver (and front seat passenger) to have plenty of room, it becomes unavoidable that the backseat passengers have much less room.

So there’s 42.4 inches of legroom up front – but just 33.4 inches behind. And behind that – in the trunk of this car – there is almost no room at all. 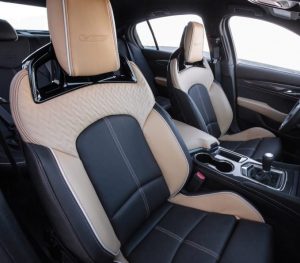 These stats explain why sedans – especially small ones – are becoming almost as rare as Bigfoot – in favor of crossovers, which by dint of their layout can easily provide three times as much space inside while having about the same footprint outside as a small sedan. The reason for that being the passenger compartment and cargo compartment aren’t separated. The hatchback opens up to the rearseat area and the seats can be folded down to make one area – making for a lot of usable space.

A sedan’s trunk is walled off from the rest of the car’s interior; a passthrough can help but with a lid rather than a liftgate, there’s still only so much you can fit. 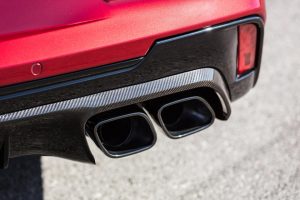 But this sedan has one thing almost no crossovers still have – a third pedal – and that makes up for a lot.

Visually, it’s not an arresting car. The overall shape is generic modern sedan, with the only clues that it’s a Cadillac sedan being the vertical-stacked/slit-style head and brake lights. There is also some carbon fiber, a set of air vents in the front fenders – but neither of those touches are uncommon.

The only obvious clue that it might get you arrested is the ducktail wing on the trunk -which could keep you out of trouble (with physics) at the near 200 MPH speeds this car can attain. 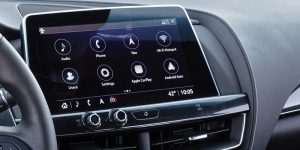 Otherwise, it can pass for nothing out-of-the-ordinary.

Which is a plus given that it isn’t.

A fun feature that comes with the deal is a built in camera system that records your performance – so you can view it later. Not merely your numbers – how fast to 60 and such – but actually video records you going through the curves, almost like ESPN. This way, you can share your memories of your day at the track, visually.

Also part of the deal is an enlarged (over the standard CT4’s) digital dash display and a phenomenal 14 speaker ultra-premium audio system. 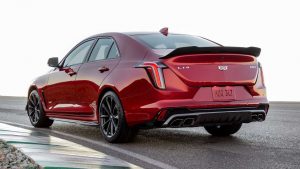 Plus huge, very high-performance brakes, GM’s Magnetic Ride Control suspension system, tuned for high-performance dynamics, heavy duty cooling systems (including for the differential, which is cast of aluminum to further shed heat as well as reduce weight) and a set of sticky Michelin Pilot Sport 4S tires developed specifically for the Blackwing.

Inside, there’s a set of firm but very comfortable (because 18-way adjustable) sport seats with massaging  lumbar function. Plus more carbon fiber and contrast-color stitching.

Bigfoot may be real. This Caddy is the real deal. 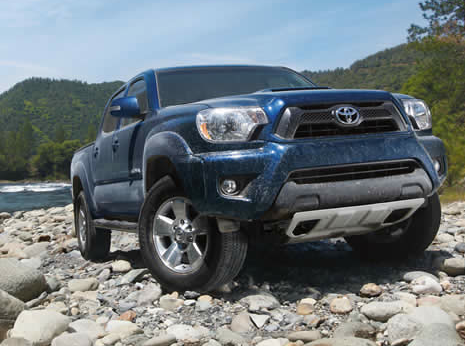