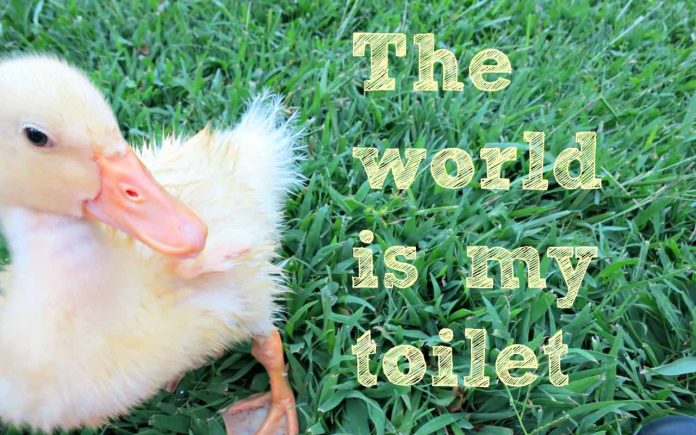 I have learned a few more things over the past month or so about what I did right – and what I didn’t do, at all – when I built my new chicken/duck coop last summer.

Ducks, unlike chickens, squirt. Powerfully. Abundantly. Chickens have the virtue of dropping their stuff, so it usually just falls (vertically) wherever they happen to be standing when nature calls. If they are on straw bedding when this happens, the straw absorbs it and you sweep it out every so often. I hadn’t thought about the ducks when I laid out the coop’s insides.

Now I know – and (weather permitting) this week will install countermeasures, in the form of those deflectors mentioned above. Just a few sheets of OSB scrap, mounted at an angle from the concrete floor to the T1-11 siding at a height just above the elevation of the ducks’ cannons. These can take the hit – and more to the point – are easily replaced as necessary much more easily and cheaply than pulling the siding.

You will also need more straw – more often – if you decide to have ducks. They are wonderfully interesting, personable and tasty birds. But they are truly dirty birdies who poop almost as often as they quack. And now you’ll need a place to store that hay. If you don’t – if you just leave it outside  – it is likely it will get wet. Keeping the interior of your coop dry is important – for the health of the birds and the longevity of the structure. If it gets and stays wet inside, it is likely you’ll be building a new coop sooner rather than later. 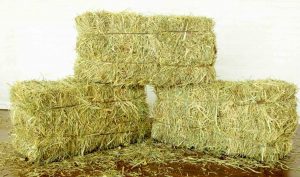 I have a shed adjacent to the coop where I store hay – for now. But I do not intend to store it there for long because it takes up space needed for other things and it makes a mess in there, too. For this reason, I am going to add a hay bin near the coop, which will keep it dry and handy.

I did get the coop wired – just in time. December here in the Woods was deceptively summery, with daytime temps sometimes well into the 70s and few days that got much colder than the 40s. Then January came. It got very cold, very quickly. Highs in the low 20s and lows in the pre-teens. Having electricity in the coop to power a heater probably saved my birds from freezing to death. I could have run an extension cord, of course – but being able to just plug in the heater is a real luxury.

But I found that even with power, water will still sometimes freeze.  Even if in a heated bucket. Not all of it – just the surface, like a frozen-over pond. But it might as well be frozen solid as far as the birds being able to peck through it, to get a drink. Because of that, I had to trudge outside every morning – in the 13 degree cold – to bring hot water to the birds. A more powerful water heater may be the solution. I am also considering burying the heated bucket so that it is shielded by the earth and we’ll see whether that works. 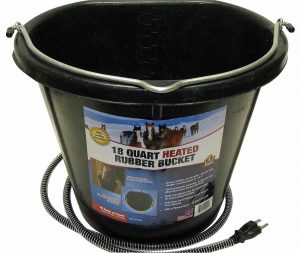 The other thing I did – and was glad I had – was to build a sheltered (overhead) run for the birds. Not so much because of the threat of hawks but rather the threat of snow. If I hadn’t used some of the extra tin roofing I had on hand to build a covered run appx. ten feet long by five feet wide, the birds would have had trouble exiting the coop – after we got a foot-plus of heavy snow. Cooped up like that for days/weeks on end would likely have resulted in some of the birds pecking others to death and the certainty of an accelerated/disgusting mess as they’d have all been ejecting their effluvia inside the coop.

Because I’d built the covered run, they had room to walk around. Not a lot but better than none. It made dealing with the last several weeks much more tolerable – for them and for me.

As the weather warms up, I will be adding the final touches to the coop – including the windows, assuming I can get them. I tried ordering them a couple months ago; they are all on backlog due to supply chan collapse. Let’s go Brandon! The windows aren’t just decorative; they will provide airflow/ventilation in the summer as well as sunlight year ’round.

That plus an extension nesting box – for the ducks. This will not be partitioned – as I did for the chicken nesting boxes. Just a roughly 4×2 area for the female ducks to sit on their eggs and take care of their babies in a sheltered (from the other birds) space.

Finally, an egg production report: Even in the depth of winter, my eight hens still produce on average about 2-3 eggs daily. This ought to increase significantly as the weather warms.

The ducks, meanwhile, are almost worth their weight in silver. A store-bought duck costs $45 or more and is smaller than my ducks. The Muscovy males are close to the size of a wild turkey. Instead of a rare (due to the cost) treat, we’ve got ducks to eat regularly – for a fraction of that cost.

Got a question about cars, bikes, or libertarianism? Click on the “ask Eric” link and send ’em in! Or email me at [email protected] if the @!** “ask Eric” button doesn’t work!

Hero on His Cell Phone While Woman Drowns