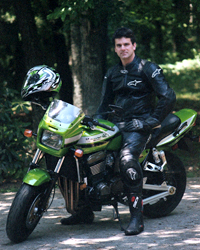 At some point, it occurred to him that cars – and of course, motorcycles – represent freedom, but that the freedom to drive (and freedom to drive what you wanted to drive) was being systematically undermined by authoritarian control freaks dressed in red and blue. His former conservatism evolved into Libertarianism, this oddball idea that live – and let live – ought to be the basis for human interactions.

Eric lives in the boonies of rural Southwest Virginia with various animals and won’t  get near an airport until the TSA’s Submission Training goes away. He has never worn a Face Diaper and refuses to “practice” Sickness Kabuki, either.

If you’re interested in contacting him about a radio or TV interview, speaking engagement or freelance project, drop him an e-mail at [email protected]