My reply: The value of late second-generation F-cars (Camaros and Firebirds built from roughly 1975 – the first year for catalytic converters and much lower performance – through the end of the second generation in 1981) has been upticking significantly over the past ten years.

Probably because enough time has elapsed that these used-to-be-common cars – which were built in massive quantities relative to ’70-’74 cars – no longer are.  And because they are still relatively affordable in comparison with the ’70-’74 cars, some of which are drawing six figures at auctions. 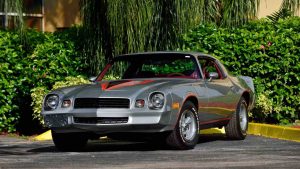 But the ’75-81 cars are catching up. A ’77 Trans-Am (a nothing special ’77 Trans-Am with the standard 400/automatic) recently went for  . . . six figures on the Barret Jackson auction block because it was a black and gold SE car and because (apparently) Burt Reynolds had laid hands upon it. It wasn’t an actual “Bandit” movie car; just one of probably 100,000 black and gold SE TAs that Pontiac made back in ’77-’78.

Your car is at the apex of value for late second-gen Z28s because of its provenance (one owner) the exceptionally low miles/originality (“stock” condition) and because it has the most desirable combination of equipment available that year – especially the manual transmission and eight track.

The next thing to consider is the car’s mechanical condition – and appearance. Here is a general ranking system that is used to quantify both:

You didn’t indicate the condition of your car, so it’s hard to nail this down but, if your car is in #1 or #2 condition, it’s probably worth in the neighborhood of $30k or so. Here is an article you may be interested in published by Hagertys – the classic car insurer.

PS: I once owned your car! Well, I owned a car similar to your car… another ’78 Z28, with Hurst T-tops. Mine had the automatic but it was still one of the most fun cars I’ve ever owned, perhaps because I owned it when I was young and the world was new and still largely sane. I also once had an ’80 – with the “air induction” hood; great fun, too!