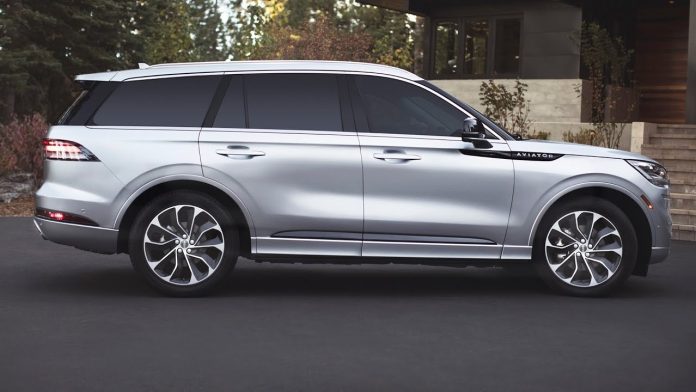 Something almost as big – but not quite. With three rows – the third one usable – that can pull more than its own weight – but without so much length?

And without such a big price?

It’s basically a three-quarters Navigator … for about one-third less the cost.

Like the full-sized Navigator, it’s not a crossover SUV. It’s a real SUV – with rear-wheel-drive (rather than front-wheel-drive) standard, along with a heavier-duty frame and suspension that enables it to tow as much as 6,700 lbs. – more than its own curb weight and several thousand pounds more than the typical same-size crossover can handle. 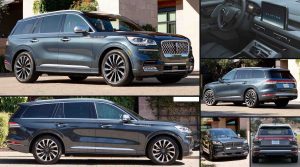 It also comes standard with a twin-turbocharged V6 – just like the Navigator does.

But unlike the Navigator, which comes with just the V6 – the Aviator is available with something in addition to the V6. A plug-in hybrid system is optional that gives you 630 ft.-lbs. of torque and gets you to 60 in just over 5 seconds  . . . while giving you the legs of a Prius.

400-plus miles of range without a fill-up. And without having to charge up. 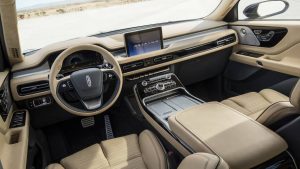 With the hybrid option and Lincoln’s Black Label concierge services – which include pick-up and delivery when maintenance work is needed, VIP access to exclusive venues and other perks – the sticker tops out at $77,691.

One of the few things the Aviator hasn’t got that the Navigator does is a transfer case and 4WD Low range gearing.

A lighter-duty all-wheel-drive system is available optionally – and standard equipment in the Grand Touring and Black Label trims.

The Aviator name returns – as an all-new model based on the same RWD platform as the also all-new 2020 Ford Explorer. 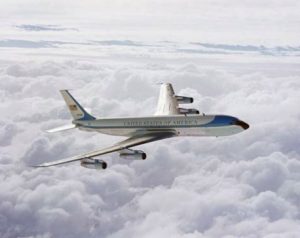 Elegant rather than obstreperous.

Nearly Navigator spaciousness – without taking up as much space.

About two inches less ground clearance than Navigator – and no low-range gearing.

Paper thin (to save weight) hood and body panels – something not good about new vehicles generally. 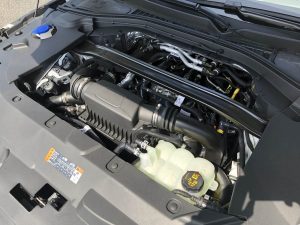 That’s by far the most torque available in anything shy of a Kenworth.

It also bumps the Aviator’s range up to more than 400 miles on a tank – two-thirds as far as you can take a Prius – and twice as fast. It’s also twice as far as most electric cars can go before they have to stop. 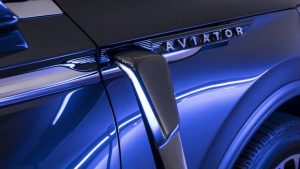 You can plug the Aviator hybrid in – but you don’t have to. This eliminates range anxiety and gives you flexibility. Plug in if you like, when you like – but skip it if you don’t feel like it. Electric vehicles force you to stop – and wait – if you run low on charge.

Have your torque – and eat it, too! 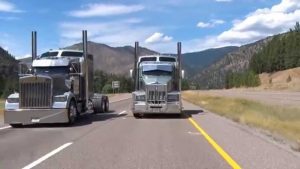 This is probably because of the additional 863 pounds of hybrid gear – the battery pack/electric motor – they’re carrying around. This bumps the curb weight of the thing up to 5,673 lbs. – which is a third heavier than the non-hybrid, rear-wheel-drive Aviator (4,774 lbs.).

But while the hybrid may not tow as much – it definitely hauls.

Both numbers are, for the record, better than the Navigator’s. 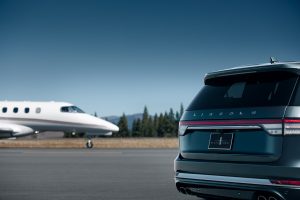 The Aviator feels like it could fly. You almost expect the Sync infotainment system to call out minimums – V1, V2 – rotate! Even without the optional adaptive suspension that scans the road ahead for uneven pavement and adjusts for it ahead of time – you’ll feel as though there’s air rather than asphalt under the wheels.

In Lincoln’s words, a sanctuary. 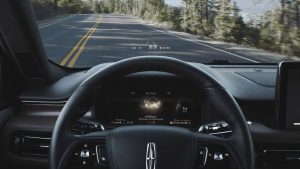 Non-fussy controls for all the luxuries – including the optional massaging seats, which you can activate via a simple, accessible button on the door panels (separate controls for the driver and front seat passenger) rather than having to scroll through multiple tap/swipe menus.

Likewise, the transmission is engaged via pleasantly retro and refreshingly tactile individual push-buttons. One for Park, another for Reverse and one more for Drive – just like Lincolns in the ’60s.  A single rotary/push button controls the various drive modes, including Excite (basically, sport mode) Normal and Conserve.

No learning curve to fly this ride. 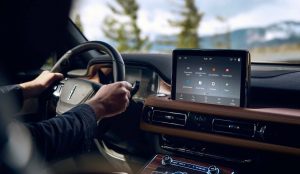 The hybrid version is electric car silent when in EV mode – there are actually two EV modes, Pure and Preserve – and can be driven this way for about 18 miles, depending on the state of the battery pack’s charge and how you drive. Or it can be muscle car ferocious – as your right foot wills. The 630 ft.lbs. of torque on tap negates 5,000-plus lbs. of Aviator in the manner of a UFO’s anti-gravity drive. That much leverage makes the Aviator feel light as a waffle – even though it weighs more than two tons.

This three-row, almost full-sized SUV is faster than my half-its-size Trans-Am, which has an engine more than twice the size – and which burns up at least a gallon of gas every 18 miles and does not have massaging seats. 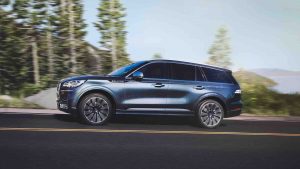 Lincoln decided to not to offer a truck-type 4WD system with the Aviator; the optional all-wheel-drive system does have a Slippery and Deep mode that adjusts the shift characteristics of the ten-speed automatic, as well as the traction/stability control system (to allow a bit more slip – so that you don’t get stuck) but this is an on-road SUV. 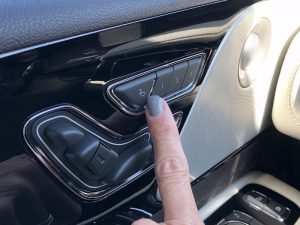 Being lower to the ground enhances stability and reduces wind/road noise as well as aerodynamic drag. And the AWD system – unlike most part-time 4WD systems – is designed to be used on-road, when it isn’t snowing or wet. In other words, it’s a handling advantage as well as a traction advantage.

This three-row, almost-full-size SUV corners better than my Trans-Am. I have a video of this but don’t dare publish it. Take my word for it, though. You can do things in this thing that – summoning Rutger Hauer voice from Blade Runner – you people wouldn’t believe.

There is also a parking advantage – vs. the Navigator (my Trans-Am wins this one). 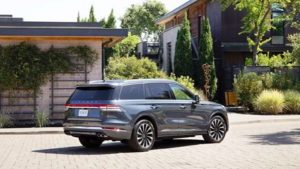 The Aviator is big – 199.3 inches long overall –  but not as big as the Navigator, which is 210 inches long overall. That extra margin of wiggle room may seem small on paper but can make all the difference when you’re trying to make a tight spot work. It also means you will probably be able to walk behind the Aviator when it’s parked in your garage whereas if you have a Navigator, you may have to open the garage door to get behind it.

A tighter-than-Navigator turning circle helps with U turns, too.

Overall, it is much more pleasant to drive – and not just because of its proportions. 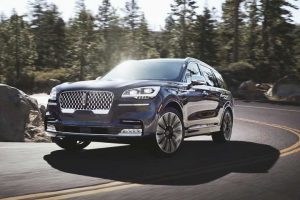 All the latest driver “assist” features are here – but they’re in the background and mostly mind their own business. The Aviator will automatically apply the brakes for you if you’re actually unconscious behind the wheel and about to hit something – but unlike so many other such systems, it won’t do so if it thinks you might hit something that’s 20 yards ahead of you.

The Lane Centering system doesn’t jerk the wheel in the direction you don’t want to go.

Even the loathsome ASS – the automated stop/start system which almost all new vehicles have as standard equipment – can be permanently turned off.

Scroll trough the settings to “driver assists” – and de-select the ASS. The engine will no longer automatically cut off every time the Aviator stops moving, which gets very annoying. 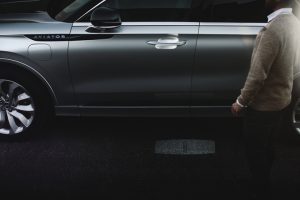 In many other new cars, you have to turn the auto-stop system off every time you go for a drive . . . if you don’t want the engine to stop at every red light.

And then there are those massaging seats! They almost make you want to stop. Every electric car should have them – to make the wait less annoying. Of course, they use electricity – which is a problem when you run out of charge.

No heat, either – which is created by electricity.

If you haven’t got any, it’s going to get cold. 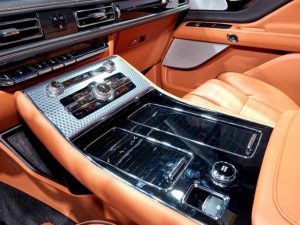 Like all the latest Lincolns, the Aviator has a cool, confident appearance. As opposed to the John Gotti appearance some others have. This is a welcome return to a past when luxury was synonymous with class rather than flash.

Lincoln says the Aviator is mid-sized and that’s technically true – but it’s very close to being full-sized where it matters. 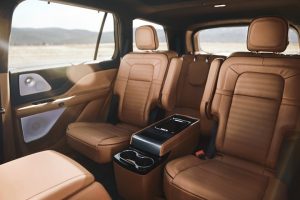 Three rows – and as much room in the first two as in the full-sized Navigator. More front-seat legroom, actually (43 inches vs. 41.8 in its bigger brother). And an easier-to-access third row, because of the Aviator’s lower step-in height.

Available Aviator amenities include four-zone climate control, an Elements Package with heated windshield wipers and an exceptional 28 speaker Revel ultra-premium audio system. You can also get a min-console for the second row, along with power-folding captain’s chairs. 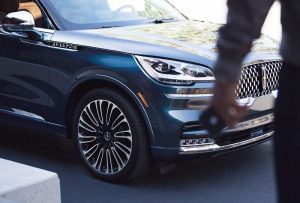 Standard amenities include three-zone climate control, a very good 10-speaker audio rig and a couple of uniquely Lincoln features, including a door-mounted keypad entry system, which Lincoln has been offering since the ’80s and which makes it almost impossible to lock yourself out of your Lincoln. Just tap you code – and the doors unlock.

And from the inside, you unlock the doors by lightly touching a button. No handles to  . .. manhandle.

Or, use your smartphone to get in – and drive – without touching anything. 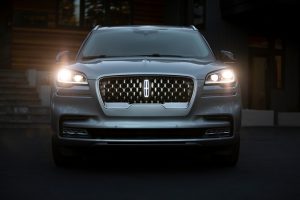 The one thing that’s very not-retro about the Aviator – and everything else that’s new – is the wafer-thin metal used for the hood and body panels. And all the plastic – front and rear.

It’s an irony of our era that new vehicles are very safe – and very fragile. It is easy to incur massive damage – not to the people inside but to the metal (and plastic) outside. A 1963 Continental that tapped the car ahead might have needed to have its bumper pulled out and polished. Do the same in a new vehicle – not just the Aviator – and you might need a new front end. 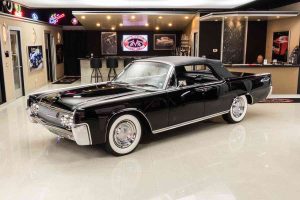 The crashworthiness is built into the structure – the parts you can’t see. The parts you can see – fenders, hood, those plastic front and rear clips – are designed to offer no structural resistance at all. They are purely cosmetic – and made to be as light as possible, to make up for the weight of the structural parts necessary to make the vehicle crashworthy while also keeping it fuel efficient – to comply with the conflicting requirements of federal mandatory MPG minimums (also the reason for ASS, which no one buying vehicles asked for). 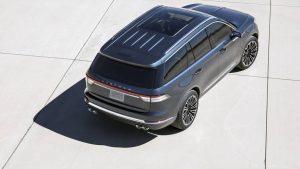 The government’s MPG mandates “save you money” – on fuel. But cost you a fortune when you have a fender-bender. And even if you don’t – because you might. Which is the calculation insurance companies make when they issue policies. What it will cost to fix – or replace – is reflected in what you pay, even if you never have to get it fixed.

The only mistake Lincoln may have made here is making the Aviator more appealing in many ways – and much less expensive – than its top-of-the-line SUV.