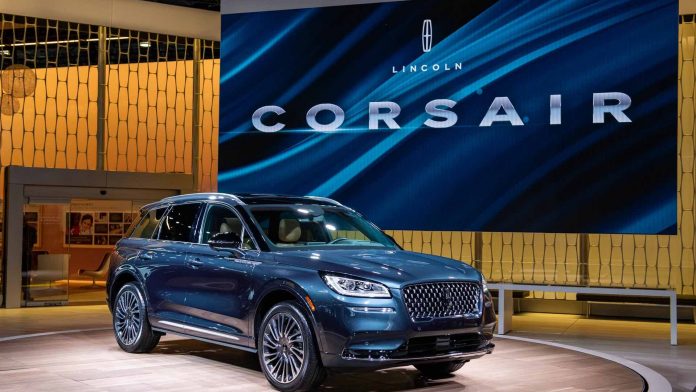 The Ford Escape is one of the best-selling compact-sized crossovers on the market. But what if you’d like an Escape with a bit more exclusivity  . . . and a lot more power?

Lincoln’s got you covered.

The Corsair is an upscaled version of the Ford Escape – sold under the Lincoln label. Both models share a common basic platform, or underlying chassis – but the Lincoln version picks up where Ford leaves off. 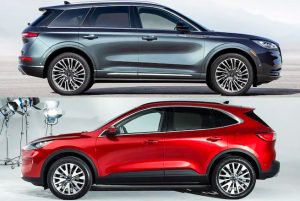 You can also get it with an automatically adjusting suspension, Perfect Position massaging seats, a 12-inch flatscreen main instrument panel, an outstanding 14-speaker Revel ultra-premium audio system and the ability to use your phone as a key – features not available in the Escape.

Prices start at $35,945 for the base trim with a 250 horsepower 2.0 liter turbocharged four cylinder engine, front-wheel-drive and an eight-speed automatic transmission. Equipped with the optional all-wheel-drive system, the prices rises to $38,145. 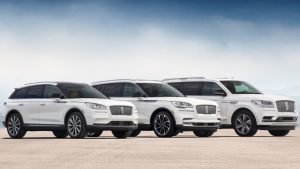 Models with the optional AWD system can be upgraded to a 2.3 liter turbocharged four cylinder engine that makes 280 horsepower for an additional $1,140.

A hybrid version is on deck for next spring.

The Corsair replaces the MKC as Lincoln’s entry-level crossover.

Also new is Lincoln’s decision to give its vehicles names again – rather than numbers and letters. Continental, Aviator – and now, Corsair.

This is an interesting and pleasant shift in course back to what was once typical but no longer is. 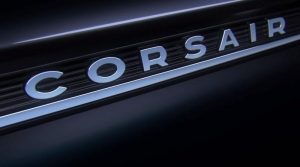 Extremely adjustable back seat; it can be reclined – and slides forward or backward through six inches of travel – opening up lots of legroom or cargo room.

If you don’t need all-wheel-drive, you don’t have to pay extra for it. The FWD version of the Corsair costs thousands less than AWD-only rivals like the Audi Q5 ($42,950 to start). 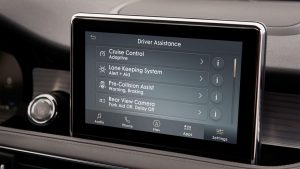 Top-gun engine is only available with AWD – which bumps up the Corsair’s price by several thousand bucks.

Base trims get the same LCD touchscreen as found in Ford Escape (but with Lincoln’s version of the Sync3 operating system).

A package of driver “assists” comes standard – even if you don’t require “assistance.”

The Corsair starts out with more power than some of its rivals offer – a 250 horsepower version of the 2.0 liter turbocharged four that’s the Escape’s strongest available engine. This engine outguns the Audi Q5’s standard – and only available – 2.0 liter, 248 horsepower engine and the BMW X3’s standard 2.0 liter (and also 248 hp) engine. 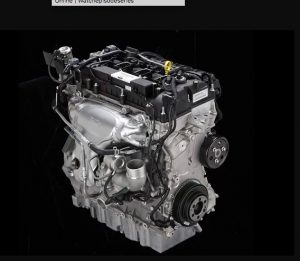 It’s also a simpler and so probably more long-term reliable engine vs. what’s under the hood of rivals like the just-redesigned (2020) Mercedes GLC, which comes standard with a 2.0 liter turbocharged four paired with a 48 volt electrical system/battery/motor in a “mild hybrid” configuration.

And even with all of that gear, the Benz’s uber-complicated drivetrain still conjures only 255 horsepower.

If you want more power – for a lot less money than rivals charge for an upgrade – the Lincoln can be ordered with a larger (and also turbocharged) 2.3 liter engine that makes 280 horsepower and 310 ft.-lbs. of torque. This engine is also paired with the eight speed automatic that’s standard with the 2.0 liter engine – but is offered only with AWD. 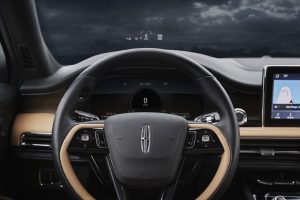 This does add a few thousand bucks to the Corsair’s price, but it’s not price-gouging. Check out what the Corsair so equipped costs vs. the X3 and GLC with their optional engines.

Not just of the tires, either.

Almost 300 horsepower (and more than 300 ft.-lbs. of torque) is a lot of power to put through the front wheels only; which wheels must – at the same time in a FWD car – deal with steering the thing. It’s double duty – and can lead to problems such as torque steer (extremely unseemly in a luxury vehicle) in addition to warranty problems, when stuff breaks. 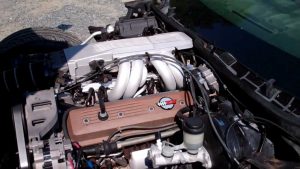 Either way, the horsepower being extracted from these little engines is pretty spectacular – almost magical. Any Gen X people (and older) reading this will recall when 250-280 horsepower was a lot of horsepower . . . for a V8 around 5.7 liters (as in the circa 1986 Corvette, equipped with a Tuned Port Injection 5.7 liter V8 that only made 235 hp).

So is the mileage – given the power. 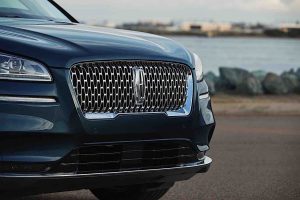 Official EPA numbers for the 2020 Corsair weren’t available when this review was written in mid-summer, but should be better than the old MKC’s (which used a slightly less powerful version of the 2.0 liter engine) numbers, which were 20 city, 27 highway – if only because the Corsair has that new eight-speed automatic (with multiple overdrive gearing) vs. the MKC’s less-leverage-advantaged six-speed transmission.

Either way, the little engine uses less gas . . . if you can resist the temptation to use the power. 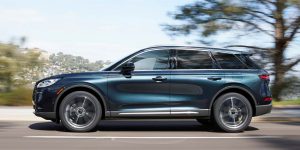 Even with its base engine, the Corsair is quick – but it’s much quicker with its optional 2.3 liter engine, which is basically the same engine previously used in the high-performance Focus RS and in the current Mustang – but packaged more discreetly in the elegant and luxurious-looking Corsair.

Which will surprise those not expecting it. 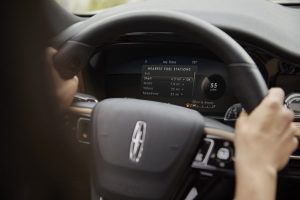 But it’s well worth the weight.

In addition to the quiet, there’s additional heft. Not that the Escape feels tinny or cheap. The Lincoln just feels more substantial, as it should.

And it has the power to overcome its heft, whether you stick with the standard 2.0 liter engine or the optional 2.3 liter engine.

Equipped with the latter engine, this luxury crossover SUV is quicker to 60 than a mid-’80s Corvette. That’s a measure of how far we’ve come – as well as how fast. 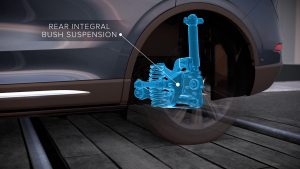 The Corsair’s ride is also noticeably smoother than a mid-’80s Corvette, as well as the Escape’s – especially with the optional adjustable suspension. But even without, due to a different rear suspension with isolator bushings and such.

Visibility is generally good – especially the rear third-quarter side view – because the Corsair’s glass doesn’t winnow into a slit – as is common styling practice.

As it does in the Escape.

The height of the Corsair’s last glass panel – the one closet to the rear liftgate – is nearly the same height as the driver/passenger side glass. It is much higher than the Escape’s. This also makes the Corsair look longer than the Escape, even though both have about the same overall footprint. 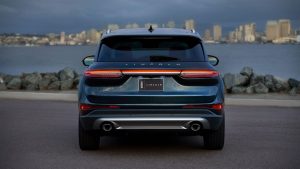 You may – or may not – like the fact that Lincoln equips every Corsair with a roster of driver “assist” technology, including standard automated emergency braking, which sometimes brakes when it really isn’t an emergency but the system thinks you’re too close for its comfort.

This can happen when you’re threading the needle through traffic – or when a car ahead is slowing to turn off the road and you know that car will be out of the way by the time you get to where it is – but the system doesn’t and gets upset because you’re not at least feathering the brake pedal. 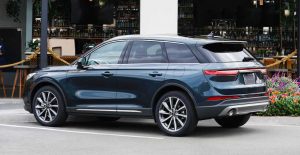 Crossovers – whether bread-and-butter or luxury-branded – are fundamentally about versatility. The Corsair’s reclining/sliding rear seats are exceptionally so – opening up almost 40 inches of backseat legroom (enormous for a compact-sized crossover) or allowing the cargo area to be expanded to almost 58 cubic feet.

The seats can also be adjusted individually, making for even more versatility. 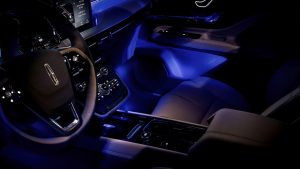 The Corsair is very luxurious, too – especially for the price. Massaging seats are still generally a feature you’ll find only in vehicles twice or more the Corsair’s MSRP. These are arguably among the greatest perks of owning a luxury-brand car since almost every car now comes with most of the things which used to define a luxury car, such as power windows/locks/cruise and climate control AC.

But they are still very rare, even among luxury cars – at least, among luxury cars at the Corsair’s price point. The fact that you can get them gives it a substantive advantage over its more expensive immediate rivals – many of which that don’t offer them. 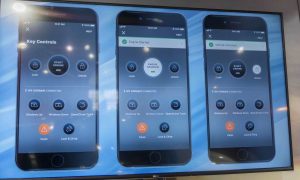 Or, use your phone to unlock (and lock) the doors – and start the engine and a dozen other things – from a distance.

The Corsair’s styling was paid a lot attention; it is several notches up from the usual nondescript and the obviously badge-engineered.

Almost none of the exterior panels interchange with its Ford-badged sibling – and inside, you’ll find a cabin that bears almost no signs of common lineage – with the one exception of the base trim’s touchscreen, which can be replaced with a larger/non-Escape touchscreen.

Otherwise, it’s all Lincoln – and the theme is in keeping with Lincoln’s best traditions. 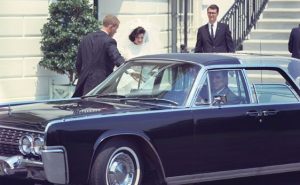 The Corsair comes off as modern and smart looking – but not trying too hard. Like Jacqueline Kennedy, back in the day.

The center console is low and long; the center stack is actually a shelf that floats gracefully out over the center console. It’s also at keyboard angle – which makes ergonomic sense, in addition to being a very graceful touch. It’s at a natural angle relative to your right hand; put another way, you don’t have to angle your hand unnaturally to adjust the temperature or fan settings.

Above the AC/climate control buttons are the shifter buttons – Park, Reverse, Neutral and Drive are engaged by selecting the button for each, a thematically Lincoln and functionally sensible way to get things going. There is more tactile feedback and it’s easier to know – at a glance – exactly which gear you’re selecting.

It’s not with toggles and knobs. 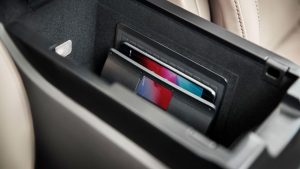 An interesting feature the Corsair shares with the Escape is that its optional AWD system can be disconnected when the extra traction of all four wheels being powered isn’t needed. This should improve fuel economy vs. the typical always-on AWD system – and reduce wear and tear over time, which ought to reduce long-term maintenance costs as well.

WiFi is standard but wireless charging is somewhat oddly optional. Lincoln could and probably should have made this feature a standard feature given that the Corsair is a luxury vehicle and being able to charge a cell phone wirelessly is becoming an expected feature in cars, period – or will, within the next year or two.

On the other hand, Lincoln gives you a much better standard warranty than Ford: Four years or 50,000 miles vs. three years or 36,000 miles for the Escape.

It’s no easy thing to stand out in this class.