Lincoln used to be right there with Cadillac as one of the top luxury car brands on the market.

Fast forward to 2011 and Lincoln’s hardly even got its foot in the luxury car door anymore – the result of a series of missteps and stumbles (Mark VIII, LS sedan), also-rans (Continental) and belly flops (Blackwood, Mark LT).

Lincoln has become Ford’s Buick – a nice but not-quite-top-of-the-line brand. Instead of going head to head against Caddy (and Audi, BMW, Lexus and the rest of them) Lincoln seems to be targeting near-luxury stuff like – you guessed it – Buick.

Of course, that means Ford doesn’t really have a premium brand anymore.

And that could be a real problem for Lincoln – and cars like the 2011 MKS.

The MKS is a large luxury sedan. It comes in both front-wheel-drive and AWD versions and is powered either a naturally aspirated 3.7 liter V-6 or a twin-turbo 3.5 liter “EcoBoost” V-6.

Competition includes the Buick Lucerne and – maybe, if you overlook a few things – AWD-equipped luxury cars like the Audi A6 and Acura RL, among others.

Calming lack of excess techno-junk. You don’t need to spend days reading manuals to understand how to operate the gear shifter or how the stereo controls work.

EcoBoost 3.5 liter V-6 delivers great performance and better fuel efficiency than base 3.7 liter V-6. It’s also stronger than the engines used in the Acura RL and Audi A6.

Much more available power/performance than you get in a Buick Lucerne – and that includes the V-8 Super version.

Available AWD (Lucerne is FWD only).

Mediocre acceleration with standard 3.7 liter engine – along with hearty appetite for gas.

Pricey for what you get (and don’t get).

So equipped, the MKS takes about 7.5-7.7 seconds to make it to 60 mph, which is neither especially quick nor particularly slow. It’s solidly average.

AWD-equipped versions do about 1 MPG worse on both counts.

The optional MKS engine is a twin-turbo 3.5 liter V-6 that’s rated at 355 hp. It also comes with the six-speed automatic.

AWD is mandatory with this engine.

Acceleration much-improved with this engine (0-60 takes about 6.8 seconds) and even better – there’s no fuel economy penalty to pay. The EcoBoost-equipped MKS (even with AWD) pulls down 17 city, 25 highway – better gas mileage than the FWD MKS with the much less powerful 3.7 liter engine.

The only fly in this pie is the EcoBoost V-6 expects to be fed premium unleaded while the base 3.7 liter engine runs fine on regular.

The MKS is pretty much the only $40k luxury car on the market that’s still FWD in its standard-issue form.

When it first came out two years ago, it was the only full-size luxury car in that price range that was offered only with FWD.

FWD does have several advantages, of course. It allows for better packaging of the engine/transmission/axle assemblies – which usually gives more interior space since most of the car’s drivetrain is up front rather than spread out along the length of the floorpan. You usually have better traction in the rain and snow, too – relative to a RWD car.

The downside is that FWD cars don’t handle as well under high-speed loading especially – because they’re nose-heavy – and because the front wheels are tasked with both steering and putting the engine’s power to the ground.

It’s not that it handles poorly. There’s some body lean, but it’s not nautical – and the steering tracks nicely with the road. It’s just not a BMW (or even a Cadillac). But it is an easy car to drive and it has a nice, “big car feel” to it. Personally, I like it. And 20 or so years ago, when “luxury” meant “soft, quiet and smooth,” the MKS would fit the bill for nine out of 10 luxury car buyers. The 50-plus set that typically bought a luxury sedan wasn’t into W-rated 150 mph low-aspect ratio tires, trail-braking or apex-taking. They just wanted a four-wheeled refuge from the outside world.

If that’s you, the FWD MKS won’t disappoint.

Except, of course, that you can buy a very similar car in the form of the Buick Lucerne for about $11k less. It’s true the Buick’s got less horsepower (a 3.9 liter, 227 hp V-6 is standard) but the typical buyer is probably not going to sweat that.

But that $11k price gap? That’s something you can’t help noticing.

The AWD version of the MKS with the powerful EcoBoost engine offers quicker acceleration and much better handling on dry roads as well as in the rain/snow than the FWD-only Lucerne.

Almost $50,000 for an MKS is as hard to swallow as a wheelbarrow full of pig knuckles when you shop around a bit more and discover that $46,830 could buy you something like the outstanding AWD Acura RL – or, for just a bit more ($50,200) an Audi A6 Quattro.

$50k is for the MKS is seriously pushing it.

If this car had a price tag around $44k, it’d be a different story.

As it is, I think Lincoln’s got a problem on its hands.

No one notices the MKS – which is bad news for a car with luxury pretensions (and price).

Buick can get away with it because Buick isn’t a top-of-the-line car. It’s a car for people who don’t want a top-of-the-line car and everything that comes with it, including the “I make more money than you do” styling. Buick buyers want discreet as much as they want climate control AC, nice leather and wood trim inserts.

The problem for Lincoln is that it’s supposed to be Ford’s top-of-the-line offering. Mercury (RIP) was Ford’s better-than-Ford (but not-quite-Lincoln) brand.

Maybe they should change the name?

Another problem I found with the car was functional: There’s surprisingly limited rear seat head and leg room – especially for a car this size. Those over six feet will find not much space to spare between the top of their head and the roof’s padding, especially toward the sides – and especially if the car has the optionally available sunroof. Taller occupants’ knees may brush up against the front seatbacks, too. It’s serviceable – but more cramped than I would have expected for a large luxury car.

Back seat occupants do get their own dual-stage bun-warmers, but there are no secondary climate or audio controls. The absence of these two features – which are commonplace nowadays even in $30k cars – is a big negative for the MKS.

The MKS is also has some cool/unique features such as a capless fuel filling system and the Lincoln-trademark keypad entry system – which can be a very nice thing to have if you accidently lock yourself out of the car.

Another MKS feature that’s kind of unusual is the optionally available two-section power sunroof – one for the front, one for the back. Each section can be opened or closed individually or both together, as you prefer.

Aside from some bland-looking plastics and leather, the MKS seems to be a solidly built (and nicely equipped) car. Base models get 18-inch wheels, rain-sensing wipers, power tilt/telescoping steering wheel, heated and cooled driver and front seat passenger seats, satellite radio and Ford’s Sync multimedia system, which lets you do things like operate the stereo or make a phone call by voice command.

The main issue is not the car as much as the image of Lincoln – which right now isn’t so hot. The MKS is likely to depreciate faster (and harder) than other luxury brand cars – a major consideration if you lease or trade-in cars every 3-5 years or so.

The other problem is that you can get more or less the same car – with more power and for a lot less money (about $37k) in the form of the 2011 Ford Taurus SHO. When the MKS came out in 2008 it could lay claim to being a Lincoln exclusive. But when Ford brought back the Taurus, it used the same platform as the MKS, as well as the same EcoBoost 3.5 liter V-6. Which means the MKS is now (more or less) a tarted-up Taurus.

If you got real luxury brand status by purchasing the MKS, it wouldn’t be such a big deal. But given Lincoln’s second-tier status, paying $40-$50k for a badge-engineered Taurus is going to be a tough sell, I suspect.

It’s a decent car – but not $40k (let alone $50k) decent. For that kind of money, a buyer has a right to expect excellence as well as exclusivity.

I’d rather spend $29k on the very nice Lucerne and call it a day. 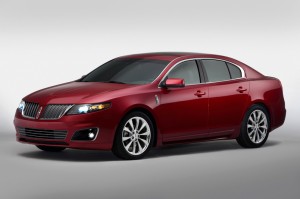 What Not To Do on Selection Day