Nowadays, all the really big sedans are foreign-made: Bentleys, Rolls-Royces, Daimler Maybachs. It is a sign of the decline of the once-magnificent American Land Yacht, whose sole surviving exemplar as of 2010 is the Lincoln Town Car – a mere middleweight by the standards that once defined “full-size.”

But once upon a time, wreath-and-crested mega-sedans ruled the roads. Of these, perhaps the best-known (and longest lived) is the Sedan deVille, sister ship of the Coupe deVille, which lasted from its conception in the mid-1950s more or less intact through 1984.

Like the coupe, the Sedan deVille was originally marketed as a high-trim version of the Series 62 and shared the 62’s wheelbase, basic chassis and most drivetrain components – including, initially, the 331 and 365 cubic inch V-8s.

Cadillac placed it just under the mighty Fleetwood sedan, which at that time was a virtual custom-built exotic.

Over the ensuing years – and six generations of restyles and redesigns – the deVille sedan would become a common sight on American roads and a visible symbol of American upper middle class affluence. A deVille was, in its day, the equivalent of an Escalade EXT – only less ridiculous. After all, it was a road car – not an ersatz “four by four” fitted with the engineering equivalent of mechanical cod pieces in the form of boastful but never (or rarely) used off-road equipment.

The Sedan deVille boasted room for three abreast in each of its two rows of crushed velour bench seats, a trunk big enough to serve as a hot tub for two and – during its prime years – the column-shifted wonderfulness of seven and eight liter V-8s feeding hungrily but quietly through 800 CFM Rochester Quadrajets, with linebacker-like torque sufficient to raise the prow two or three inches above the front whitewalls and hurling its bulk forward.

Probably the most impressive of the breed are the ’71-’76 versions, which were the biggest, offered the largest engines – including the 8.2 liter, 500 cubic incher – the largest displacement V-8 Cadillac ever made. Seeing one of these beasts rolling up behind you in the rearview mirror could be unsettling. The four round headlights stared you down like the eyes of a Great White, with the gaping grille very effectively reminding you of the predator’s glistening and razor sharp teeth. Two hundred pound chrome bumpers with battering ram vertical bumperettes promised devastating results to any who dared joust with one – except perhaps the owner of another deVille. These cars, at their high tide (1975-’76) measured 231 inches long and weighed more than 5,100 pounds – without driver or passengers. With four people on board and a few things in the trunk, 6,000 pounds of mass was brought to bear – commercial vehicle territory by modern downsized standards.

Naturally, things this large were destined not to live long lives. In ’77, Cadillac chopped nearly a foot of length and an astonishing 1,000 pounds off the flanks of the Sedan deVille. This version – which would continue through 1984, nonetheless actually boasted a slightly larger passenger compartment and trunk. Caddy designers simply reduced the front and rear overhangs to achieve the smaller overall profile. These latter-day deVilles were more boxy and stodgy than their predecessors but did achieve a certain notoriety as pimpmobile fodder, as well as conveyances for the well-heeled senior citizen set. They were also among the first of Cadillac’s modern cars to benefit from the new overdrive automatic transmissions that became available in 1981.

Scads of these were built, too.

From ’77-’79, annual sales always tickled six figures. It was only in 1980 that things began to really slide – perhaps because of serial disasters under the hood, ranging from (egads!) the first modern use of a V-6 engine in a full-size Cadillac to the now-infamous diesel 350 that poisoned American buyers on this type of engine for decades to come. The big car’s handsome shell remained, but the guts had become utterly gutless.

Things drifted along through ’84 – after which the deVille became a front-wheel-drive compact unworthy of the wreath and crest. This lasted until the ’94 model year, when a larger, but still FWD – and oddly proportioned – deVille made a final try at a comeback. But as with most such attempts, you can’t go back. The final, trickled-out remnant found employment as government staff cars ad funeral home stiffie wagons.

When the last of them were made in ’99, few even noticed the passing – or shed at tear at the loss. The real deVille had already been dead for 15 years.

* The French appellation, “deVille” loosely translates as “of the town.”

* Sedan deVille offered one of the first factory-installed air bags systems in 1974. The option was not popular, however, and only lasted two years

* A d’Elegance appearance package made also made its debut for 1974 and included crushed velour seat covers, thick pile carpeting and other trim upgrades. This package lasted much longer than the air bags, all the way through 1984 when the last of the traditional Sedan deVilles were built.

* 1977 was the first year that throttle body fuel injection was offered in place of a carburetor. 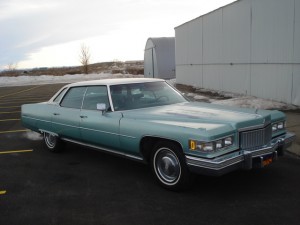