Seasonal riding is a fact of life for many motorcyclists. Come fall – and cold weather – many riders hang up their leathers and park their bikes for the duration. It might be three or even four months before it’s time to throw a leg over again. But we’re required to carry year-round insurance, regardless – which is not unlike being made to pay for a meal you never eat, or a service never received.

Does it make sense? Is it reasonable?

The law requiring year-round coverage is based, like so many modern American laws, not one what we as individuals have done but on what some other (often theoretical) individual – less responsible, less honest than we – might do.

Just like gun control laws that deny firearms to people who have never misused one because some other idiot somewhere might – responsible riders who park their bikes for the season are forced to pay for insurance coverage they don’t need because it’s possible that some other person would abuse the “loophole” (if it existed).

It doesn’t occur to the people of this mindset that it would be fairer to punish the people who actually do abuse a trust or privilege rather than treat us all as if we’re offenders before we ever actually offend.

It also doesn’t occur to them that, as with gun control laws, mandatory insurance laws are mostly obeyed by the people you don’t need to worry about anyhow. And conversely, the ones you do need to worry about are precisely the ones least likely to concern themselves with any law that’s posted – whether it forbids them to carry firearms or demands that they purchase insurance.

It’s a farce, though of course the joke’s on us.

We’re forced to pay for things we don’t need, like off-season insurance. But the goon who has no respect for laws – mandatory insurance and otherwise – still gets to do as he pleases, with minimal repercussions.

Sure, there are punishments for running around without insurance. But they are only a worry to people with something to lose; you know – responsible people who already obey the laws and who are thus by definition not the problem. The prospect of having one’s driving privileges taken away, for example, is a daunting thing to a solid citizen. But the welfare-living meth-head riding around on his (probably stolen) bike isn’t worried. Why should he be? What’s the worst that can happen? He has no money – other than his EBT card. He’s got no assets. He doesn’t care about his “record” – and if he goes to jail for a few days, hey, it’s free room and board.

He’ll just keep on keepin’ on.

What it really comes down to, of course, is money. Das geld, as they say in Germany. And we taxpaying suckers are the living, breathing geldscheissers (http://www.trash.de/product_images/i…_shirt_big.jpg) … the hapless patsies who exist to produce.

Oh, it’s always dressed up in high-sounding language; in this case, it’s all about “safety.” Mandatory all-year coverage laws prevent all sorts of mayhem – even though they don’t and no one ever provides actual proof to the contrary. It’s just taken for granted that passing a law necessarily achieves the stated purpose, even when it doesn’t.

Gun control advocates in DC never waver in their support for existing laws prohibiting firearms to the law-abiding even as the bloody evidence mounts all around them that criminal thugs don’t care much about laws that say No Guns. And people who demand that every motorcycle rider carry insurance coverage all year long, even though many riders don’t take their bikes out for months on end during the winter, don’t seem to care that they’re making those folks pay for coverage they don’t need on the basis of what some other ne’er-do-well might do if the leash was loosened a bit.

So the world turns.

If there weren’t any money in it, my guess is the situation might be different. 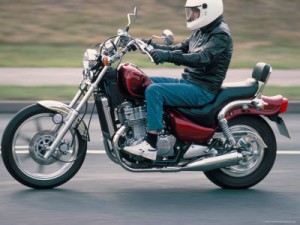 Freedom on the Roads