Many drivers are unaware that state DMVs now assign “points” for more than just moving violations.

In Virginia and Maryland, for example one can get points – as well as a beefy fine – for violating carpool restrictions, or driving unbuckled.

The logic behind the points system up to now has been that it provides an objective means of ranking drivers according to their propensity to drive safely – or not. Various moving violations that enhance the risk of an accident – for example, running a red light – cause a certain number of demerit points to be assigned  to that driver’s record. Accumulate too many points within a given period of time – the limit is usually 12-15 or so within a calendar year – and the DMV can suspend or revoke the offender’s license.

Insurance companies use the number of points on a driver’s DMV record to adjust insurance rates up or down. The more points, the more you pay. Drivers with 12 points or more are often stuck in the so-called “SR-22” high-risk group that typically has to pay $2,000 or more annually for coverage.

Arguably, the points system has many flaws – the most glaring one being the assignment of demerit points for simple “speeding,” which often means you’re guilty of nothing more serious than running afoul of a speed trap, which may be no reflection on your competence or safety behind the wheel.

But at least up to now the general rule has been that the offense must involve a moving violation that could put others at risk.

Handing out points just because you haven’t got the mandatory number of bodies in your vehicle (HOV violation) turns that concept on its head. The person may be a scofflaw deserving of a fine. But his offense has got absolutely nothing to do with his driving. A multiple carpool lane violator could rack up a pile of points on his driver’s record – which to any insurance agent or DMV clerk would look much the same as the record of a habitual red light runner or DWI offender.

Is that reasonable – or ridiculous?

Seat belt laws are a similar case in point. It’s no longer sufficient merely to issue fines to those who refuse (for whatever reason) to buckle up. Most state governments have passed legislation that imposes demerit points in addition to the fines, simply for failing to wear a seatbelt.

There have even been calls to issue tickets to passengers who aren’t buckled.

But driving while unbuckled is no more a threat to others than is baring too much skin – or wearing tacky clothes. Maybe it’s not the best idea, but does it rise to the level of a moving violation?

What it ultimately comes down to is whether we want a government – or a Salvation Army cajoling us to adopt certain “good for us” behaviors. The old-school outlook on government is that government’s job is to protect citizens from other citizens – not from ourselves. But more and more, the government is stepping in to cajole us to adopt certain behaviors and actions it thinks we should, even though these actions (whether it’s not wearing a seatbelt or smoking cigarettes) don’t directly affect anyone else.

On a purely practical level, too, the use of big sticks such as the DMV points system to hencpeck and pester people over matters peripheral to their driving muddies the waters as effectively as a Mississippi paddle-wheeler. If “offenses” such as not having the proper number of warm bodies in one’s car are thrown in with genuinely dangerous actions such as red light-running and reckless driving, the DMV points system becomes less and less a barometer of safe driving and more and more an instrument of social coercion.

Maybe that’s what it’s all about, in the final analysis. There’s big money at stake – because with a greater variety of offenses on the books that can result in “bad driving records,” our friends in the insurance industry have an easier time jacking up our rates. And with more pretexts for harassment by the state, our friends in government will have more tools available to extract money from our hides via traffic tickets and court costs.

That seems to be the the lay of the land. What do you think? 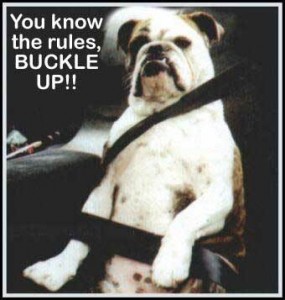