Since at least the late 1970s, most people came to accept that if you wanted a really good small car, you had to shop for a Japanese small car. The stuff GM and Ford and Chrysler were stamping out often wasn’t even competitive.

Junkyards all over America are piled high with the hulks of necrotic Neons, crapped-out Cavaliers and Escorts that no longer Escort anyone anywhere. Meanwhile, 1990s-vintage Corollas and Civics are common sights everywhere you go – and often still in use as daily drivers.

That’s why the Japanese are number one when it comes to small, value-priced cars.

Ford and GM are trying to get back in the game with new models like the 2011 Chevy Cruze and Ford Fiesta, subject of this review. (Chrysler’s still trying to get back on its feet – and won’t have a new entrant of its own for at least another year.)

The Fiesta’s definitely a player.

Whether it has the legs to go the distance remains to be seen. But there’s no doubt that for the first time in a generation, one of the best small cars on the market could be an American small car.

The Fiesta is a compact-sized, economy-minded sedan/five-door hatchback sedan. Prices begin at $13,320 for a base S trim sedan; the range-topping SES hatchback sedan starts at $17,120.

It competes in the white-hot under $15k small car market against 900 pound gorillas like the best-selling Toyota Corolla and the number-two best selling Honda Civic – as well as Blue Light Specials such as the Toyota Yaris and Nissan Versa 1.6, among others.

It shares some DNA with its corporate cousin, the 2011 Mazda2, but it is larger outside, has a more powerful engine and more up-to-date-technology and equipment, including an available dual-clutch six-speed automatic (vs. the Mazda’s ancient four-speed conventional automatic) and Sync voice-recognition for controlling the car’s media and entertainment systems.

The Fiesta is an all-new (for the U.S. market) model for Ford, slotting just under the Focus in size and price. It is basically the same car Ford sells in Europe, with minor styling and trim changes for the American market.

Low cost but not a stripped down transportation module like the Toyota Yaris or Nissan Versa 1.6 liter.

All trims come standard with AC and in general, more features and equipment than higher priced competitors like segment-leading Toyota Corolla (Base price $15450) and Honda Civic sedan (base price $15,655).

Two-piece outside rearview mirrors can be confusing.

Just one engine choice – with less power than several competitors.

All Fiestas come equipped with a 1.6 liter DOHC four-cylinder engine rated at 120 hp. This engine can be teamed with either the standard five-speed manual transmission or, optionally, a six-speed dual-clutch automatic.

The Fiesta’s dual clutch automatic transmission is state-of-the-art technology, combining the convenience and ease-of-use of a conventional automatic with the superior fuel-economy potential of a manual transmission. It is also an unusual feature to find in a car at this price point – and it accounts for the Fiesta’s best-in-class 30 MPG city and 40 MPG highway fuel economy – which is 5 MPGs better than even the much smaller, considerably lighter and far less powerful Mazda2 delivers.

Zero to 60 runs take about 9.5-9.6 seconds for manual-equipped Fiestas – mid-pack for the segment.

All Fiestas are front wheel drive.

The Fiesta’s got a great ride, first of all. Very possibly the best ride in its class.

It has the lead ingot feel of a 4,000 pounder in 2,500 pound package. Dips and potholes are just absorbed by the car’s chassis. You hardly feel them – and there’s no bottoming out or that nautical parabolic up-and-downing after you drive over road irregularities you sometimes get in over-springy small cars.

The Fiesta also never feels small or out of its depth – even on the highway running 80-plus (which I did for 400 miles). In some small cars, highway driving can be intimidating; there’s either not enough power to comfortably maintain the pace (well over 70 these days) or you’ve got to keep both hands on the wheel in a white-knucked death grip to avoid being blown into a ditch by the slipstream of a passing Peterbuilt.

But the Fiesta is at ease cruising along 75-80 mph, the engine humming along at about 3,000 rpm in fifth – with more to go if you need it. Models equipped with the six-speed automatic have more favorable gearing, so engine speed at high cruise is several hundred RPM lower. This makes the automatic-equipped version of the Fiesta feel even better at high speeds.

Either way, it’ll easily crack 90, 100 mph – and then some – which is more than plenty for American highway driving. Keep in mind that Ford designed this car for Europe first, so it was set up to handle sustained driving at speeds around 70-80 mph or even faster.

Off-the-line acceleration isn’t furious, but it is absolutely competent for just knocking around – which is what the Fiesta was born to do. The car feels quicker than it is, too, because the engine doesn’t sound awful when you rev it to five or six thousand RPMs as you row through the gears. In fact, it sounds and feels better at engine speeds of 3,000 RPM and above, when the engine hits its powerband and delivers its strongest pull.

Fiesta is the first American-brand economy car to make that cut.

Japanese small cars have been like this for years, which is one of the reasons why their small economy cars became such huge hits with buyers. Corollas and Civics may not have been road rockets or sexy to look at, but they always gave you the impression of rock-solid engineering; their engines didn’t sound like they were about to chuck pistons through the oil pan whenever you floored it – or send “magic fingers” vibrations through the steering wheel and shift lever.

My only quibble – and this is subjective – is with the Euro-style dual-piece outside rearview mirrors. There is a small “wide angle” section and a standard section. Few, if any, American cars have this layout and it can take some getting used to. Instead of just one image, you get two – in different perspectives (wide angle and standard view). It does – in theory – improve visibility but I’d rather have the old-style single piece mirrors – and my bet is many buyers will agree.

I also don’t like the super-aggressive Belt-Minder buzzer, which assaults you with a belligerent DING! DING! DING! if either you or your front-seat passenger haven’t “buckled up for safety” – even if you’re just rolling down the driveway to get the mail.

If I bought a Fiesta, the first thing I’d do before leaving the dealer’s lot is replace the two-piece mirrors with normal units – and then take an ice pick or large, flat-blad screwdriver to the buzzer.

The Fiesta has one thing in common with its Ford Family big brother, the Mustang: It’s a car that fits almost any demographic. It can be a young person’s car or an older person’s car; a man’s car or a woman’s car. It pretty much works for anyone – which you can’t say about the Corolla (frumpy librarian’s car) the Civic (young kid’s car) or the Yaris (poor person’s car).

It’s cute but not feminine; sporty but not too much.

It is small – but not flimsy or pathetic-looking.

I liked the straightforward gauge cluster and rotary-knob controls for the AC and heat. Some reviewers carp about Ford not offering GPS, which you can get as factory option in some competitors like the Civic. But the fact is factory GPS units have several big downsides, including the usually much higher up-front cost ($1,500-$2,000 being typical) and also the fact that they’re integral to the car. A good aftermarket GPS unit costs half to two-thirds less than a factory unit – and you can use it in other cars, or take it with you when traveling.

Space-wise, the Fiesta has about the same (or a bit more) front seat head and legroom as Corolla and Civic; but rear legroom (31.2 inches) is much tighter than in the Corolla (36.3 inches) and the Civic sedan (34.6 inches). The Fiesta squeezes out a bit more trunk space: 12.8 cubic feet vs 12 even for the Civic and 12.3 for the Corolla.

The Nissan Versa 1.6 has a larger interior – its chief virtue – but it’s a stripper with literally nothing, not even a radio, among its standard amenities.

Though much smaller outside (at just 155.5 inches overall, it is close to two feet stubbier than the 173.6 inch-long Fiesta) it has about the same front seat head and legroom – and more back seat legroom (34.8 inches). But some buyers may be put off by the Mazda’s clown-car size, while its disappointing gas mileage and dated four-speed automatic mar what is otherwise a very appealing little car.

Fiesta’s five-door hatcback sedan bodystyle doesn’t give you much more interior space than the standard sedan. If it’d been my call, I would have commissioned a hatchback wagon version of the Fiesta – which would have given it an edge over the Corolla and Civic insofar as utility/carrying ability – and made it competitive with big-inside small cars like the Honda Fit, Nissan Cube and Juke.

The Fiesta whomps all its competition on gas mileage, though – with a best-in-class 40 mpgs on the highway vs. the Corolla’s 35 mpgs and the Civic’s 34 mpgs. It even defeats the micro-car Yaris, which comes close to but doesn’t quite reach the 40 mpg mark.

If you want to, you can dress this thing up with some pretty swanky equipment, too – including pushbutton keyless ignition, voice-command multimedia/entertainent, multi-hue LED mood lighting (just like in Mustang) and heated leather seats.

Also available is a Super Fuel Economy Package that will probably get you over 40 mpgs on the highway, if you drive it right. The package cleans up the car’s aerodynamic profile by filling in the lower grille and bolted on underbody pans. Also included are super lightweight wheels fitted with low-rolling resistance tires, like the ones hybrids have.

It’s not official yet, but expect Ford to offer some kind of sport/performance version of the Fiesta by the 2012 model year; probably it’ll be available in spring/summer of 2011.

Judged by everything you can see/feel/touch and know right now, the Fiesta’s just as good as the best Japanese small cars now – possibly better. It matches them on refinement and attention to detail – and beats them on MPGs.

The only open question is how long-term solid the Fiesta will prove to be. And that we won’t know until these cars have been in service for at least 3-5 years. Still, the omens all look very good. There is no sign of cost-cutting or cheaping out anywhere that’s visible, anywhere you can feel.

The thing even comes standard with a knee airbag for the driver! That’s another class-exclusive or best-in-class standard.

The standard three-year/36,000 mile warranty could be better – but it’s the same as Honda and Toyota give you.

It costs about $1,500 less than the Big Kahunas in this segment, has equipment and technology most of them don’t even offer – and eats their lunch when it comes to fuel economy.

The South probably won’t rise again – but the American car industry (or at least Ford) sure looks like it might. 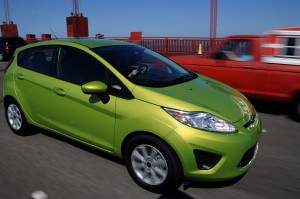