Here is something unusual:

The 2011 Audi A4 is one of just a small handful of $30k luxury sedans that comes standard with a four-cylinder engine.

It’s also the only one that doesn’t offer anything bigger.

Shouldn’t it be a problem for a $30k car to have less engine than many $25k cars?

Somehow, Audi gets away with it.

The A4 is a compact-sized luxury-sport sedan (and wagon) available with either front-wheel-drive or Quattro all-wheel-drive.

Prices start at $31,950 for the 2.0T with FWD and Continuously Variable (CVT) automatic transmission. The range-topping AWD-equipped Quattro wagon has a base price of $35,940.

Quattro models get a new eight-speed automatic transmission and a new Titanium Sport package is available for both sedans and wagons. It adds 19-inch wheels and piano black trim inserts. High Definition radio is bundled with the optional GPS system.

Or go with the CVT.

Superb value. The A4 has a lower price tag than features-equivalent competitors like the BMW 3 Series and Mercedes C300 – both of which start at nearly $33k for the base model.

Can’t get wagon with manual transmission.

AWD – and higher sticker price – is mandatory with wagon.

There is only one engine available in the A4 – 2.0 liter turbocharged and intercoooled four-cylinder rated at 211 hp. (A V-6 used to be optional but was dropped from the lineup last year.)

Despite having two fewer cylinders – and less rated horsepower – than some of its six cylinder equipped competitors, the four-cylinder A4 delivers comparable acceleration: 0-60 in about 6.4 seconds with the manual transmission. Quattro AWD versions with the new eight-speed automatic also pull down a very solid 21 MPGs city, 29 highway (31 highway with the manual six-speed).

The A4’s highway figure is a 4-5 mpg better than either the six-cylinder-powered Mercedes-Benz C300 with 4Matic AWD or the BMW 328i with xDrive AWD.

Credit for the A4’s six-cyinder-equivalent performance and superior (to the sixes) fuel economy is due in part to the use of direct injection technology, which more precisely meters fuel to the engine. The 2.0 liter engine’s turbocharger, meanwhile, provides on-demand power – giving you extra thrust when you ned to pull out into traffic or make a quick pass, but the rest of the time, letting you use less gas than would be the case with a larger, necessarily thirstier, six-cyinder engine.

The new eight-speed automatic helps, too. The tighter spacing in between gears – and deep overdrive ratio in “eighth” – is worth 1-2 MPGs compared with a six-speed automatic, says Audi.

Like most engines in the luxury car class, the 2.0 T prefers premium fuel. But it’s only recommended –  not required – so you can burn the cheaper stuff if you like without worrying about harming anything – other than losing some power and maybe an MPG or two.

Whether you like the A4’s turbocharged four more (or less) than the bigger six-cylinder engines that come standard in competitors like the BMW 3 and Benz C will depend to a great extent on what kind of driver you are. The turbo four pulls strongly, but compared with larger displacement/higher torque six-cylinder engines, the power comes on higher in the RPM range – which means revving the engine to get the turbo spooled up.

For the speedy-minded driver, this is no liability. It’s fun – especially in manual versions of the A4. The engine revs happily to its 7,000 RPM redline and the turbo boost gives you a nice push back in your seat as the rpms climb past 3,000.

It’s not fiercely quick  but it’s more lively and has more personality than some others in this segment – including the languid-feeling Benz C.

And it gets better gas mileage than just about any of them, too.

Speaking of which: Both the new eight-speed automatic and the six-speed manual have really deep overdrive gearing. So deep that on a level road you can maintain roughly 50 mph with the engine barely idling at just 1,500 RPM.

As far as handling: The A4 is, of course, built around a FWD layout (with AWD optional) while its primary competitors are built on rear-drive layouts (with AWD optional). The conventional wisdom is that RWD-based cars handle better since they’re naturally more balanced (the weight of the engine/transmission/drive axle isn’t all up front but spread out over the length of the car) and also because the wheels that steer the car aren’t the same pair that put the power down. It’s true, too – but with a caveat. The differences in handling behavior between a FWD-based car and a RWD-based car only begin to become noticeable if you are really moving. Maybe in the past when cars (whether RWD or FWD-based) had much lower limits and started to come unglued sooner and at lower (near-legal) speeds – the typical street driver would notice the different handling behavior of a FWD-based car vs. a RWD-based car. But today, the grip threshold (“limit,” as we say in the biz) of any sport-luxury car is so high you’ve got to be driving either seriously illegally or seriously recklessly to feel them out.

On a test track, ok – a RWD BMW or Benz will probably turn a quicker lap time than a FWD-based car like the A4. But does it matter on the street?

Maybe – if you drive on the street like you would on a track.

But if you don’t, the truth of it is that the FWD-based layout of the A4 is probably a better choice. You get better traction in wet and snow without having to upgrade to AWD and unless you have some high-performance training/track time under your belt, the handling characteristics of FWD are safer, too. If, for example, you enter a curve carrying too much speed, the front end of a FWD car will begin to plow toward the inside of the curve – and all the drive usually needs to do is back off the gas or brake a little and the car will straighten out. Under the same conditions, a RWD car’s tail may break loose abruptly and fishtail – which requires more experience, skill (and sometimes, nerves ) to deal with.

But I think the main draw of the A4 is that the FWD version is more tractable in all types of normal street driving than the RWD versions of the Benz C and BMW 3. Both of those cars, in their RWD forms, are not happy cars in wet/winter weather driving scenarios – pushing you (if you live in a winter weather area) to pony up for the much more expensive AWD-equipped versions. In the case of the Benz C with 4Matic, the price tag will be over $37k vs. $31,950 for the FWD A4 with CVT transmission.

The availability of a wagon version of the A4 adds versatility and also 51 cubic feet of total cargo capacity (rear seats folded) vs. 34 cubic feet (total, with second row seats down) for the sedan.

The A4 has a gorgeous interior, too. Soft suede, really nice leather. You feel fast-forwarded 10 or 20 years. Aircraft-like metal trim plates and red-backlit instruments add dash.

Bu the Multi Media Interface (MMI) control system is not the A4’s best feature. There’s a mouse-like input and multi-function buttons that in some cases require you to do two things to accomplish one thing. For example, you can’t just rotate a knob to increase the speed of the climate control’s fan. First you have to push a button to activate the fan function, then you can rotate a knob to adjust the fan. Same deal with the seat heaters.

The good news (for Audi) is that others cars in this segment have equally aggravating/overcomplicated control inputs – most notoriously the BMW’s horrendous iDrive. On the other hand, Lexus has shown it is possible to engineer a user-friendly system that is “high tech” but won’t make you want to put your fist through the dashboard. (At the time of this review, however, this new Lexus system is only offered in certain models like the RX350 crossover SUV and not in any Lexus cars that compete directly with the A4.)

The A4’s a sweet car – and even better it’s a pretty sweet deal. It’s not just that it has a substantially lower base price than competitors like the BMW 3 and the Benz C. It is comparably (or better) equipped than they are, despite having a lower MSRP.

Adding AWD only adds about $1,000 to the price, too – whereas some competitors charge several thousand to upgrade to AWD. 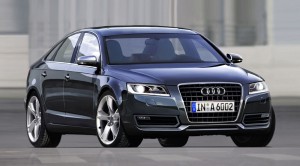 Other worthwhile mentions: The cruise control system is “adaptive,” meaning it automatically adjusts the car’s speed in relation to the ebb and flow of traffic – and also maintains the car’s set speed even on downhill stretches. A flaw with many of the non-adaptive cruise control systems on the market is that the car can go faster than the set speed when going downhill, forcing you to intervene and apply the brakes, which defeats the whole point of having cruise control.

Who says you need a six under the hood – or a $40k price tag – to qualify as a serious player in the entry-luxury sport sedan market?