Apparently, station wagons are not cool. And “crossovers” are becoming too commonplace.

So what do you call a new vehicle that’s based on an existing sedan and has most of the characteristics of a wagon that you don’t want to call a crossover?

Toyota says the five-passenger Venza is a “melding” of SUV and sport sedan – but not (yet another) “crossover.”

Awkward phraseology aside, the Venza’s pretty much a Camry wagon.

Not that there’s anything wrong with that… .

It shares the same basic underthings (chassis, suspension and engines) but the Venza’s got a hunkier-looking, wagonized body with significantly more cargo carrying space.

It can also be ordered with all-wheel-drive, a feature that’s not offered (for the moment) in its unacknowledged Camry cousin.

The Venza was introduced about a year ago as an all-new model for Toyota, so changes for the ’11 model year are incremental. The audio systems now include a USB port for MP3 players and Bluetooth wireless is available.

Can be had with more economical four-cylinder engine (both the Ford Edge and Accord Crosstour come standard with V-6 engines).

Optional AWD (not offered in Camry).

Four cylinder engines are making a comeback in larger cars – for good reason. It’s dawning on people that modern fours produce sufficient power (in most cases, twice the output of a typical four-cylinder engine from the late ’80s) for everyday driving, so why pay extra up front – and down the road – for a gas-hungry V-6 you may not really need?

In the Venza, the standard four-cylinder engine displaces 2.7 liters and produces 182 hp. This engine is a slightly larger, updated version of the current Camry’s standard 2.5 liter, 169 hp engine. (Expect the 2012 Camry to get the updated 2.7 liter engine.)

Gas mileage with this engine is 21 city, 29 highway – several ticks better than the Edge and Crosstour (19 city, 26 highway and 18 city, 27 highway respectively), both of which come standard with V-6 engines.

The Edge, however, can be ordered with a very potent 3.7 liter, 305 hp V-6, easily outgunning both the Venza and the Crosstour.

The Venza’s V-6, like its standand four-cylinder engine, comes paired with a six-speed automatic transmission.

All-wheel-drive is available (a feature the current Camry doesn’t offer at all) but you must upgrade to the V-6 equipped Venza to get it.

Four-cylinder Venzas are front-wheel-drive only.

Max towing capability is 3,500 pounds with the optional V-6.

The Venza comes equipped with some tall wheels (19 inchers are standard; 20s come with the V-6) and it sits about three inches higher off the ground than the Camry.

It is also more than three inches wider through the hips (75 inches vs. 71.7 inches). This gives it an almost-SUV-like driving position/feel – as well as a hunkier look than the wallflower Camry – even though both share exactly the same wheelbase (109.3 inches) and even though the Camry is actually slighty longer, nose to tail (189.2 inches vs. 189 inches).

That’s the “sporty” part of the Venza’s theme.

In actual driving, it behaves a lot like the Camry. Which is no slam – it’s just no BMW stalker, that’s all. It’s a very easy – and pleasant – car to drive, with almost one-finger electrically-boosted power steering, unusually cushy seats and a tomb-quiet ride.

In other words, the Venza’s designed for American tastes and driving habits – not European ones.

And that’s ok. We are, after all, Americans.

We get in, buckle up and go from “a” to “b” – at about the speed limit, usually. The images presented in TV ads of solitary cars drifting through tight radius s-turns with just the right backlighting and no cops in sight are just that – images based on a copyrighter’s appeal to your lizard brain; not the reality of day-to-day poking along.

And for this everyday reality, the Venza’s ideal. It even has an almost column-shifter for the six-speed automatic. Instead of the usual floor-mounted deal (where it takes up space and is vulnerable to coffee spills), the Venza’s shift lever is mounted up high on the center console, where it falls literally right to hand. There’s even an “s” (sport) mode that locks out overdrive and kicks the tranny down into fourth for more aggressive pull when you need to pass someone.

But Drive works just fine, too.

Toyota could have spiced things up a bit by offering a manual transmission option with the four-cylinder engine. A six-speed is available with the same basic engine in the ’11 Camry, so it probably could have been done – though it would have involved putting in a floor-mounted console – and that would likely have dialed up too much trouble and expense.

Besides, America is the land of cell phone gabblefests, Bluetooth, DVD navigation – and traffic. Fewer and fewer people are interested in shifting for themselves – or frankly, even paying much attention to the act of driving.

So it makes sense that Toyota decided to keep the Venza automatic-only.

The Venza’s more dramatic-looking than the Camry but not as out-there looking (and impractical) as the Crosstour.

It shares some of the styling themes common to today’s mid-large crossovers (oops, let that slip) such as a “fast” windshield, “chopped” looking roofline, etc. There’s also some Coke-bottle sculpting in the middle section that sexes things up – and the Cheshire Cat grille shape is kind of interesting, too.

It’s not as wild-looking as the Crosstour, but it’s definitely less ponderous and blocky-looking than out-of-the-closet crossover SUVS like the Ford Edge.

Functional aspects include the rear cargo area’s load height, which is actually lower than the Camry’s. This helps when you’re trying to lug heavy items on board.

Speaking of which, the Venza can swallow 70 cubic feet of whatever – vs. 14.5 cubic feet in the Camry.

This also smokes the Crosstour – which only has 51 cubic feet as a result of its sleeker (but much less practical) shape. The Venza also edges out the Edge – but just barely. The Ford has 69 cubic feet of cargo space.

I dunno about those huge ree-uhms, though. Yeah, 19 and 20-inch rims are popular right now. But you ought to check into tire (and wheel) replacement costs before you sign up. A 19 or 20-inch tire can cost $150-plus each and the wheel (if you bend one, easily done by rubbing up against a curb, for instance) can be two or three times that amount … easily.

Though it shares its platform with the Camry, the relationship is not immediately obvious. Not that that would be a bad thing. The Camry is an excellent everyday driver (and America’s best-selling mid-sized sedan for many years now, too). But the point is that Toyota didn’t just weld together a custom body and drape it on a Camry chassis. The Venza’s interior, for example, is unique to this model- and not just grafted in from the Camry with some different trim plates added here and there.

Another factor to consider is that Toyota dealers are probably more receptive to haggling right now than they’ve been in 20-plus years, due to this summer’s series of highly public recalls.

There have been no issues with the Venza, but the problems with other Toyota models gives you, the buyer, leverage. Odds are you can negotiate a deal on a new Venza for less than MSRP sticker – and that’s something few Toyota buyers could have dreamed about doing prior to this summer’s embarrassing recalls.

The Edge is sportier (in Sport form, with its 305 hp V-6) and the Crosstour’s slicker – but the Venza’s may be the most practical wagon of the bunch… even if Toyota won’t admit it is a wagon. 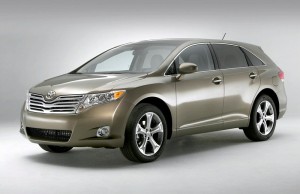