When the 2011 Sonata appeared in my driveway, shiny black and handsome-looking – I initially thought it was the Genesis, Hyundai’s top-of-the-line sedan.

It’s that easy to mistake the $19k (to start) Sonata for something a lot more expensive.

That’s just one measure of how far Hyundai has come since the Excel Era – a mere 20-something years ago.

If you’re shopping a mid-large family car, you must go see the Sonata.

It really is that good.

The Sonata is Hyundai’s “bread and butter” family car; a large (almost full-size) sedan that can carry five adults in comfort and not cost its owner more than about $26k, fully loaded.

The ’11 Sonata is a complete redesign; only the name carries over.

Impressive presence; looks as slick as George Clooney in a tux.

Much roomier up front than the Malibu; not nearly as dowdy as the Camry.

Some buyers may still want a V-6.

Your neighbors may assume you fell into some money.

The Sonata comes standard with a direct-injected, 2.4 liter four-cylinder that produces 198 hp (200 when equipped with the optional dual exhaust system).

All Sonatas are front-wheel-drive.

Hyundai took a reasoned gamble by deciding not to offer a V-6 in the Sonata.

On the one hand, many competitors (Malibu and Camry among them, as well as the Mazda6 and Ford Fusion) do offer V-6s. On the other, the fact is most mid-sized family sedans are ordered with the four (when available) rather than the V-6.

So, Hyundai split the difference.

The direct-injected, 198-200 hp four in the Sonata is considerably more powerful than the standard four-cyinder engines in direct competitors like the Malibu (2.4 liters, 169 hp) and Camry (2.5 liters, 169 hp). In those two, you almost have to buy the extra-cost V-6 to get adequate performance. But the Sonata’s four – whose output is roughly halfway between the Camry and Malibu’s base fours and their optional V-6s – delivers adequate performance (as well as much better fuel economy) right off the bat.

And at no extra cost.

The 2.4 liter pulls with enthusiasm, skirting the tachometer’s redline before each upshift (in automatic-equipped versions). It has no trouble at all keeping pace with the flow of traffic – or passing slower traffic. It’ll run 80-90 mph all day without straining and that is plenty fast enough for real-world driving on American roads.

Having the option of a clutch to play with is nice, too.

The Camry also offers a six-speed with its base four-cylinder engine, but the Sonata’s appx. 30 hp power advantage gives the driver a lot more to work with.

Ride quality is to the left of center – meaning, extremely plush. This is a softly-sprung car built to absorb the road; it does not like to be driven aggressively and will sway and lean if it is. But here again, Hyundai is being smart and catering to its prospective customers, not road-test journalists who think every car should be as firm riding as a BMW 3-Series and corner like a Porsche. There are millions of people who just want a pleasant, secure-feeling – and plush – family-mobile.

And the Sonata’s exactly that.

Just like its engine, the Sonata’s driving/handling characteristics fall in the middle between the more sport-oriented (but firmer riding) stuff out there, such as the Mazda6 and Honda Accord – and the completely flaccid-feeling Camry.

An SE/sport package is available (along with 18 inch wheels) but while high-speed handling improves, ride quality suffers. The Sonata does what it does best in non-sport format.

If its sporty you seek, you should probably shop Mazda or Honda; they do it better.

But no one’s doing plush as well as Hyundai is right now.

Speaking of comfort, check out the Sonata’s astounding 45.5 inches of front seat legroom and compare that to the Camry (41.7 inches) and Malibu (42.2).

But there’s a downside. That living-large front seat roominess comes at the expense of backseat passengers. There’s less rear seat legroom in the Sonata (34.6 inches) than in either the Malibu (37.6 inches) or the Camry (38.3 inches). Once again it’s a split the difference kind of deal. Hyundai is banking on most customers worrying more about the room up front than out back. And the room in back is still in line with the competition – and adequate for all but the largest (and tallest) adults.

The car’s nearly 17 cubic foot trunk is among the largest in the segment, too.

Where the Sonata really stands out, though, is its curb appeal. It is sleek and even dramatic (especially the side profile).

Not to mention all the “stuff” you can get in this thing for around $26k.

It is one of the best-kept secrets in the car business that the meaningful differences between a $50,000 “luxury” car and $20k-something cars like the new Sonata are slipping away. Go sit in the driver’s seat of this car – and then go sit in something that costs twice as much – and see for yourself.

People originally bought Hyundais because they were inexpensive; a new car alternative to a used car. Then they bought them because they had earned a reputation for being well-built, reliable cars.

Today, people are buying Hyundais because they are great cars, period.

Stack that up against the Camry’s three-year/36,000 mile basic warranty and its five-year/60,000 mile powertrain warranty. Hyundai is confident enough in its products to warranty the Sonata – from wheels to roof – for as long as Toyota dares cover just the Camry’s drivetrain.

Chevy does better with the Malibu; its drivetrain is covered for five years or 100,000 miles, just like the Sonata’s. But the basic warranty Chevy offers on this car is the same skimpy three year/36,000 mile deal Toyota gives you on the Camry.

On the safety front, the only major item not included in the Sonata’s base price is a back-up camera (optional, bundled with the navigation system) and rear seat side-impact air bags (not available).

The Sonata is arguably the best thing going in a mid-large family car under $25k right now. 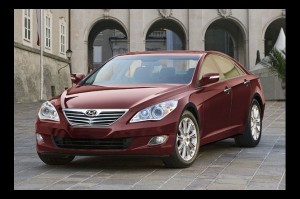