“Bleeding” the brakes just means purging air from inside the lines, master cylinder and wheel cylinders. If the brake pedal feels spongy – especially after you’ve done brake work that involved opening any of the lines – you’ve probably got some air in the system.

Air, unlike brake fluid, can be compressed. That’s is why the pedal drops and feels spongy or soft whenever some gets into the system.

Failure to properly bleed the brakes to remove this trapped air will make your car more difficult to stop.

Bleeding can be done several ways. The traditional two-man method requires one person to depress the brake pedal to the floor while the other opens a bleeder valve (there’s one at each wheel) to let fluid (and air bubbles) escape. Before the pedal is allowed to rise to its normal position, the second person must close the bleeder valve to prevent air from being sucked back in.

This process is repeated several times (as long it takes) until all the air is gone.

During the process, the master cylinder must be kept topped off with fluid; otherwise, it can run dry and then you’ll just suck air into the system that way. Maintain the level at the “full” mark as you proceed.

Also be sure to close the lid on the master cylinder before you start the bleeding pocess. If you don’t, brake fluid will splash everywhere when your assistant depresses the brake pedal. And brake fluid is an extremely effective paint-stripper. It is smart to cover the fender near the master cylinder with a rubber mat; something that won’t let any spilled fluid seep through to contact the paint. If you do accidentally spill any brake fluid on painted surfaces, stop what you’re doing and clean it up immediately. A spray-can detailer such as Honda Clean (http://www.amazon.com/Honda-Spray-Cl…/dp/B00383T62O) can save your car’s finish. Keep it handy.

Some mechanics like to attach a hose to the bleeder valve they’re working on, with the other end immersed in a container filled with brake fluid. This way, they can actually see the air bubbles — and when they stop coming.

Just be careful not to suck old fluid (and air bubbles) back into the system.

Do one wheel at a time; never open more than one bleeder valve at once.

Once you’ve purged all the trapped air from one wheel, move on to the next and repeat. The brake pedal should get firmer as air is removed from the system. Bleed the wheels in pairs – first the fronts then the rears. (Each set is paired and has its own separate fluid reservoir within the master cylinder.)

When all four have been bled and the pedal feel is normal again, the job is done.

Work carefully and take your time. Getting out all the air is all that’s really important.

But what if you don’t have a buddy to help you do the job? Try gravity bleeding. This old standby is quite effective but takes a little more time, a little more patience — and more brake fluid than you’d otherwise need.

Here’s the theory: The master cylinder, which contains the reservoir holding the brake fluid, sits higher up than all four wheels. If you fill the reservoir with fluid and then crack open the bleeder screws, the force of gravity will cause the fluid in the reservior to slowly drain out – forcing any trapped air out along with it.

The only catch here is to be sure you watch the fluid level in the reservior and keep it topped off before it empties out. (This is why you’ll use more brake fluid than if you and a buddy bled the system the regular way.) If you don’t and it gets too low, air will be sucked into the system, and it’s back to square one.

Do the front brakes first, then the rears. Run about two pints through the system and you will have gotten rid of any trapped air and be ready to roll.

When you’re finished, close the bleeder valves snugly (not too tight – they’re easy to break) and put a rubber nipple or vaccum cap over each one to protect it from rusting, and to keep dirt from getting into the orifice.

Vacuum caps can be purchased for less than $5 a pack at any auto parts store.

Another helpful tool for one-man brake work is Speed Bleeders (http://www.speedbleeder.com/). These puppies have an internal one-way check valve that lets fluid out, but doesn’t let air back in. You just crack ’em open and work the brake pedal until all the air is purged from the system. Speed Bleeders replace the factory bleeder screws and install in minutes. 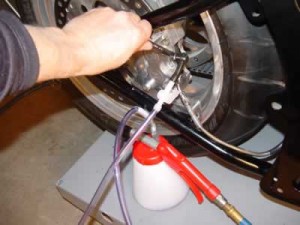