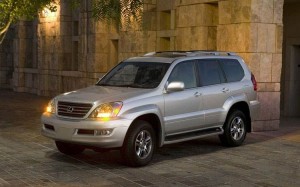 Why would anyone spend fifty grand on a 4WD luxury SUV?

It seems nutty to some of us. After all, you might scratch the paint or get dirt on those nice thick-piled carpets… .

But on the other hand, some people do live in the country; or they have to deal with less-than-great roads and adverse weather. A real-deal 4WD SUV with a transfer case and 4WD low range gearing can be taken off-road, into deep mud or up steep gravel roads covered with snow. A light-duty, car-based “crossover” SUV with all-wheel-drive (and no low-range gearing) isn’t set up for that.

A mid-sized family sedan can do that.

Sure, a V-8 powered SUV is going to eat a lot gas, with mileage typically averaging in the low 20s. But most similar-in-size crossovers usually aren’t much better, despite being a whole lot less capable.

So, there’s still a market – and a rational reason – for buying a real-deal SUV like the Lexus GX460.

The GX460 is one of the last of the big ‘uns – a seven-passenger, three-row, real-deal 4WD SUV with premium amenities and roughneck capabilities.

The current GX is all-new, with significant upgrades to the powertrain and suspension; there are numerous new features, too – including a driver-assist/concierge system similar to GM”s OnStar system.

Big – but not overwhelmingly so.

More subtle than the glitzy LR4; a much better deal than the GL-Class.

Rides like an armored limo; the outside world is far away.

The LR4 costs less, has much more power and higher curb appeal.

Corners like an armored limo; the stability control system has its work cut out for it.

Third row seats are tight and access is awkward, unless you’re a 14 year-old.

These stats put the GX in roughly the middle spot between the hot rod in this segment – the 375 hp LR4 – and the 210 hp Benz GL350. The latter is diesel powered, but its mileage is only marginally better at 17 city and 23 highway.

The LR4 is the uber hog of the bunch, at least in terms of its in-city gas mileage (12 MPGs), although it pulls itself up to 17 on the highway.

Power does have its price.

The GX doesn’t feel as beefy (or top heavy) as the LR4, and it accelerates much more strongly than the diesel-powered GL350, which needs almost 9 seconds to lug itself to 60 mph. (The V-8 powered GL450 is about as quick as the Lexus, but its starting price is almost $10k higher.)

Though it is a large vehicle, it is not massive-feeling. The GX is much less imposing than the LR4 – and its bigger brother in the Lexus lineup, the LX570. Both of those two can be intimidating machines and not just because of their bulk. The LR4 has lots of buttons and switches that can be inscrutable if you’re not a 4×4 Adept. But the GX is pretty straightforward and “get in and go” – with one hideous ergonomic flaw that must be mentioned. The on/off knob for the audio system is located on the lower left of the center console, almost directly in line with the driver’s right knee. It’s convenient to reach by hand, but it is also easy to bump it with your knee while driving – which will turn off the audio system. This might not be a problem if you don’t have long legs, as I do. But take note of this “feature” during your test drive and make sure it isn’t an issue for you or you will be sorry.

Other than that, the GX is an extremely pleasant, easy to drive and easy to live with vehicle. Step-in height is moderate even though there is more than 8 inches of ground clearance. Conveniently placed grab handles (and running boards) further ease entry/exit.

The ride is dead calm and quiet – typical of heavily sound-deadened SUVs with thick-gauge steel bodies and triple seal weatherstripping. Credit for the beautiful ride also should be given to the GX’s standard Kinetic Dynamic Suspension System (KDSS), which continuously adjusts shock damping and suspension travel to best suit road/driving conditions. The optional Adaptive Variable Suspension lets you manually tailor the settings for different driving conditions. This system also includes a load-leveling feature for the rear suspension, which lets you raise or lower the tail by about an inch – for more ground clearance or easier loading access, etc.

But don’t let the GX’s luxo-liner serenity in a straight line – and at high freeway speeds – lull you into thinking this is a car – or a car-based “crossover” SUV. All that 4WD capability underneath you imposes compromises in the corner coming up ahead of you. Take it at a faster clip than you should (which will typically be anything much faster than the posted recommended maximum) and the GX’s electronic stability control system will cut in to remind you what you’re driving. Same thing happens in the LR4 (and also the Benz GL). It’s the nature of these beasts.

Drive it reasonably and you’ll have no problems on-road.

Here also the GX straddles the middle between the boxy/upright traditional SUV look of the LR4 and the almost station wagon-ish Benz GL-Class. It doesn’t call as much attention to itself (which can be a nice thing, especially if you have to drive through not-so-great neighborhoods or park it on the street) while still looking tough enough to put distance between itself and the scores of minivan/familymobile look-alikes out there.

With the GX’s third row in place, the cargo area behind them drops to just 4.2 cubic feet.

Still, the third row (with power folding, standard) does make it feasible to carry seven people – or at least, five adults and two kids. And not everyone needs 80-90-something cubes of cargo space – in which case, the GX’s smaller footprint (and easier maneuverability in close quarters) is a trade-off well worth making.

It comes down to what your needs are: max space – or a more manageable vehicle to drive/park.

One more thing. The GX has an unusual swing-out taligate, which some people don’t like. But some people may prefer this layout to the more common lift-up tailgate – which can be awkward to use if you’re not long-armed (and fairly strong) and which therefore usually requires power assist. The swing-out gate doesn’t.

There’s also a flip-up glass section, which lets you gan access to the GX’s cargo area when you can’t open the gate (as when parked on city streets with another car close behind you).

As everyone knows, Lexus – through parent company Toyota – has taken some rabbit punches to the kidneys recently over the Runaway Prius debacle. The good news is the fallout has forced Toyota/Lexus dealers to be more amenable to haggling after years of being able to cavalierly sell their vehicles at full MSRP. The downside is Lexus’ historically high resale values may suffer, which could end up costing you money at trade-in time.

Still, the GX starts out some $10k less than the Benz GL-Class; and as nice as the new LR4 is, there’s still reason to be cautious about Land Rover the company – whose quality control issues in the recent past make the Toyota/Lexus imbroglio seem like a minor surface blip.

The standard four-year/ 50,000 mile comprehensive warranty is exactly the same as the LR4’s and GL350’s, but Lexus gives you a stronger six year/70,000 mile warranty on the powertrain.

As far as safety: A large, heavy SUV is one of the most crashworthy vehicles you can drive – in terms of protecting you if you’re hit by someone else. The GX’s natural strengths here are supplemented by head/curtain air bags that deploy if the system senses an imminent rollover.

For off-road safety, there’s standard Hill Descent Control as well as Hill Start Assist, which use throttle modulation and automatic brake application to keep the vehicle from building up excessive speed going downhill (HDC) or slip-sliding when trying to climb up an incline (HSA). Lane Departure Warning beeps at you if inadvertently cross over the double yellow. The cruise control system is “adaptive,” which means it adjusts its speed automatically to keep pace with the ebb and flow of traffic – and prevents the GX from exceeding the set speed when descending a grade.

A Pre-Collision system is available optionally that “preps” the vehicle for a possible crash by helping the driver apply full braking power and cinching up the seat belts when a potential crash is detected.

Lexus is also now offering a concierge feature similar to GM’s OnStar. It’s called Eform and like OnStar, it’ll summon an operator to help with directions if you get lost (or can’t figure out the GPS).

If you need (or just want) the capability of a real-deal 4WD SUV, think 300 hp is plenty and don’t really need adult-friendly third-row seats, the GX460 may be “just right” – and just the ticket.