Here’s a classic car with one not-so-careful former owner whose historical logbook is blacker than the tires.

In the days of the Third Reich, Adolf Hitler preened and waved at the faithful from the back seat of this Autobahn-eating monster, before sending them off to die in their millions.

Now the “Swabian Colossus” – one of just three armored Mercedes touring  limos built for the Fuhrer, is on sale in Germany at an asking price of nearly $1 million.

It is the sole survivor of the trio and a mobile link with the country’s darkest days that even the auction house selling it would rather forget.

When Hamburg-based classic-car company Mirbach (not to be confused with car-maker Maybach) announced it had acquired the limousine, the German media went overboard on its Nazi links.

But what is historically fascinating for some is deeply embarrassing for others: The company was furious that what it views as a monumental example of engineering was being overshadowed by the swastika, and has since refused all media requests to view it.

Built in 1935, the Swabian Colossus (named after the former state in which Mercedes corporate HQ is located) was delivered to the Reichs Chancellery in Berlin after being unveiled at the 1936 International Automobile Show.

Costing around 40,000 Reichsmarks at the time (the equivalent of $1.5 million today), it features hand-stitched leather, hand-crafted coachwork and chrome work that cost 7,000 RM alone ($250,000 today).

The car is a modified Mercedes 540 K; only 318 of these were ever produced, including 12 for the government and three “specials” for Hitler.

The Fuhrer had it “panzered” because he feared assassination; hence it weighs close to four tons and can stop machine-gun bullets. The two-inch-thick glass can withstand grenade explosions.

The 540 K was born out of the 500 K, an elegant 1934 sports car with a supercharged Daimler Benz eight-cylinder engine.

It appealed to the well-heeled because it was not only powerful, but also more comfortable and handled better than its predecessors.

This model, used by Hitler until 1943, was known to Germans as Der Paradewagen  – the parade car.

It took him to the Nuremberg rallies and collected British Prime Minister Neville Chamberlain at Munich Airport to transport him to Hitler’s mountain lair, where he was sold “peace in our time.”

After the panzers drove east, Hitler took the car to the outskirts of Warsaw to watch the Luftwaffe crush the city under a hail of bombs.

Less than a year later, he rode the 500 miles from Berlin to Paris in it – his first and last trip to the city.

Another nine examples of the 540 K, offering varying degrees of luxury, were delivered to other Nazi bigwigs;  Luftwaffe chief Hermann Goering had one, as did Reichsfuhrer SS Heinrich Himmler.

Others were simply kept in a carpool to ferry around visiting dignitaries.

At the end of May 1942, SS Obergruppenfuhrer Reinhard Heydrich, Reichsprotecktor of Nazi-occupied Czechoslovakia, was assassinated.

His open-topped Mercedes was not armoured, and Hitler subsequently insisted that all official cars be given the same kind of “anti-terrorist” protection as his.

But by 1943, the day of the Swabian Colossus was drawing to a close. Following the German Sixth Army’s surrender at Stalingrad, the cars that Hitler loved were deemed too ostentatious to use and were rarely seen again.

In the ruins of Berlin at the end of the war, various Chancellery cars were appropriated and dispersed around the world.

This vehicle ended up in Prague and then made its way to Austria, where an unidentified businessman restored it, traced its history and then sold it on to Mirbach. 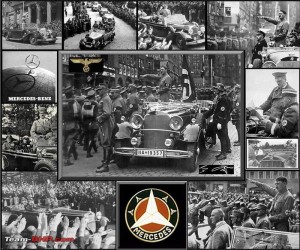