What drove me to attend was my opposition to the constantly increasing growth of government at all levels as well as my belief that both major parties represent more government, not less – and that both parties are shills for corporate America.

* Several speakers made the mistake (my opinion) of criticizing Obamacare as an example of “socialism.” But the use of the state’s police power to force people to pay money to a private, for-profit business is not socialism. It is fascism – by definition. In fact, much of what the federal government does/imposes on us is fascistic more than socialistic (the recent Supreme Court decision affirming corporate “personhood” and “free speech rights,” for example; and the use of terms such as “Homeland Security” and “Patriot” Act – not to mention the actual contents of these acts). But to the average Tea Partier, fascism means Nazis and Hitler salutes; they have no idea that the term itself was invented not by Hitler but by his mentor, Mussolini – who used it to describe the merger of the state with corporations. And that is what we have today in America.

* Affection for authoritarianism.  There was very little criticism of current U.S. militarism and empire. No comprehension that the warfare state is as incompatible with liberty as is the welfare state.
The Tea Party rank and file, based on the T-shirts I saw, appears to be very much of the “support the troops” GOP type.  Which in practical application means: Never criticize any war or aggressive act undertaken by the government. That would be “unpatriotic.” My country, right or wrong.

A telling moment came when one speaker actually said something negative about the disastrous tenure of George W. Bush, calling it – quite correctly – a “dictatorship.” (Bush’s constant invoking of Nine Eleven!  to justify everything from literally dragooning people of the street and Nach Und Nabelling them to some Gitmo Hellhole, indefinitely, without charging them with any crime, to warrantless eavesdropping on Americans’ e-mails and phone calls to his assertion of unprecedented autocratic powers makes this epithet fit as snugly as Bush’s faux flight suit). This comment  resulted in a moment of awkward silence, with the crowd clearly uneasy about the statement.

Despite everything, they still love their Chimp.

* Flag-humping. Out of the blue, toward the start of the rally – the crowd was suddenly made to recite the Pledge of Allegiance. Like well-trained seals, the entire crowd fell into line.

I doubt one out of 100 present knows the origin of the Pledge (look into it, if you don’t; see http://www.cato.org/pub_display.php?pub_id=3296
) or has thought much about the irony of “pledging allegiance” “to the flag” (that is, the symbol of government authority) at a rally ostensibly devoted to the advocacy of individual rights and limited government. This irony was made all the more glaring by the many references to Abe Lincoln – the man who destroyed the original republic in order to establish unlimited-in-principle (and fact) federal supremacy and who waged a genocidal war against the southern states (including the deliberate targeting of the civilian population by the psychopathic William T. Sherman) and who was nothing more than a shill for corporate railroad interests. Lincoln was arguably the prototype for every wheedling, corporate-statist politician since then. But instead of condemning him, the crowd displayed its love for Lincoln – which struck me as not unlike the shrieking, teary expressions of grief you used to see at the funerals of deified thugs such as Stalin, Kim Jong Il and Mao.

* It’s all about money. Several speakers spoke of “running it (that is, government) like a business.” But government is not a business and shouldn’t be in the business of anything except ensuring that individual rights are respected and the rule of law maintained. No speaker said anything directly about the legitimacy of government taking money (and rights) from some in order to “help”others. Instead, the Tea Party people seem to think that “privatization” is the cure for all that ails us – including government functions. Why, just run it like a business and all will be well. They forget that WWII-era Germans ran their government like a business. And it was most efficient.

But the Big Thing that Tea Party people don’t seem to get is that if Big Government is only bad when it is wielded by the Left, then the Right has no principled basis for objecting to Big Government as such. And if the Tea Party represents the political Right (that is, statism for the benefit of a powerful government, empire, etc., as opposed to statism for the benefit of “the poor,” etc. ) then it is doomed for that reason, since you can’t defend a principle you’ve already conceded.

* Also: No mention was made of the immigration issue; or rather of the danger presented by a literal flood of Third Worlders into the United States. I suspect the Tea Party leadership is intimidated by the catcalls of “racism” coming from its opponents. Again, very much like the GOP, the Tea Party seems absolutely terrified of dealing with an issue that is central to the problems we face. And that is the changing racial/ethnic makeup of the country and the inevitable social/political implications of this.

Indeed, at the rally I attended in Roanoke, Va., one of the speakers was a young black woman from The Frederick Douglass Society (I had never heard of this group). She seemed well-intended and sincere. But the hard-boiled fact is that blacks overwhelmingly support Obama and the political left, by margins in the neighborhood of 9-1.

I don’t argue that blacks should be excluded from Tea Party events. I am arguing that is crazy to pretend that blacks don’t support statism by enormous margins (as do Mexican and Central/South American “immigrants”) and that it is unlikely in the extreme that this will ever change. The math is what it is. And it is a fact of reality that people align themselves according to group interests, and these group interests to a great extent form along racial and ethnic lines. You don’t have to like it, but it’s no less true for being an uncomfortable truth.

The GOP notion that America is a “propositional nation” and its disastrous corollary that race/culture is irrelevant (when it’s clearly not) has leached deeply into the consciousness of Tea Party People. Like the GOP, they seem mortified at the very idea of challenging any of the fashionable PC orthodoxies (and idiocies) that amount to national hari-kari. Do they really believe that, say, Somali immigrants are interested in George Washington, Thomas Jefferson and the rest of the legacy of all those Dead White Men? In their hearts, they know it’s bullshit. But they won’t say so openly. Which means, national suicide by default.

As a Libertarian, this made me uncomfortable. I came to the rally to hear about what we can do to get the government off our backs and the parasites out of our pockets.

I didn’t come to praise His Name – or be made to feel I should at least be pretending to. Religion should be left at home and kept private, but the thing about modern evangelical Christianity is that it’s well, evangelical. The good news must be spread. Even when it’s utterly beside the point and probably alienates a lot of people who might otherwise be simpatico.

As with the Flag Humping, the God Talk smelled a lot like the Republican Neo-conned Right to me – Of John McCain and Sarah Palin. Of corporatism and money-grubbing; of “privatization” and the War on Terrah.

And if that’s what the Tea Party is brewing, I’m not interested. 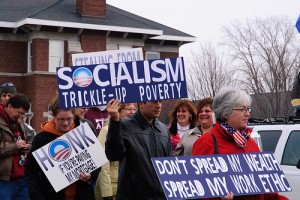