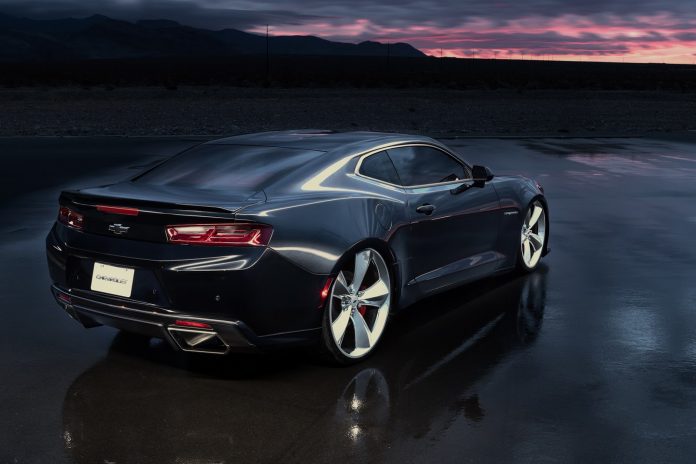 1967 – the first year for the first Camaro – is now 50 years in the rearview. Hard to believe, but there you have it.

At the SEMA show in Las Vegas, some celebratory events kick off the Chevy’s first year of eligibility for an AARP card:

Designers modified the Camaro body to accommodate 22-inch front and 24-inch rear wheels. When it was done rolling in, air shocks deflated to lower it even farther to a parked position.

The black paint includes gloss-white flakes to “add depth and sparkle,” according to Chevrolet. A custom engine cover hides a 455-hp LT1 engine mated to a six-speed manual transmission with Active Rev Match.

The Chevy Chevelle Slammer has the same lowered look as the Camaro SS.

Chevrolet took a 1969 Chevelle and outfitted it with some of its modern goodies.

The Chevelle Slammer’s wheels aren’t as big as those on the Camaro SS — only 18s front and 20s rear — but it has the same lowered look as the Camaro. It also has the Camaro’s air suspension, which lowered it all the way down after the car drove into the show.

The exterior is deep black to offset the “adrenaline” red interior that can be seen from blocks away. But the overall shape is close to the original.

The Camaro Turbo is the autocrossers’ special. It’s cheap, sporting Chevy’s 2.0-liter engine but with upgrades to the suspension, brakes, air intake and exhaust.

The lowering kit — and by the way, most of these parts are available from the Chevy Performance catalog — drops ride height three-quarters of an inch. The company also adds a handling kit with larger stabilizer bars and stiffer suspension links, and a strut tower brace. The AutoX also gets 20-inch concept wheels and a six-piston brake setup with two-piece, slotted rotors. A cold air intake helps the four-banger breathe, while the Chevy Performance exhaust reduces back pressure by 14 percent. The color is aptly named shock yellow, and the stripes are pearl nickel and carbon flash metallic. There’s also a front tow hook, GoPro camera mount, Euro side markers and a new rear spoiler, which makes its debut on the concept.

This was the favorite of many attendees at the Chevy preview. The Alaskan Edition 2500HD gets a massive stainless-steel custom snow plow, showing off the company’s snow-plow-prep package. There’s already a production Alaska Edition offered on the 2017 Silverado HD Work Truck and LT. The concept vehicle here builds on that with that silver-accented blue exterior, grizzly bear graphics, chrome bumper grilles and 20-inch wheels.

The Alaskan gets the company’s next-gen 6.6-liter Duramax V-8 making 445 hp and a blizzard-busting 910 pounds-feet of torque. It also gets chrome bumpers, grille, emblems and trailering mirrors.