A new V-6 Mustang or Camaro gives you about 100 more hp than the V-8 in my Trans-Am put out when it left the Norwood, Ohio line back in the spring of ’76. Either of these new cars could walk away from my old car in a heads-up drag race. The V-6 Mustang, especially. It can do 0-60 in 6.5 seconds. That is quicker than most V-8 muscle cars ever were…  in stock trim.

And that’s the catch.

The new stuff is quick and fast – as delivered. But the old stuff could be made quick and fast – easily and inexpensively. For example, my ’76 Trans-Am. That year, the 455 V-8 produced a pretty pathetic 200 hp – about the same as a current-year four-cylinder engine. But a simple cam swap, exhaust upgrade and power tune could just about double the 455’s output in a weekend – and for about $1,000 in parts (today’s money equivalent). The same applied to the earlier – and much more potent in as-delivered form – muscle cars of the early 70s and mid-late ’60s.

It was possible to go really fast on not much money. 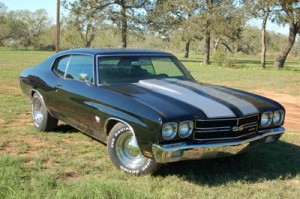 The old stuff had – and still has – other advantages, too. Generally, they’re much lighter than their modern equivalents. For example, a ’69 SS Chevelle. It’s a big car by modern standards – but it only weighed about 3,335 lbs. (see here). A 2013 Camaro SS weighs almost 3,900 lbs. This is the reason the new Camaro SS is relatively slow – 5 seconds to 60 – given an engine that puts of 426 net hp.

Back in the late ’60s – when horsepower was measured (and advertised) using the old SAE gross standard, the current Camaro’s 426 hp would have been adjusted upward by at least 75 and perhaps as much as 100 hp. In other words, the current Camaro’s power would have to be compared – to be compared fairly – with the power made by purpose-built bracket racers in the 500-plus hp (SAE gross) category. Those cars were running 11 second quarters – and more. Yet the new Camaro is slower – as delivered – than a still street-drivable ’69 Yenko Super Camaro with an advertised 425 (SAE gross) hp – which measured by today’s more honest measurement methods would likely  come out to around 375 SAE net hp.

Reason? The new Camaro is a porker. 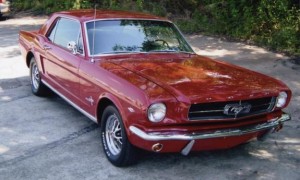 The old stuff was (generally) hundreds of pounds lighter – and lighter always equals quicker, all else being equal. It’s also easier to make a lighter car quicker. The early pony cars – like the first generation Mustang, for example – weighed less than 3,000 lbs. A ’72 Nova only weighed about 3,200 lbs. Put an even mildly strong small-block V-8 (like a 289 Hi-Po) in a car that light and it’s not hard to go fast.

Put another way, imagine how much faster a new Camaro SS would be if it weighed 600 pounds less.

The other thing old muscle cars had in their favor – and still do – is bigger engines. More displacement equals more torque – the oft-neglected red-headed stepbrother of horsepower. Torque – rotational energy – is what gets mass moving. This is especially important in a massive (i.e., heavy) car. And big-inch engines make lots of torque. Even the comparatively weak – by hp standards – 455 V-8 in my ’76 Trans-Am makes a startlingly high amount of torque: 330 lbs.-ft at just 2,000 RPM. The new Camaro’s 3.6 liter V-6 may make 123 more hp than my 455 put out in stock trim (200 hp) but the little V-6 only produces 278 lbs.-ft. of torque at 4,800 RPM. (Which is why, even in stock trim, my car does a much better burnout than a V-6 Camaro.) 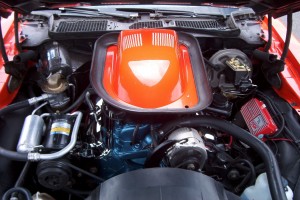 The SS Camaro’s V-8 displaces a mere 6.2 liters – under 400 cubes. And it’s one of the “bigger” modern muscle car engines. The plain truth is no one builds a really big V-8 anymore. (Even the Dodge Viper’s ten-cylinder engine only just barely crests 8 liters – about the same size as a mid-70s 500-cube Cadillac V-8.)

The current crop of V-8s are all medium-sized, equivalent (in displacement) to run-of-the mill 350-ish small block V-8s back in the day. And back in the day, big blocks were routinely putting out close to 500 lbs.-ft. of torque – in mild-street tune. To match that with a modern downsized V-8 inevitably requires turbo or supercharging – which increases the effective displacement of the engine by increasing its capacity to huff air and fuel. Supercharging gooses the torque output of the new Camaro’s 6.2 V-8 to 556 lbs.-ft of torque at 4,200 RPM – or just slightly more than something like a 1970 Buick GSX Stage 1 455 – without the blower – was making. 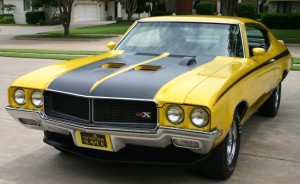 But turbos and superchargers don’t come cheap.  The supercharged 2013 ZL1 Camaro starts at $54,350. For that sum, you could have bought two Buick GSXs back in 1970.

And that’s the rare (and expensive when new, by 1970 standards) Stage 1 GSX. The beauty of the good ol’ days was that anyone who could turn a wrench could make similar power with almost any big-inch V-8, including the low-performance versions used in nothing-special (and so, dirt cheap) mass-market family sedans and station wagons. 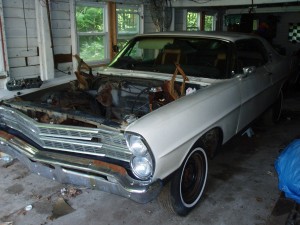 It was a common thing to do, for instance, to hunt down a big sedan or station wagon in the boneyard and pull its 455 or 454 or 440 -put a performance cam in it – and put that puppy into the car of your choice. It could be done cheaply – and easily – two things that anything associated with a new ZL1 Camaro (or Shelby GT500 Mustang)  will never be.

And that’s why the old stuff still rules.