If you were a kid in high school (or college) during the mid-late 1980s – and into fast cars – you probably have a place in your heart for the last full-frame, rear-drive/live axle, carbureted cast-iron V-8 muscle car GM ever made:

It was conceived at a time when memories of the original muscle cars of the 1960s and ’70s still lingered and everyone was hoping maybe they’d make a comeback, somehow.

Ford was the first to take a stab at it with the ’82 Mustang GT. “The Boss is back,” read the ad copy. And it was kinda-sorta true. The car did have a reasonably rumbly 302 V8. But the econo-boxy body (and four-lug wheels) along with the two-barrel carb sitting on top of the trying-hard Ford small-block didn’t quite make it. GM’s Camaro/Firebird twins were ok, too. But they lacked the heavy-hitter presence of the old school stuff. 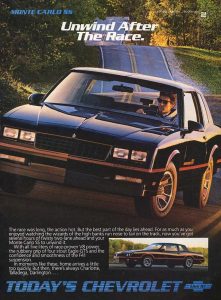 The SS Monte had presence in spades.

Even better, the SS packed the goods to go with the stock car looks. Under that broad, flat hood sat the same basic “L69 HO” 305 cubic inch engine that became the optional engine in the Camaro Z-28 and Pontiac Trans-Am that year. The 5.0 V8 was old-time muscle – from its cast iron block and heads to its aluminum medium-riser intake manifold capped off with a Rochester Quadrajet 750 CFM 4-barrel carburetor.

To bump up the little 305’s output, Chevy fitted this engine with a higher-lift cam from the Corvette’s optional L82 350 V8, upped the compression to 9.5:1 and added a free-flow exhaust system with much-less-restrictive Corvette honeycomb (vs. pellet) catalytic converter and a lower-restriction air cleaner. 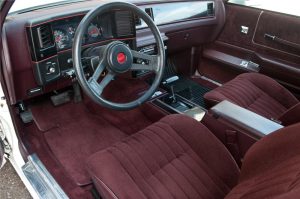 Though this exact same engine was rated at 190 hp in the Z-28, the Monte’s version was downrated slightly, to 180-hp. Probably to avoid annoying the Camaro faithful but also perhaps because the Monte’s version of the L69 305 got a single-snorkel air cleaner while those installed in the same-year  got a dual snorkel.

By the standards of our time – almost 40 years down the road – 180 hp out of 5.0 liters doesn’t seem like very much. But in the early Reagan Years, it was more than just about anything else on the we road was packing.

Only the Corvette had bigger guns. 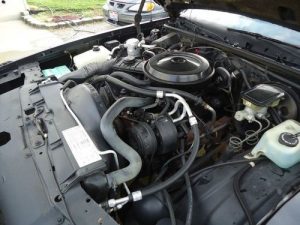 Performance? A stock Monte Carlo SS was good for mid-15 second quarter mile runs and 0-60 blasts under 8 seconds – hot runs for the era. But what made the car so much fun – so much like the big block muscle cars of the past – was the easy tire-frying burnouts (no traction control in those days), the tire-chirping 1-2 upshifts through the specially calibrated automatic transmission and the NASCAR rumble of a straight-up small block V8.

More rumble was easy to install, too. The 305 was, after all, a small block Chevy V8 and all the traditional enhancements of the ’60s worked just as well in the ’80s. A hotter cam and some headers and you had ’60s performance in an ’80s muscle car, with much more comfortable seats and – if you wanted – T-tops. 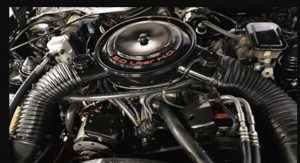 Which let you feel the breeze and hear the sounds.

First year sales were decent – but limited by available production capacity. Only 4,714 examples made it through the pipeline at a base MSRP of $10,474 (which was just slightly more expensive than the ’83 Camaro Z-28’s base price of $10,336).

1984 was much better – with sales increasing nearly six-fold to 24,050. This trend continued into 1985, with sales climbing steadily to a production capacity limited 35,484. Chevy could have sold even more Montes if the two plants where they were built in Arlington, Texas and Pontiac, Michigan had been able to bolt more of them together – but overall, the car’s performance on the lot was every bit as solid as its performance on the street. 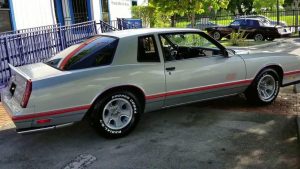 In ’86, Chevy came out with a limited-edition version of the SS called the Aerocoupe – designed with NASCAR competition in mind, just like in the good old days of the Plymouth Superbird and Charger Daytona.

The Aerocoupe was defined by its unique raised rear glass, which followed the roofline back to the tail to cut aerodynamic drag at high speeds. According to published figures, the swept-back “aero” rear glass reduced the car’s drag coefficient relative to the standard notchback SS by nearly 3 percent – a big deal on the high-speed ovals where race versions of the Monte were running. These cars also had a unique ducktail spoiler which provided additional downforce on the car’s rear end – and added to the heavy-breathing stock car ambiance.

’86 was also the first year for standard gas-charged Delco Bilstein shocks and new argent/aluminum 15×7 wheels very similar to the ones first used on the ’80-81 Camaro Z-28. 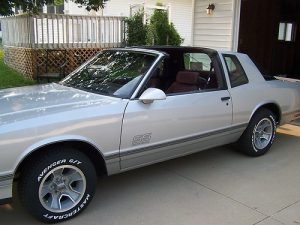 Of the 161,067 SS Monte Carlos produced during the five year run between 1983 and 1988, Aerocoupes are the most rare – 1986 models especially. Just 200 were produced – with another 6,052 built the following year. All were white – with identical options – which would have included the new-for-’86 15×7 aluminum rims with Goodyear Eagle GT tires, F41 sport suspension with high-effort steering and special “SS” decals and stripes.

By this time, unfortunately, sales had begun to slide – down to 16,204. 1988 would be the final year for the Monte Carlo SS – and, sadly, for a rear-drive, V-8 Monte Carlo. Chevy decided the future lay in smaller, front-drive models like the soon-to-be-released Lumina. 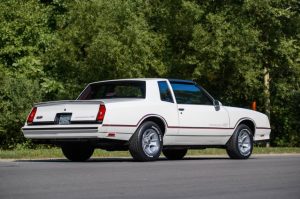 The Monte Carlo nameplate would be revived a few years later – and V8 power would return in 2006 (though in a front-drive configuration and with modern engine controls). But the classic muscle car layout of ’83-’88 was history – too crude for modern tastes; too politically incorrect to pass muster with Uncle

Every now and then, you’ll hear a memory. The sound of an old SS under full steam – Q-jet secondaries opening up, Eagle GT’s skittering on the pavement –  a happy reminder of simpler times, of cheap thrills, of an America that was and maybe, one day, will be again.