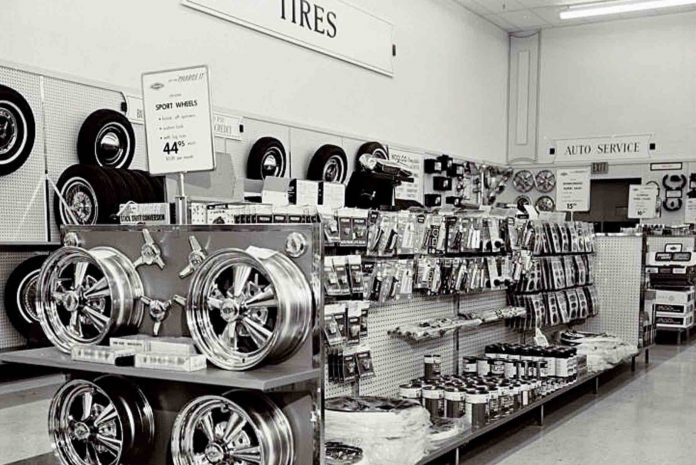 Once upon a time, oil came in cans.

They stacked nicely but made a mess when you tried to extract the oil, which you did by using a punch/funnel. In addition to making a guaranteed mess, you were left at the end of the job with five or six drippy cans that couldn’t be used to store the old oil or for any other thing. So you tossed them – along with lots of oil-mess – into the trash. 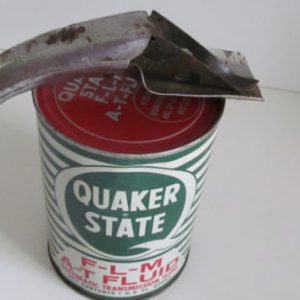 In those days, car parts places also sold steering wheels, to replace the one that came with your car and thereby give it a custom appearance. This was possible because in those days, steering wheels didn’t come with air bags in them – because the government hadn’t yet mandated them.

Cans of Freon were there, too.

You didn’t need to be “certified” to buy them and they cost about $5 a can, too. But Freon got outlawed in the ‘90s – ostensibly because of the Ozone Layer but actually because the patent on the refrigerant was about to expire, which would have cost the patent-holder, the chemical company DuPont, a large sum of money. It made more money by financing its illegalization – multiplying the cost of Freon – and by bringing forth its replacement, R134a.

People who never experienced a Freon AC system have no clue what cold AC means. As in cold enough to frost the vents. Ah well, no more.

Have we lost – or gained? 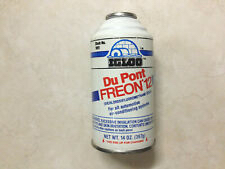 There is less need for parts today, of course – and those who view cars as appliances will probably regard that as a plus. They don’t want to buy parts. They just want the car to work and – for the most part – they do. Back in the ‘70s and ‘80s – and even into the ‘90s, when cars from the ‘70s and ‘80s were still in abundant use – they often didn’t.

And then you needed parts for them.

But these parts were generally inexpensive and – relative to today – easy to install. They didn’t require a computer to anoint their installation – as many modern cars do, in order for the part to work. And it was empowering to know you could fix the car, as opposed to being dependent on someone else to fix it. 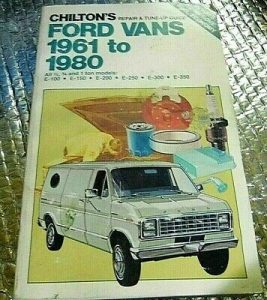 It was also possible to make a part work. If it physically fit, it just might. You could swap intakes, even engines. Today, this is not possible because cars are hard-wired together; the parts are specific to that car and parts from another car will not work even if they fit.

The computer will not permit it.

Oil changes, on the other hand, are far less messy now than they were. Bottles – and jugs – are an indisputable boon. All of the oil goes into the engine rather than partially on the engine. And after you’ve finished pouring the fresh oil in, you can pour the old oil into the bottles/jug and carry them to the recycling place without turning your trunk into the Exxon Valdez.

Catalytic converter test pipes (if you can find them) are still a grand idea – for the cars of the ‘70s, which were crippled by add-on first generation catalytic converters they were never designed to work with. The early cats worked like a cork in a wine bottle; uncorking therefore made good sense – from the standpoint of performance and gas mileage.

It doesn’t make the same sense now because cars have been designed to work with cats since the ‘80s – and removing them can create more problems than it solves, including with the emissions polizei. Plus, the modern car will know you removed the cats and complain about it. Narc you out about it – by flaring the “check engine” light, which will alert the emissions polizei to your malfeasance.

The disappearance of Freon is tragic. 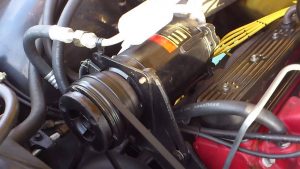 The stuff worked better than any of its government-mandated replacements. This isn’t rose-colored-glasses nostalgic retrospecting, either. Your Libertarian Car Guy owns a car with a Freon AC system – pressurized by a massive GM Harrison compressor that noticeably loads the engine when it cycles on. Some will remember this.

It is capable of refrigerating the interior of my ’76 Trans-Am. Not merely cooling it down to tolerable levels. I demonstrate this to the unbelieving, who come away impressed and believing.

Like the taste of real Coke with sugar – in a bottle – it’s a taste of something no longer made in America.

Or sold at a parts place near you.