You can date yourself by the president who was in office when you were in high school – or by what was happening in the car business when you first learned to drive.

Run through these pop culture signposts on the highway of life and you’ll know about how many miles you’ve got on your odometer!

Do you remember  when …

Instead of today’s convenient plastic bottles, which you twist open and pour just like a bottle of soda, oil came in hard-to-deal-with round cans with tops you had to puncture with a special tool like the ones you use to open up a tin can of pineapple juice. Just opening the can created a gloopy mess. Then you had to get the oil into the engine – which usually created an even bigger mess. Sometimes half the contents of the can wound up on the engine instead of in the engine. And unlike today’s handy, re-sealable bottles, if you didn’t need the full quart, you were stuck with a half-used can of glop with no good way to save the remaining oil – so it went into the trash can and from there to a landfill and from there straight into the groundwater supply. Go, planet!

* When you could buy a catalytic converter “test pipe”?

For about ten years after the introduction of catalytic converters in 1975, the first item on the agenda of hot rodders and those simply looking to make their car run better was to gut those puppies. Unlike today’s cars – which have engines designed to work with emissions controls – the engines of the mid-’70s and early ’80s were mostly carryovers from the pre-emissions 1960s. The emissions gear strapped onto them was an afterthought – and people soon discovered they could get back lost horsepower, mileage and drivability by pulling those parts like a bad tooth. Of course, it was against the law to do it – but people respected the smog police about as much as they did a radar trap. The same attitude defined the company that, for a few years, infamously sold a completely hollow “test pipe” that bolted directly in place of the catalytic converter, allowing the horsepower (and hydrocarbons) to flow freely once again. But like minstrel shows and “Fly Me!” airline ads with pretty young stewardesses instead of swishy flight attendants the “test pipe” is a long-gone piece of the very politically incorrect past. It shall not pass this way again.

* When cars had wing-vent windows?

Cars have been around for more than a century and air conditioning is now an expected given on even the lowest-priced economy car. Before the ’80s, it was still an expensive “luxury” option – even on higher-priced cars – and rare on lower-priced, economy-type models. Many people in those days relied instead on “450” air conditioning – four windows down and 50 mph. And on wing-vent windows – which let the driver modulate the flow of air into and around the car’s interior. Often, the wing-vents were supplemented by a system of cable-actuated ducts inside the car that could be pulled open or closed for more or less air flow. The key, of course, was that you had to keep moving. As population swelled and traffic congealed in and around most major urban and suburban areas, air conditioning became less of a luxury and much more of a necessity. There’s not much breeze at 5 mph in stop and go traffic. And so wing vents have gone the way of 8-tracks  and other relics of the past.

* When you could shift “three on the tree”?

Several 2011 model cars have seven and even eight-speed automatic transmissions, with computerized shift control that canbe adjusted as the driver likes from sporty firm to luxo-smooth at the touch of a button. But if you learned how to drive in the ’60s or ’70s, you may have had to confront the much more challenging “three on the tree” manual transmission. This was a three-speed manual transmission with a (typically very heavy) clutch and the gear shifter mounted on the steering column, instead of  in the center console between the front seats. You’d pull it forward and up for first, straight down for second, then back and up for third. Easy-peasy Japanesy – after you got the hang of it. In between, there would be much wailing and gnashing of teeth. Gears, too. Today’s manuals have six speeds – with easy shift patterns and even easier hydraulically-boosted clutches that don’t require weight-lifter quads to push in and out. But you don’t get the same sense of mastery that you did after learning to smoothly deal with the three-on-the-tree. It was a great way to impress a date, and once you learned how to handle it, you could drive just about anything – from an old F100 pick-up to a front-end loader.

* When CB radios were cool?

If you lived through the era of bell bottom corduroys, Farrah and “Smokey & The Bandit,” you probably remember your “handle” – and drove a car equipped with a Citizens Band radio. For a few years, they were as popular as T-topped Camaros and The Village People – even to the point of being offered as factory-available equipment. It was a kind of low-tech precursor of today’s cell phones and PDAs; you could have a conversation on the go, real-time and “download” important info (such as the looming presence of Ponch and Jon running radar up ahead). But unlike Ponch (“Paunch” nowadays) you rarely see CBs anymore – unless you’re driving a big rig or attending an antique car show. 10-4 good buddy; we’ll catch you on the flip flop at the choke and puke….

* When there was no such thing as a Japanese luxury car?

It’s hard to imagine it from the perspective of today, but before the late 1980s, there were no high-end Japanese cars. No Lexus, no Acura, no Infiniti. Not yet, anyhow. Oldsmobile was still a big player. Slab-sided rear-drive 98s with vinyl roofs and bolt-on fake wire wheels. The number three best seller. Seriously. But in 1986, Honda went for the jugular – launching its Acura brand and the new Legend sedan. In short order, Toyota followed suit with Lexus, then Nissan with its Infiniti line – and the automotive landscape has never been the same. Oldsmobile croaked. Lincoln’s on life support. Only Cadillac survived the mauling – and it’s a relative bit player today compared to the Japanese Hegemony.

If you can remember more than three of these things, you’re well on your way to becoming a “classic” yourself! 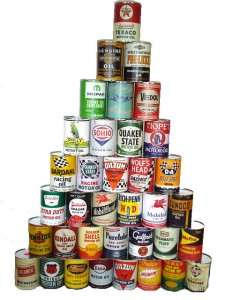