Buying a car was a lot easier when there were just three or four models in any given segment. It was feasible to test drive each one, compare the equipment offered and the price being asked – and come to a reasonable decision.

It’s not so easy when there are three or four times that many different models in any given segment – because it’s just not realistic to test drive each one. And even if you could, they’re often so similar in looks, layout and features – irrespective of brand – that coming up with meaningful differences between “x” and “y” and “z” can be as tough as deciding which brand of toothpaste is best out of the dozen different varieties on the shelf.

This the environment facing buyers – and also carmakers like Volvo – which recently introduced another medium-small crossover wagon, the XC60, to compete in a segment where there are already several established players divvying up the available pool of buyers.

Can the XC60 get any traction?

The Volvo XC60 is a medium-small five-passenger (two rows of seats) crossover sportwagon.

Both the standard 3.2 liter and optional 3.0 liter turbo engine in the T6 get a horsepower boost (5 and 19, respectively). An R Design package (with panorama sunroof, sport-tuned suspension and numerous exterior/interior trim upgrades) is now available.

Much more cargo room than either the EX35 or the X3.

Prices of updated 2011 XC60 starts out only $5 higher than 2010 version. It’s the cheapest 5 horsepower upgrade you’ll likely ever find.

No manual transmission available with the T6 or base 3.2 version.

Some interior styling touches (“floating” center stack) are pretty but not so practical.

Base (non-turbo) 3.2 version is still a little underpowered for its weight and not even in the same league as about-the-same-price base model EX35.

FWD-based layout not as sporty as RWD-based X3 and EX35.

The ’11 XC60 comes standard with a 3.2 liter in-line six rated at 240 hp, a five hp bump over last year. A six-speed “Geartronic” automatic transmission is the only available transmission, but you can go with either front-wheel-drive or (optionally) all-wheel-drive.

The high-performance T6 version comes with a smaller 3 liter engine that’s turbocharged and intercooled, producing 300 hp – a 19 hp bump over last year. This engines comes standard with the same six-speed Geartronic automatic as well as all-wheel-drive.

The turbo’d T6 is much quicker – making the same run in just under 7 seconds.

Both versions have electronic governors that limit top speed to 130 mph.

Mileage with the 3.2 liter engine and front-wheel-drive is 18 city, 25 highway (the latter being 2 MPG less than last year’s quoted highway figure).

Both engines are designed to burn regular (87 octane) unleaded.

Maximum towing capacity with either engine is 3,300 lbs. – decent for a vehicle this size.

Unlike the EX35 and X3 – which are both based on a rear-wheel-drive sport sedan chassis – the XC60 is built around a car-based FWD chassis.

With the weight of the engine and transmission sitting heavy on top of the front wheels – and with the front wheels steering the car as well as putting power to the ground – the XC60 isn’t as well-balanced as the RWD-based Infiniti EX35 and BMW X3.

Still, the XC60 – especially the turbocharged T6 – is a high-performance machine you can use – and get away with using.

Few people know Volvos are sometimes fast; they don’t radiate illegal intentions like the Known Offenders (including the BMW). In the real world, this is a great advantage. What fun, after all, is driving a 300 hp vehicle that gets the stink-eye from every cop? After awhile, the paranoia (and paying off the insurance Mafia) makes you want to forget all about it. Real life is not like a car commercial, where there are no radar traps and you can run 100 mph in a tail-out drift with a hillbilly grin on your face and not end up with multiple Glocks drawn on you.

In real life you can hustle along at 80 on the highway in your T6, tucked in the midst of a pack of cars – and the odds are good it won’t be you the cop decides to pull over.

The base XC60 with the 3.2 liter engine, meanwhile, is borderline slow – even with the 5 hp bump for 2011. At least, relative to the EX35, which comes standard with almost as much power (297 hp) as the much more expensive T6 version of the XC60.

The so-so acceleration isn’t the fault of the 3.2 liter engine (or the excellent six-speed automatic) but rather the inevitable consequence of the XC60’s Flabby Abbey 3,958 pounds of curb weight.

That’s without passengers or the optional AWD system (which bloats  the curb weight to over 4,100 lbs.)

With AWD and two adults on board, the 3.2 liter engine is tasked with moving around 4,300 pounds – about the weight of a current medium-sized V-8 powered SUV.

This is why, incidentally, even the muscular T6 still isn’t as quick as the slightly less powerful EX35: The Infiniti is some 200 pounds lighter at the curb.

Volvo could have bumped the base 3.2 engine to 270 hp or so and that would fix the acceleration issue – but then there’d be a fuel economy issue. As it is, the 5 hp increase has cost 2 MPGs on the highway. Even at this price point, people are conscious of the cost of feeding the beast – and if they’re not, the government is. All automakers will soon have to comply with a 35 MPG average – which puts the brakes on performance. (The T6 gets away with getting less because it’s a low-volume critter and so doesn’t mess up Volvo’s overall numbers too much.)

The only realistic way to improve performance without lowering economy is to cut the fat – which incidentally is just what BMW has done with the redesigned 2011 X3. It’s lighter than the old model, so it’s faster without needing to drink more gas to do it.

This is a good-looking vehicle; modern – but not trying too hard to be.

It still has a recognizably Volvo-ish overall presence but the fairly radical (for Volvo) shape of exterior parts such as the dramatic LED-lit outward L-shaped rear brake lights that drape almost voluptuously along the car’s outward flared rear hips, the scalloped side panels with “bone line” above the door handles and teardrop/swept-back headlights are pretty racy compared with the boxier XC70 and XC90 wagons.

The interior has a few unusual design touches, too – for instance, the anthropomorphic control buttons for the climate control. They’re shaped like a seated person and you touch the head, for example, to direct airflow to your head, the mid section to your torso – and so on. The slimline “floating” center console is pretty from an art-design perspective – but it’s not especially easy to get to the cubby located behind it.

Attractive two-tone upholstery is available; along with the standard pewter-aluminum trim plates, the combo gives the XC60’s cabin a sportier look inside than the typical Volvo, too.

Cargo capacity is 67 cubes – vs.  a puny 18.6 in the EX35 and 27.6 in the new X3. Though those two have the edge when it comes to acceleration and handling, they can’t touch the XC’s everyday usability.

The new-for-2011 R-Design R package (available with either the XC60 3.2 or the performance-minded XC60 T6) includes a massive panorama sunroof, Xenon HID headlights, privacy glass and interior/exterior trim upgrades. If you order the R package with the T6, you’ll also get 20 inch wheels and more aggressive suspension tuning, along with quicker steering gear.

High-end stereo rigs are commonplace now, but the XC60’s available 12 speaker DynAudio unit takes it up a notch; if you’re into music, you’ll want to check it out.

The XC60 also offers a backseat DVD entertainment system with twin LCD monitors, seat heaters for both front and rear seats and an interior air quality monitor with particle filtration. It can seal the car from the outside when, for example, a smelly diesel bus sidles up next to you spewing soot in your direction.

Both the 3.2 and T6 versions of the XC60 have 9.1 inches of ground clearance – close to three inches more than the EX35 – which will help in snow, whether you have FWD or AWD.

The XC60 has some of the latest – and “techie-est” safety features, including an available Collision Avoidance Package that uses sensors to detect an impending collision and automaticallt begins to apply the brakes for you if you fail to do it in time. Included with this package is a Lane Departure Warning System and Blind Spot Warning System – which incorporates warning lights in the outside rearview mirrors.

Just be careful not to damage these as they are hugely expensive to replace.

In addition, the XC60 has a City Safe automatic braking system that does the same basic thing as the Collision Avoidance System, only it’s designed to avoid low-speed fender benders (speeds up to 19 mph). The car will literally stop itself if you don’t touch the brake when the vehicle senses it’s about to hit something.

Set up some cones in an empty parking lot and try it for fun.

This XC60 is very competitively priced – and equipped – with no real weaknesses other than so-so acceleration in the base 3.2 model. The T6 version offers performance comparable to BMW’s X3 for a lot less money – and with much more utility and space than the Infiniti EX35. 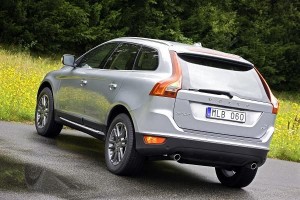