Everyone who knows abut cars knows about the EVO – Mitsubishi Motors’ all-wheel-drive supercar.

The problem for Mitsubishi is the rest of its lineup isn’t as well-known – especially among people who aren’t car freaks, who are the majority of the buying public.

One of these is the Outlander – a sportier take on the mid-sized crossover wagon concept. Mitsubishi’s intent is to lure buyers of Name Brand crossovers like the Toyota RAV4 and Honda CR-V by offering a bit more zip for a few less bucks.

Should you take a look?

The Outlander is a sport-themed, 5-7 passenger crossover SUV with standard third row seating. It is available with either four or six-cylinder engines and FWD or AWD.

Prices begin at $21,995 for the front-wheel-drive ES with 2.4 liter engine and “Sportronic” CVT transmission and run to $27,795 for a performance-minded GT with 3 liter V-6 and performance calibrated AWD system.

Mitsubishi is trying to boost sales of the sport-minded GT version of the Outlander by dropping the price by almost $1,500 (last year’s GT had an MSRP of $29,250).

Base SE models now come standard with third row seating and can be ordered with upgraded leatherette trim.

XLS trims get an updated exterior based on the aggressive shark-nosed look of the GT, as well as standard xenon HID headlights, rain-sensing wipers and aluminum pedals.

Sharper styling than Mrs. Doubtfire  competitors like Toyota’s RAV4 and the Honda CR-V.

Sharper handling than more SUV-esque competitors like the Chevy Equinox.

GT’s a decent deal – and a decent performer.

No manual transmission with either engine.

Base four cylinder engine is underpowered for the weight of the vehicle – especially AWD versions.

Third row is cramped and hard to access – usable by kids only.

Both engines are available with FWD or (optionally) AWD.

The four comes paired with a “Sportronic” Continuously Variable (CVT) automatic; the V-6 comes with a six-speed automatic.

Neither engine is available with a manual transmission.

Performance is just so-so,mostly because of the Outlander’s 3,400 lb. curb weight.

The base SE with four cylinder needs about 9 seconds to reach 60 mph while the V-6 is about a second quicker.

EPA rates the base SE with front-wheel-drive at 21 city, 27 highway; with AWD this drops a bit to 21 city and 25 highway.

V-6 versions are thirstier, but not obnoxiously so. EPA says 19 city, 25 highway for FWD versions and 18 city, 24 highway for AWD-equipped models.

The Outlander’s optional AWD system is significantly different than what you find in competitors – almost all of which are not driver-adjustable and remain in all-wheel-drive all the time, whether it’s needed or not. The Outlander’s system, in contrast, is more like what you’d find in a truck or SUV with a part-time 4WD system in that you can turn a knob on the center console to go from FWD to AWD, as conditions indicate.

Choose the third setting – 4WD Lock – and the system will increase the amount of power kicked back to the rear wheels up to 60 percent.

However, the system does not lock the drivetrain into a permanent/constant 40-60 split, front to rear, as the name suggests.

If only the Outlander had more power – and a six-speed manual transmission (especially with the V-6).

Because otherwise, it’s a lot of fun.

The Lancer/EVO DNA is evident during high-speed cornering, at which the Outlander – especially the GT – excels. The weight of the vehicle doesn’t lurch to outside, squashing down the suspension on that side – with the stability control system frantically trying to keep you from rolling the thing – which happens with some of the less-poised competition.

There’s a nice weight to the steering, too – which tracks directly with the vehicle’s nose instead of being a step ahead or behind.

It’s just that 3,400 pounds (FWD versions; AWD versions are even heavier) is too much bulk for the 168 hp four; even the 230 hp V-6 could use another 30 or so hp to get the Outlander moving swiftly enough in a straight line to match the promise of its athletic image.

Still, the Outlander’s stats stack up favorably against competitors like the very popular Honda CR-V, which does doesn’t offer a V-6 at all – and whose take-it-or-leave-it 2.4 liter, 166 hp engine is less powerful than the Outlander’s base four.

Same thing if you compare the Outlander with SUV-leaning crossovers like the Chevy Equinox. The Chevy is a very nice vehicle but leans farther to the SUV side of the fence, both in terms of how it looks as well as how it drives. It has more standard power (2.4 liters, 182 hp) but no available third row – and less total cargo capacity.

Also, neither the Toyota nor the Honda nor the Chevy offer the driver-controlled AWD system the Outlander does.

The Outlander’s got more visual pizazz than the blandly styled CR-V and RAV4 – or the traditionally SUV-esque Chevy Equinox. The new EVO-inspired forward-canted nosepiece juts out like the snout of a hungry Mako shark.

While the Outlander, RAV and CR-V all have about the same cargo-carrying capacity – 36.2 cubes behind the second row; 73 cubes with the second row folded flat for the Mitsu vs. 36.4/73 cubes for the Toyota and 35.7/73 for the Honda – the Outlander has significantly more ground clearance (8.5 inches) than either the CR-V (7.3 inches) or the RAV4 (7.5 inches), which should be helpful in snow.

Surprisingly, Chevy’s Equinox has less total cargo capacity than all three of these – just 63 cubic feet.

The Outlander’s available folding third-row seat, meanwhile, gives the Mitsu a leg up on the CR-V and Equinox – neither of which offer a third row at all – and equalizes things on this score with the RAV4 (which does). The Outlander’s third row is cramped and pretty much viable only for kids. But it is there – and it does give you the ability to carry up to seven people in a pinch, which neither the Equinox nor the CR-V can do.

The Outlander also offers useful and unique features like a fold-out lower rear section two-piece liftgate. This opens up the cargo area and makes it easier to get big/bulky/heavy items in there, since you don’t have to lift them up and over as much as you do in some competitor’s models. The liftgate can also safely support more than 400 pounds, too – so two normal-sized adults can sit on it if they like.

The area behind the third row seats is deep, wide – and very dog friendly. I carted around two 80 pound Labrador Retrievers during the week I test-drove the Outlander.

The optional Fuse voice command system is similar in operation to others on the market (such as Ford’s Sync). You can use it t make hands-free calls or control the audio system without having to fiddle with manual knobs or buttons.

Mitsubishi’s main weakness relative to its main competitors is a (historically) spottier record on the quality control front, which in turn has really put the arm on the depreciation rates of Mitsubishi vehicles.

Same minimalist coverage on the RAV4 and Chevy Equinox – although the Equinox does come with a five year, 100,000 mile policy on the drivetrain.

Still, the Mitsubishi is the clear leader in terms of backing what it sells. If something does break on the Outlander, you probably won’t have to pay for it – at least, not before you’ve paid the thing off.

With the Toyota, Honda and Chevy – you’re on your own much sooner.

As far as safety stuff, all Outlanders come standard with ABS and stability control, side-impact and curtain air bags, plus anti-whiplash head rests for the driver and front passenger seats.

A rear back-up camera is bundled with the optional navigation system.

Mitsubishi has a good-looking, well-equipped and fun-to-drive vehicle in the Outlander.

It just needs a little more power, an available manual transmission – and for more people to know it exists. 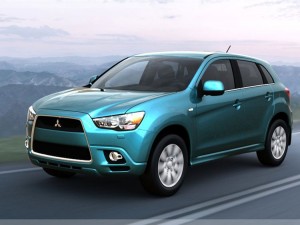