Hyundai routinely pulls the rug out from under the wheels of the established players – especially the name-brand Japanese competition – by offering more car for less money.

No wait, that’s a good thing!

The redesigned Tucson is physically smaller on the outside than most of the “compact” SUVs currently on the market – including the popular Honda CR-V and Nissan Rogue – while offering almost the same amount of room inside.

Throw in a lower sticker price (by $2,065 vs. the $20,810 to start Nissan Rogue and $2,800 vs. the $21,545 to start Honda CR-V) plus a much better warranty, a standard six-speed manual transmission (both the CR-V and he Rogue are automatic-only) and Hyundai is likely to see a lot of interest in the new Tucson.

The Tucson is a five-door/hatchback crossover SUV that’s about six inches shorter overall than current compact-sized crossover SUV competitors like the Honda CR-V (and almost 10 inches shorter nose to tail than a Nissan Rogue) but with almost the same amount of room inside for passengers.

Like the CR-V and Rogue, the Tucson comes only with a four-cylinder engine and is available with either front-wheel-drive or (optionally) all-wheel-drive.

Unlike them, it offers a manual transmission – and a sportier driving experience.

Prices start at $18,745 for the base GL with 2.0 liter engine, front-drive and manual transmission. A top-of-the-line Limited with the larger 2.4 liter engine, automatic transmission and all-wheel-drive has a sticker price of $25,845.

The Tucson was completely redesigned in 2010; the ’11 model is virtually identical except for a few trim/option changes.

More maneuverable and easier to park on crowded city streets.

Better gas mileage than either the CR-V or the Rogue.

Lower MSRP than the competition, too.

Though room for passengers is about the same as you’d get in the CR-V or the Rogue, the Tucson’s got significantly less cargo-carrying capacity than the CR-V (and most other compact crossover SUVs).

Curb weight (3,179 lbs.) is a little on the beefy for four cylinder-only power. With weight-adding automatic transmission and optional AWD (3,500-plus lbs.) the Tucson’s acceleration is sometimes sluggish.

All-wheel-drive is not offered with this engine.

The optional engine (standard in GLS and Limited trims) is an updated version of Hyundai’s 2.4 liter DOHC four-cylinder, tuned to make 176 hp (170 hp in California). It’s available only with the six-speed automatic.

AWD is an extra-cost option.

0-60 in Tucsons equipped with the less powerful 2.0 liter engine takes about 10 seconds. Models with the larger 2.4 liter engine are a bit quicker, but still need about 9.4-9.7 seconds to get to 60.

Fuel economy is better than average, though – relative to the competition.

The AWD-equipped GLS with 2.4 liter engine and six-speed automatic is rated by the EPA at a fairly impressive 22 city and 31 MPGs on the highway. Stack that against 21 city and just 28 highway for the Honda CR-V and 22 city, 27 highway for the Nissan Rogue – both of which come with engines about the same size and offering about the same horsepower/performance.

Buyers’ note: The smaller 2.0 liter actually gets worse gas mileage than the 2.4 liter engine – even though it’s available with a manual transmission. It rates 20 city, 27 highway – it’s fuel economy potential no doubt limited by the effort of hauling around the Tucson’s bulk.

The Tucson’s optional AWD system is called “4WD” by Hyundai but it’s not a truck-based system with Low range gearing so be aware that it’s not really set up for heavy-duty/off-road use. It is a car-based system that’s similar to others on the market and set up for extra traction in inclement weather (rain, snow) on paved roads.

In normal driving, most of the engine’s power is routed to the front wheels, with more power automatically kicked back to the rear wheels when the system detects wheelslip up front. A “lock” feature that lets you lock-in about a 60-40 percent power split, front to rear, for maximum grip.

Trailer-towing capacity is 2,000 pounds, which seems puny, but it’s twice the Rogue’s and 500 pounds more than the CR-V can handle.

The Tucson has a fairly firm, sporty ride and so is more comfortable when driven at a fast pace than the Honda CR-V and most other crossovers. Its big weakness is its weight – a problem that the CR-V and the Rogue also have. With two people on board, the AWD/automatic-equipped versions of all these smallish crossover SUVs need 10-plus seconds to heave themselves to 60 mph, which is right there with a Prius hybrid.

A 10 second 0-60 time is acceptable for a Prius – which is after all essentially an economy car. But it’s less so in a vehicle with a sporty image such as the Tucson. With another 20-25 horsepower – which ought to be possible with tweaks such as direct injection – the Tucson’s straight-line performance would better match its sporty handling and sporty image.

You’ll get the best-possible performance and driving fun out of the current version by sticking with the six-speed manual; the downside is this limits you to front-wheel-drive. If you want the winter-weather capability and better dry-road handling grip of the optional AWD, you have to accept the six-speed automatic. It shifts smartly, but there’s sometimes not enough reserve power available to hide the straining of the over-taxed four cylinder engine when you need to pass someone on the highway or are ascending a steady grade – especially when you’re carry two or three passengers.

Crossover SUVs like the Tucson lean more toward sporty looks over traditional SUV utility – and that’s the case here, too. The Tucson has a high beltline and fairly short side glass, which tapers up into a teardrop shape toward the back. It’s much more rakish than the Honda CR-V, which has a lower beltline and higher roof. The end result is a mixed bag, depending on what matters more to you. The Hyunda is a sharper-looker, but it only has 56 cubic feet of cargo space vs. the Honda’s 73 cubic feet.

Inside, the Tucson has an equally smart-looking interior with icy blue backlit instruments and refreshingly simple controls, including rotary knobs for the climate control and basic pushbuttons for most everything else. There’s no complicated mouse-type device to drive you crazy.

The dash is cut low and sharply canted toward the front glass, which opens up the cabin and makes it feel larger and more open. Helpful “little things” include a pair of 12V power points in the lower portion of the center stack (instead of the usual just one). This is also where the optional MP3 hook-up is, which is more accessible than having it in the glovebox or buried in the center console, as in many other models.

The center console has two grab rails on either side, and a deep storage cubby lies between the seats.

A dual-pane sunroof is optional, though the second panel is fixed in place and does not tilt or slide back.

A six-foot-three, 210 pound man (me) can sit in the back seat without his head hitting the roof or his knees touching the front seatbacks.

You can, for example, pull a small trailer or wood chipper without worry about breaking something (or voiding your warranty).

An optional rearview camera is bundled with the GPS system.

It’s sportier – and it costs significantly less – than its direct competitors.

All it really needs is a bit more gumption under the hood to be the standout model in its segment. 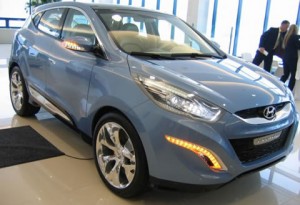