Things have gotten easier on GM-inclined, mid-sized family sedan buyers since the recent “retirement” of Pontiac and Saturn. Where once there were at least three separate GM models to look at, now there’s just one – the Chevy Malibu.

And the Malibu’s only direct competition – if you’re looking to stay with a domestic-brand car – is the Ford Fusion.

So, which to choose?

Its main domestic-brand rival is the $19,695-$28,505 Ford Fusion, which leans a bit more toward the sporty side of the aisle (and also offers an available all-wheel-drive system).

Not as sporty/fun to drive as the Fusion.

Both Malibu engines are paired with a six-speed automatic driving the front wheels.

EPA mileage figures for the ’11 Malibu weren’t yet published at the time of this review, but GM claims the Ecotec four, which features variable valve timing and electric-assist power steering, will deliver 22 mpg in city driving and 33 mpgs on the highway. Those numbers would make make the Malibu one of the most fuel-efficient mid-sized sedans on the market.

As a comparison, the similar Ford Fusion sedan equipped with the 2.5 liter, 175 hp four-cylinder engine, achieves 29 mpg on the highway.

GM says the Malibu’s optional 3.6 liter V-6 (which is basically a detuned version of the same unit found in the current Camaro as well as the Cadillac CTS) can achieve 17 mpg city and 26 mpg on the highway. This engine also features variable valve timing (but steering is assisted by a conventional engine-driven hydraulic pump).

The four-cylinder Malibu takes about 9.5 seconds to go from zero to 60 mph.

Equipped with the more powerful V-6, the Malibu’s 0-60 time drops by nearly three full seconds to 6.5-6.7 seconds or so.

The Malibu has been an American family car favorite for decades, even as the underlying chassis has evolved from rear-wheel-drive (’70s and ’80s) to the current front-wheel-drive layout.

While some things have changed, much remains familiar – most notably the Malibu’s easygoing nature. Even the V-6 version, which is among the quicker cars in this segment, has a relaxed feel to it. Much more so than the Fusion, which has a firmer ride and feels like a smaller car, even though it’s not.

One reason for this is the Malibu’s relatively long wheelbase (112.3 inches), which is nearly as long as the Mercedes E-Class (113.1 inches) and significantly longer than the Ford Fusion’s 107.4 inch wheelbase.

Big cars feel “big” – planted and solid – in part because they have longer wheelbases than stubbier cars. And this is one of the reasons why the Malibu has that appealing big car highway car ride esteemed by several generations of Malibu buyers. The other reason is suspension tuning that’s more relaxed than many of the more sporty-oriented mid-sized sedans out there, including the Fusion. The Malibu’s much closer in terms of its cushy ride quality to something like a Toyota Camry or the new Hyundai Sonata – but wrapped up in all-American sheetmetal.

If your main desire is the best family car in a domestic car, the Malibu is going to win your heart. If you want more Euro-sportiness (handling and ride-wise as well as appearance-wise) the Fusion will probably be more to your liking.

Acceleration-wise, the four-cylinder version of the Malibu feels quicker than its 0-60 time sounds, in part because of the new six-speed automatic. There’s less RPM drop between gear changes than there was with the old four speed automatic and the shifts themselves are snappy and well-timed. This new transmission also comes standard with GM’s steering wheel-mounted TapShift manual shift controls. Tap the “+” button to go up, then “-” to drop down a gear.

With the V-6, a Malibu is about as quick as a early-mid ’90s Mustang GT – which only had about 215 hp to work with from its much larger (and much less fuel-efficient) 5.0 liter V-8 engine. This is a measure of how far, power and performance-wise, we’ve come in the space of just ten or 15 years.

Current mid-sized, V-6 powered family cars like the Malibu are quicker – and stronger – than the V-8 muscle cars of the not-so-long-ago past.

The Malibu’s look is red state conservative – and very American. It is a squared-off, masculine lug of a car.

Many buyers want exactly that – and the Chevy delivers.

Inside, too. There’s a modern-ish, pod-style gauge cluster, but overall the layout is as direct and simple as a John Wayne movie.

No surprises, no weirdness – just straightforward functionality. Large rotary dials to control the AC; big (and easy to understand) buttons for everything else.

Front and rear seat head/legroom is slightly more generous than in the Fusion, too (by about half an inch, in most respects) although the Malibu’s trunk is slightly smaller than Fusion’s (15.1 cubic feet vs. 16.5 cubic feet).

The Malibu doesn’t offer all-wheel-drive (the Fusion does) but Chevy does give buyers standard “turn-by-turn” navigation assistance through the OnStar communication system. This may be the better buy, relative to in-dash GPS systems – which not only tend to cost a small fortune ($1,500-$2,000 is typical) but which are also likely to be technologically out-of-date within a couple of years.

With turn-by turn, you simply call in for assistance with directions; an OnStar operator will guide you to your destination in real time. If you want “real” GPS, you can always buy a Garmin unit for about $400 – much less than the cost of a factory unit – and you can take it with you when you leave the car, too.

Or use it another car.

Another nice little upgrade for 2011 is standard Sirius-XM satellite radio (with USB port for iPod/MP3 players) plus a power driver’s seat with power lumbar adjustment.

Bluetooth wireless, remote engine start and a high-end Bose premium stereo are among the luxury features you can add at extra cost.

You won’t find anything cheesy or sub-par in the Malibu. Most of the materials used are better than average – and nicer than the car’s price range might lead you to expect. This is true across the line today; there are virtually no cars, at any price, that have that early ’80s Blue Lite Special ambiance about them.

The Malibu’s cabin may not be as Euro-modern as, say, a Mazda6 (or the new Hyundai Sonata) but it’s very pleasant overall. The retro-themed (early ’60s Corvette) dual cockpit shape is (again) very American and looks pretty sharp in the available two-tone color schemes Chevy offers.

GM has upped the standard warranty to a very solid five years or 100,000 miles – although the basic warranty remains a little skimpy at three years or 36,000 miles.

The Fusion’s standard warranty is also three years or 36,000 miles – but its powertrain warranty is just five years or 50,000 miles. (I’d be a little nervous about that, if I were looking at an AWD-equipped Fusion.)

GM’s Stabilitrak traction/stability control system, ABS with Panic Brake Assist (primes the system for full power braking force when the system detects an imminent panic stop situation) and front seat side-impact air bags are standard on all Malibu trims. The OnStar system will also automatically summon EMS in the event of a crash.

This is an unpretentious, easy-to-like family car with no significant faults or weaknesses that pretty much sells itself. 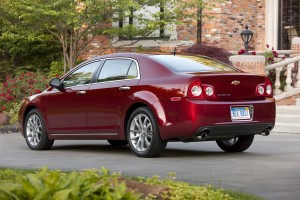